Love Island: What kind of Islander are you? Take our quiz to find out

Are YOUR summer clothes making you look cheap? Elegance coach reveals the 10 items every woman should avoid to look ‘classy’ in the sun – including flip flops and floral dresses

An elegance coach has revealed the popular fashion trends women should avoid embracing this summer if they want to stay looking classy – including rubber flip flops, high waist bikini bottoms and playsuits.

Anna Bey, who lives in London, has racked up over 915,000 subscribers on YouTube thanks to her self-help videos offering advice including etiquette for Zoom calls, dating mistakes as well as how to look expensive.

In her latest video, the Swedish-born ‘School of Affluence’ founder advises women not to follow summer trends that ‘cheapen’ your appearance – despite many gaining popularity after being seen on celebrities and influencers.

She added T-shirts should be swapped for short sleeved tops and it’s better for plus size women to show their curves, rather than to wear baggy items that can make them look larger… 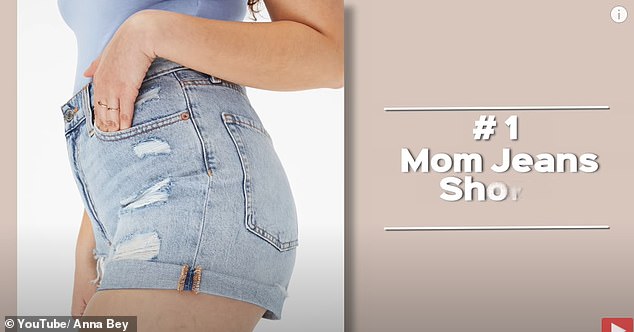 Anna Bey, who lives in London, has revealed a selection of trends women should avoid this summer – including wearing Mom jeans shorts (pictured) and cycling shorts

Anna said women should avoid trends that look too casual as they can ‘downgrade’ your overall appearance.

‘If the mom jeans weren’t already enough, we also have to face the mom jeans shorts in summer time. I’m particularly talking about high-waisted, denim blue and they can also sometimes be light blue,’ Anna said.

‘Think like Levi style types jeans but they are cut off in a way. They might be a little bit ripped but overall these type of jeans, they aren’t really considered elegant.

‘They look very casual, plus jeans in general downgrades a look rather than lifts a look. This doesn’t mean that you can never wear jeans, there are definitely elegant ladies who do wear jeans but it’s a matter of pulling it off the right way.

‘But I often find with mom jean shorts, because they are so high in waist and everything kind of goes up, it sometimes looks like one big diaper or maybe even that you are pregnant.’ 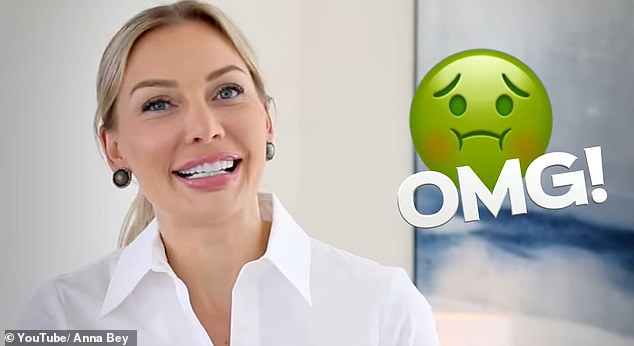 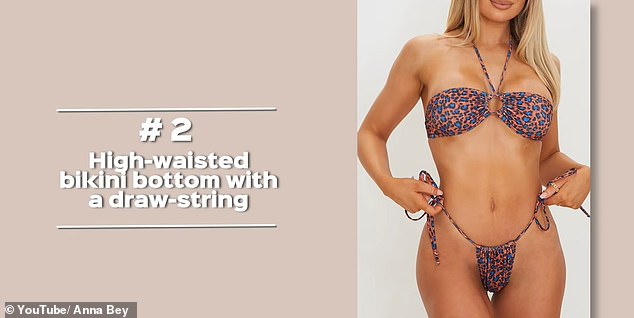 Anna said many influencers and models are wearing high waisted bikini bottoms with a draw string (pictured), but the style should be avoided because it brings attention to the crotch

Anna said: ‘Ladies like to pull it up almost to their ears. I get it, we have this trend right now with this kind of bikini bottoms but this in particular makes me really disgusted, every time I see it on my Instagram feed.

Anna said despite the convenience of wearing rubber flip flops to do errands, it’s best to avoid wearing them unless you’re by a swimming pool or at the beach.

‘What we see around town sometimes is the average Joe wearing her denim blue skinny jeans and her flip flops as she goes shopping or running errands and this is what makes someone look average,’ Anna explained.

‘What you should be wearing instead is a leather sandal. I personally like to wear my Hermes Oran sandals, they are like an elegant version of the flip flop. You can wear them to the beach, to the pool or walking around in town.

‘If you don’t want to spend on Hermes, you can definitely find something similar and cheaper that is made out of leather. ‘

She added that platform flip flop and Birkenstock should also be avoided, saying the latter is unlikely to be seen as attractive or feminine to men.

‘I know many influencers and models wear this type of thing, but ladies it doesn’t matter because every time a lady wears that and she pulls those little things, making that thing look like a proper pad.

The vlogger acknowledged that the look might be better suited to some cultures, but said those who want to be elegant should opt for traditional swimwear that is more covered up.

She continued: ‘Maybe they became popular because ladies really want to elevate their legs but I personally don’t think that it looks good. Less is more in some cases.’

Anna explained how rompers can appear unflattering, saying: ‘The material is often this really cheap cotton and it looks a little bit ugly in the bottom.

‘Also because it’s usually on the shorter side, you can see up the body parts very easily, especially during movement.

‘There is an exception for when this type of playsuit would be somehow acceptable and that is if it’s made out of a different material, maybe more sturdy, tailored or higher end.’

The elegance expert said playsuits are always seen a lot throughout summer, making it too common, not feminine or flattering as well as cheap.

She added that those with an hourglass body shape can also experience a tightness in certain areas when wearing the item. 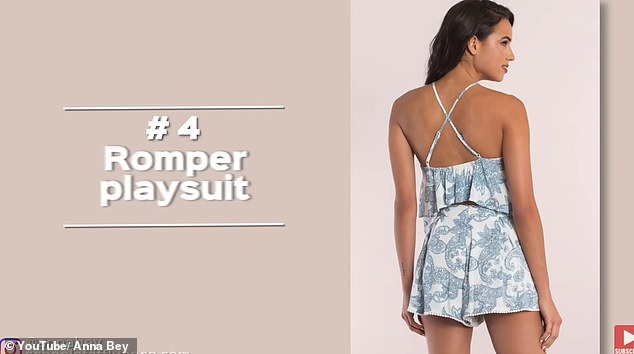 Anna warned playsuits and rompers, like the ones above, can often ride up to reveal more than you would like 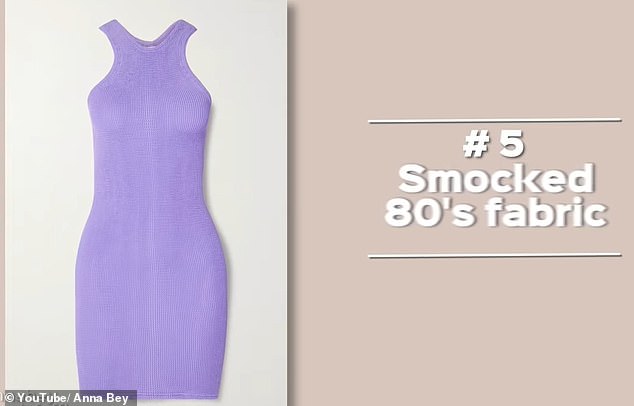 Anna claims this fabric, seen everywhere from dresses to bikinis, will ‘cheapen’ a look

‘If this type of material cheapened Julia Roberts in Pretty Woman, why would it elevate you ladies,’ she said.

‘Stay away from this trendy fabric because I bet you, soon it’s going to be gone with the wind.’ 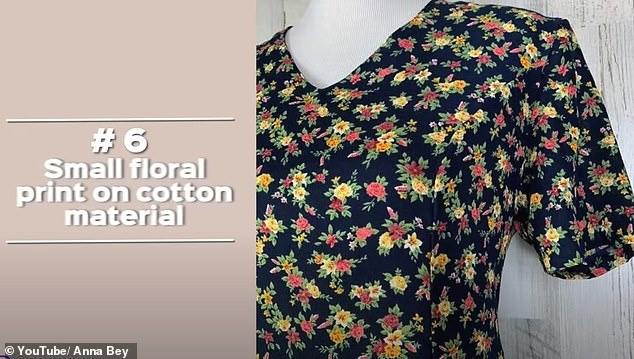 One of the most popular trends for summer, but floral dresses do not escape Anna’s wrath

One of the most popular trends for summer, but floral dresses do not escape Anna’s wrath.

‘We also see women wear a matching little crop top or sports bra with cycling shorts. Ladies I get it if you’re doing sports fine, I would also wear something like that if it’s really hot.

‘But please, why are we wearing it when we go to restaurants and as a regular clothing item. I don’t think it’s appropriate.

‘I think it’s too revealing – maybe on someone who hasn’t hit puberty it might look fine, but any other woman should really think twice before putting that on.

‘The worst is the cotton format. I don’t think the spandex one is that much better but if I really had to choose, I’d probably choose the spandex one.’

Anna went on to add that she wishes the seasonal trend for cotton floral dresses wouldn’t return, saying: ‘The one with very tiny flowers. Often I see it in black with maybe red flowers and a bit of red flowers.

‘You also have it in red with white flowers or maybe some other colour. Every time you see the like small floral print, just stay away.’

She explained because of its popularity, it cheapens a woman’s look instead of making her look elevated. Anna suggested opting for items that aren’t cotton and have bigger flowers to look elegant.

The vlogger also advised against wearing racerback tank tops because they are ‘too casual’ and don’t emphasise a feminine body shape.

‘This is something that should be worn for sports. I’d never wear something like that if I’m going for a meeting or catching up with a girlfriend over a drink.

‘Surely, there are some other tank tops that can still come across as elegant but they are usually in higher quality material, fitted and a little bit more tailored.

‘But generally speaking a tank top is really hard to pull that off. Another thing to be aware off is when ladies wear that racerback tank top with traditionally structured bras – with the strap showing.

‘Sometimes lets say you’re wearing this white tank top and the bra straps are in black. No ladies, not a good look and definitely not an elegant look. If you’re planning to wear this type of racerback tank top ladies, make sure you are wearing a strapless bra.’ 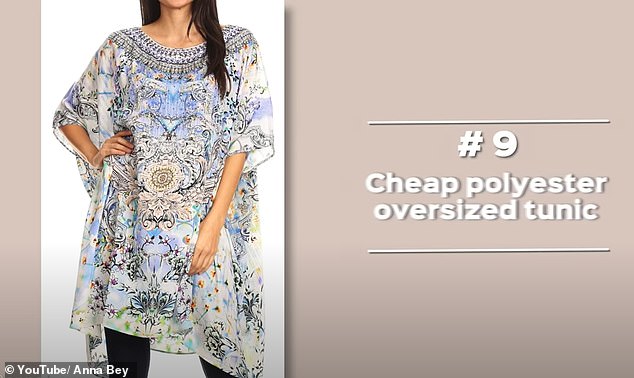 Anna said cheap oversized tunics are frequently seen on middle aged and plus size women, but in reality the item is only suitable for wearing at the beach

Anna said cheap oversized tunics are frequently seen on middle aged and plus size women, but in reality the item is only suitable for wearing at the beach.

‘What sets off my alarm system, is when I see it worn casually as just like a regular garment on the street or when you go to work etc.

‘It’s made out of this really cheap polyester, rougher material that probably costs you £30 in some shops and I just don’t think that’s money well spent. I think it downgrades your appearance and makes you as a a woman look bigger than you are.

‘I understand why many plus size women go for something like that, they think they need to cover up because they are plus size and that is such a big myth. Something I learnt at my image consultant training is do the opposite, show off your curves because that’s going to make you look slimmer.’

Anna went on to recommend against wearing T-shirts because they are too casual to be considered elegant.

‘It’s never baggy on the sides. These two garments are totally different from each other,’ she added.