Charlene Swankie had never heard of Frances McDormand before agreeing to portray a version of herself in “Nomadland.” Focused on getting the shoulder replacement she needed, Swankie was visiting her dear friend Linda May when director Chloé Zhao showed up with a pitch. “I wanted everybody to leave me alone so I could take care of [my shoulder], because what are you going to do with one arm?” Swankie recalled. “You can’t kayak with one arm.”

Zhao promised to accommodate Swankie’s surgery, and Swankie assumed her role in the film would be miniscule. Now, she’s a breakout star in one of award season’s crown jewels. Jessica Bruder, the author of the nonfiction book that inspired “Nomadland,” hosted a Golden Globes viewing party with May and Swankie via Zoom; when Zhao won Best Director, Swankie got so excited she almost hit her head on the ceiling of the cargo van she has lived in for 12 years.

This isn’t your typical Hollywood success story. Most filmmakers would cast trained actors who would abandon their makeup, do a little research, and hope to achieve some semblance of realism. But Zhao isn’t your typical director. She relishes nonprofessional performers, having also worked with novices in 2015’s “Songs My Brothers Taught Me” and 2017’s “The Rider.” McDormand is the first movie star she’s directed, and it’s impossible to imagine anyone else as Fern, the scrappy, placid protagonist of “Nomadland.” Almost everyone appearing opposite McDormand were actual nomads — otherwise known as “van-dwellers” — accustomed to taking whatever short-term employment they can find to stay afloat.

By that measure, “Nomadland” was no different: Swankie and May were paid like any other actor would be. Fame is merely a perk, one that’s changed little about their day-to-day lives. When I spoke with Swankie on Zoom, as coordinated by the movie’s publicists, she was sitting in her van. May, whom I talked to by phone, was at her cabin in New Mexico, where she bought land after years on the road and installed solar electricity, propane heat and a well.

Zhao met May through Bruder, who had first profiled her for a 2014 Harper’s magazine story about older Americans facing economic insecurity in the aftermath of the 2008 financial crisis. Adhering to the philosophies of van-dwelling evangelist Bob Wells, May bought a $1,400 RV and took hourly temp jobs across the Southwest. She soon found online forums where others in her situation shares tips. Swankie, who goes by her last name because that’s what other nomads started calling her, sent May a map directing her to the Rubber Tramp Rendezvous, the same meetup event that Fern attends. “She was there waiting for me when I got there,” May said. “That made me feel welcomed and supported.”

A sense of community binds members of the van-dwelling lifestyle together. Like Fern, a widow saddled with unemployment after a gypsum-plant closure wipes out her entire ZIP code, many have prospered because of the relationships they’ve developed along their routes. Far more than off-the-grid hippiedom, the modern nomad experience is built on fortitude and sustained on friendship.

“They saved my life, I feel like,” 70-year-old May said. “I was at such a low point. No job, and I had entered the age bracket where you were only going to get the low, menial jobs. It didn’t matter to Home Depot that I had a college education, that I was experienced as a contractor, building inspector, plans examiner — that I had all that experience behind me. They made me a cashier, and I totally thought that was because of my age.”

While developing the script, Zhao spent time with May, Swankie and other nomads who wound up in the film. She incorporated their stories into the narrative she was building around McDormand’s fictional character. May and Swankie both deliver powerful monologues about finding hope, with May revealing she once contemplated suicide and Swankie saying she plans to return to Alaska to die in nature. (Borrowing from Swankie’s ex-husband, Zhao gave her character a convincing cancer diagnosis. “One of my sons emailed me and said, ‘Is it true, Mom? I couldn’t tell if you were acting or not,’” Swankie said. “I wanted to go, ‘Hey, Frances, it worked!’”) Neither of them memorized any lines, instead speaking off the cuff. Zhao captured the scenes in single takes, a rarity even for veteran actors.

In fact, May and Swankie never read a full script. Sometimes Zhao would provide an itinerary for the day, but often they were performing on the fly. A lighthearted moment in which Linda and Fern cruise around a campsite in a golf cart was improvised, with McDormand exclaiming, “We be the bitches of the Badlands!” The face masks they wear were administered by Zhao. And when Swankie helps Fern replace a flat tire and offers stern advice about the perils of a transitory existence, McDormand doesn’t say much in response. “I was always wanting her to dialogue with me, argue with me or say something back,” Swankie said. “She never did. It was kind of funny.”

In the screenplay, Zhao describes Swankie as “sharp and energetic.” Swankie, 76, agrees with the latter descriptor, comparing herself to the Energizer Bunny. Touchingly, Zhao calls May “the kind of friend you want to have on the road.” For her, that’s an honor. 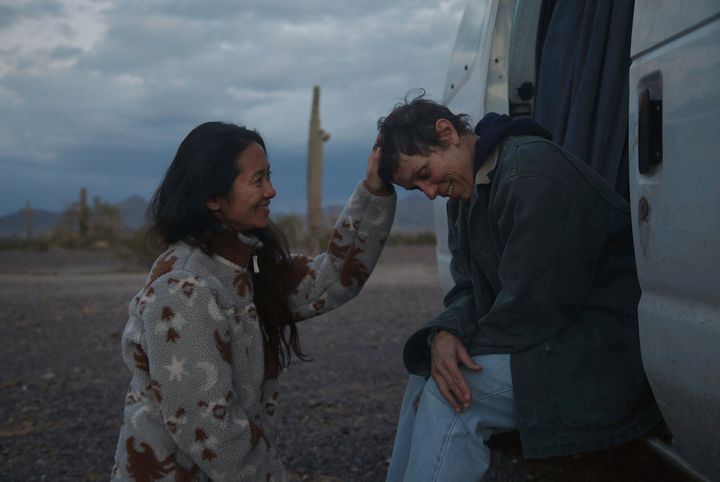 “I hope I can live up to that,” May said. “I really do, because what’s been given to me, I feel like I could never repay.”

She and Swankie stay in touch via text and Facebook. They have a sisterly connection. Bruder checks in on them, too; she helped May construct her house. All of them adore the film, which depicts the nomad experience through rich magic-hour hues. What struck May most was the way it captures both the grittiness and the compassion of van-dwellers. Swankie, on the other hand, had a different takeaway.

“It was sort of all ordinary — just my life,” she said. “It wasn’t any big deal. The thing that struck me the most was the size of my wrinkles, how close that camera came to my wrinkles. That was shocking.”