Federal officials are extending into January a requirement that people on airline flights and public transportation wear face masks, a rule intended to limit the spread of COVID-19.

The Transportation Security Administration's current order was scheduled to expire Sept. 13. An agency spokesman said Tuesday that the mandate will be extended until Jan. 18.

The TSA briefed airline industry representatives on its plan Tuesday and planned to discuss it with airline unions on Wednesday. The mask rule also applies to employees on planes and public transportation.

The mask mandate has been controversial and has led to many encounters between passengers who don't want to wear a mask and flight attendants asked to enforce the rule. The Federal Aviation Administration said Tuesday that airlines have reported 3,889 incidents involving unruly passengers this year, and 2,867 — or 74% — involved refusing to wear a mask.

Individual airlines declined to comment on the Biden administration's decision, and their trade group, Airlines for America, said only that U.S. carriers will strictly enforce the rule. A broader group, the U.S. Travel Association, said the extension "has the travel industry’s full support." The largest union of flight attendants said the move will help keep passengers and aviation workers safe.

"We have a responsibility in aviation to keep everyone safe and do our part to end the pandemic, rather than aid the continuation of it," said Sara Nelson, president of the Association of Flight Attendants. "We all look forward to the day masks are no longer required, but we’re not there yet."

The mask order, based on Centers for Disease Control and Prevention guidelines for responding to the pandemic, was first issued on Jan. 29, days after President Biden took office. Before that, airlines had their own requirements for face coverings but former President Trump's administration had declined to make it a federal rule.

The extension was not surprising after a recent surge in COVID-19 cases linked to the delta variant of the virus. The seven-day average of new reported cases has topped 140,000, an increase of 64% from two weeks ago and the highest level in more than six months. 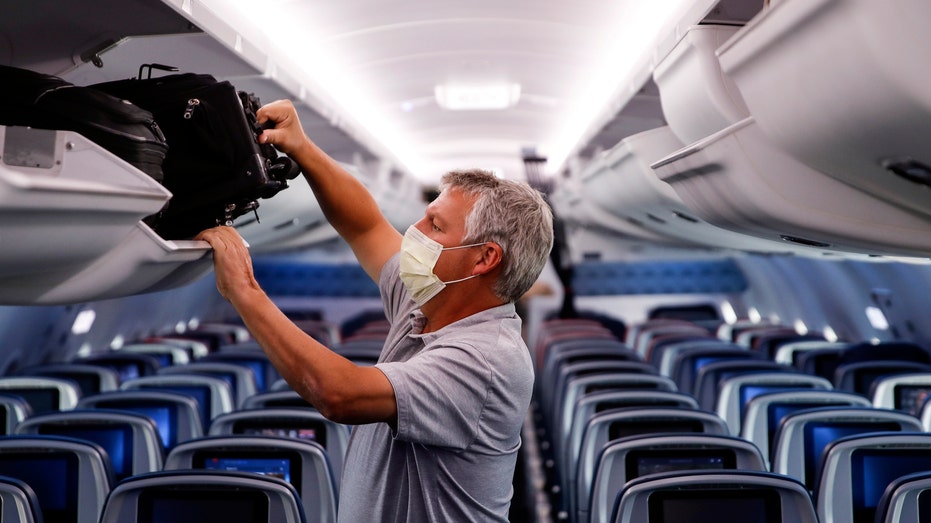 In this May 28, 2020, file photo, a passenger wears personal protective equipment on a Delta Airlines flight after landing at Minneapolis−Saint Paul International Airport in Minneapolis. (AP Photo/John Minchillo, File)

Henry Harteveldt, a travel-industry analyst with Atmosphere Research Group, said the administration's decision will reassure people who are concerned about the virus.

"I anticipate it will make them feel more confident about traveling through the fall and winter, including the holiday season," Harteveldt said. "Those who don’t take the virus seriously will probably complain — but they have no choice but to suck it up and wear their masks if they want to take an airline flight somewhere."

In recent days, Southwest Airlines, Spirit Airlines and Frontier Airlines have reported that the increase in coronavirus infections has caused a slump in bookings beyond the usual slowdown that occurs near the end of each summer.