With the Tokyo Olympics a month away, over 35 U.S. gymnasts have flocked to St. Louis, Missouri, for their chance to earn a coveted spot on the U.S. Olympic Team.

Trials start Thursday, June 24 at The Dome at America's Center and conclude Sunday, June 27. Both the men's and women's teams will be finalized by the end of competition.

There are six spots for the women – four team competitors and two individuals – and five for the men. Jade Carey has already accepted one of the two available individual spots on the women's team.

Simone Biles, the four-time Olympic gold medalist, is an obvious one to watch throughout the competition, but her World Champions Centre teammate Jordan Chiles should also be on spectators' must-see list as she competes for her first Olympic berth. 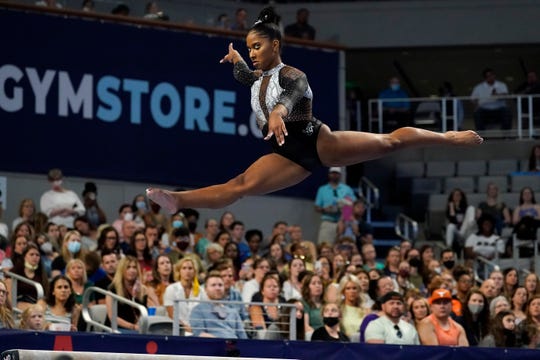 Chiles placed third in the all-around competition at the U.S. Gymnastics Championships in Fort Worth, Texas, earlier this month. She was 0.500 behind second-place finisher Sunisa Lee, who will also be trying for her first Olympic spot at the trials.

In the men's competition, two-time Olympian Sam Mikulak is looking to return to the Games. New national champion Brody Malone and Yul Moldauer are trying to make their first Olympic teams.

Here's all the info you need to follow along with these Olympic hopefuls and more:

When are the gymnastics Olympic trials?

The men begin competition on Thursday night, and the women on Friday night.

Preliminary start lists show Mikulak and Shane Wiskus, a member of the 2019 world team, are in the same rotation, starting on vault. Muldauer begins on parallel bars, while Malone starts on high bar.

Biles, Chiles and Lee are all in the same rotation, and they begin on uneven bars. Carey and Riley McCusker, a member of the 2018 world team, are in the other rotation, which begins on vault.

Brody Malone competes on the parallel bars during the Men's Senior competition of the U. S. Gymnastics Championships at Dickies Arena on June 05, 2021 in Fort Worth, Texas. (Photo: Jamie Squire, Getty Images)

How to watch gymnastics trials

The final day of competition and medal ceremonies for both men's and women's events will be broadcast live on NBC. The men's broadcast begins at 4:00 p.m. ET Saturday, and the women's at 8:30 p.m. ET on Sunday, June 27. The full television schedule is as follows:

Events will be streamed on both NBCOlympics.com and NBC's Peacock streaming platform.