Viewers slam picky parents who have seen over 100 houses in their quest for a property close to outstanding secondary schools for their 17-month-old son on Location, location, location

TJ and Chee, from Malaysia, appeared on the Channel 4 programme last night as they hunted for a home in Winchester within their £550,000 budget, insisting they had to be close to outstanding secondary school for their 17-month-old son.

But the couple found complaints with all four houses they viewed on the show,  with TJ even questioning the position of light fittings in an otherwise perfect property.

Viewers were unimpressed by their attitude towards their househunt, with one commenting: ‘Why do people let their children influence the house they buy!’ 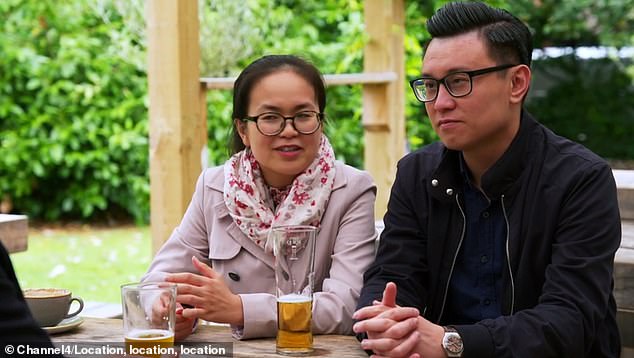 TJ and Chee, from Malaysia, appeared on Location, location, location last night as they hunted for their dream home in Winchester. But the picky parents left viewers unimpressed with their demanding attitude to the search

Another wrote: ‘The house is perfect apart from the fact that the ceiling light is shining in my eyes when I lay down and stare directly at it. FFS.’

TJ and Chee, who are both chemical engineers, relocated from Malaysia to live in Teeside but struggled to find a winning formula for homes in the north.

They viewed 96 properties while on their property hunt, but said that the search ‘wasn’t realistic when they have a little one.’

The couple then moved to Winchester for work, and viewed another 30 properties in the area to try to find the perfect family home. 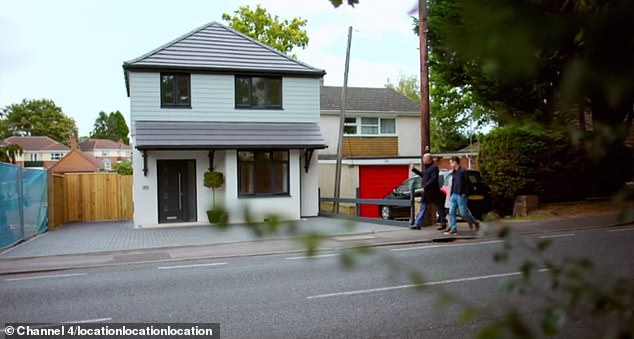 TJ and Chee were impressed by the interior of the first three-bedroom property they viewed, but said they didn’t like how close it was to an open road 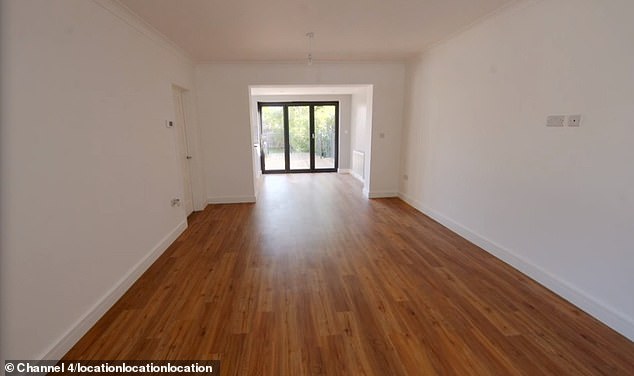 The first property the couple viewed was a stunning modern home which had been newly renovated by a developer (pictured, the large living area)

They wanted to be close to outstanding schools for their son Uzo but getting into catchment areas easily adds £40k to the average price tag.

Chee revealed: ‘We’re having to readjust our expectations very quickly in a very short time. It’s proving to be very challenging.’

Meanwhile TJ admitted: ‘Once we get to the second viewing, the house is normally gone.

‘You’re buying a house but you only have half an hour to decide to buy the largest item in your whole life.’ 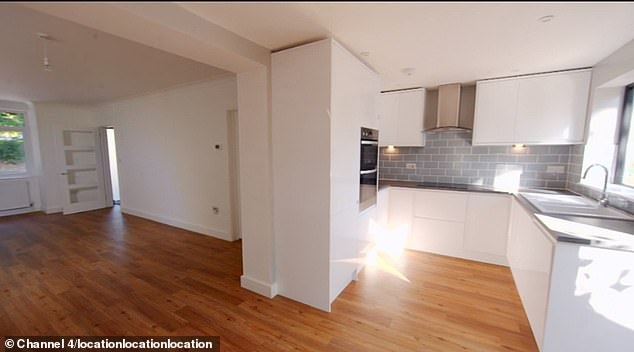 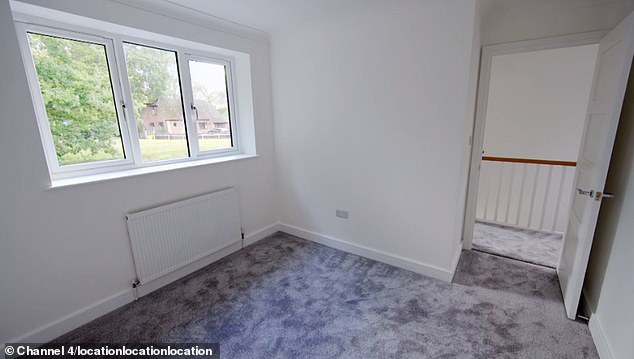 But despite liking the modern look of the home, the duo admitted they had their reservations about the size of the bedrooms upstairs (picked, one of the three bedrooms)

Chee admitted: ‘I think we are both quite indecisive at times and TJ does consider a lot more things.

Chee told Phil: ‘We need your help to look past some of the things we can’t see past. We had £400,000 before but we thought, that’s not realistic.’

Now the couple have managed to push their budget to £550,000, but Phil explained it still might not be enough for their perfect home.

He revealed: ‘The thing with this area is the schools are exceptional so people flock to them and push the price up. 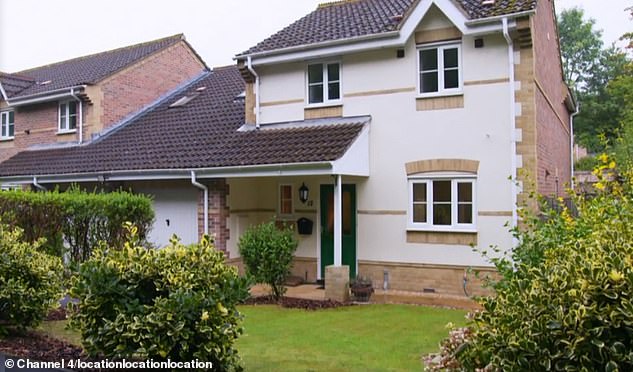 The couple went on to view a second semi-detached home with three reception rooms for a £415,000 guide price

‘I can put you in front of houses and I can say this is what you can do with them.’

They wanted 3 or 4 bedrooms for visiting guests, a home office so that TJ could work from home and a large dining kitchen area.

They also wanted a family sized garden and would like to be within an outstanding school catchment area which is ‘key’ to their property hunt.

The first home they viewed was a £525,000 open-plan modern home, with a great sized garden. 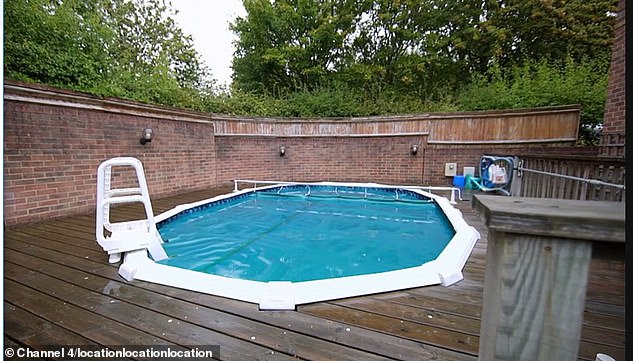 Unusually, the house also had a pool in the back garden, but the couple admitted it left them unimpressed 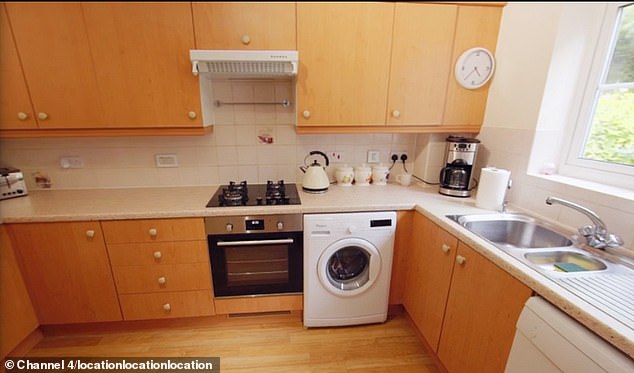 There was also a small outbuilding, which could be converted into a home office, plus three bedrooms, one of which has an ensuite.

Chee said: ‘I couldn’t take my eyes off the road. We feel very positive about the back compared to the front.’

But they were unimpressed by the size of the children’s bedroom, as well as the position of the light fitting in the master bedroom. 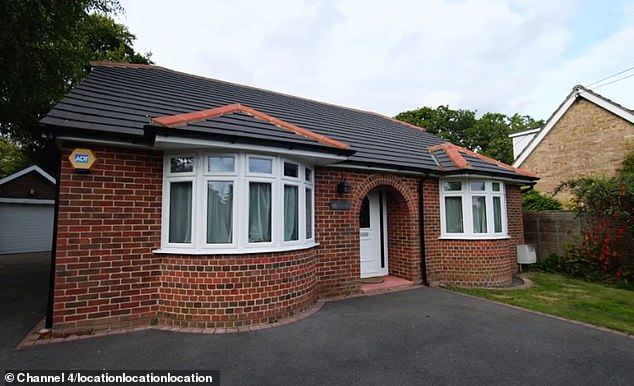 Their third viewing was a modest five-bedroom bungalow in a peaceful area on the market for £550,000 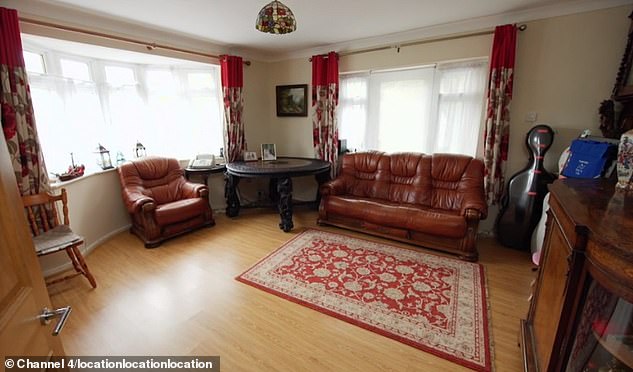 But TJ admitted she couldn’t imagine her family in the space, and declared the living room was too small for the trio

The second home the couple viewed had potential with renovation work, with three reception rooms and a small kitchen.

Unusually, the house also came with a swimming pool and quickly made a splash for the couple with a £415,000 guide price.

But the picky pair said they were unsure about the pool, and were unimpressed by the kitchen-dining room area.

And they explained that they wouldn’t consider the house due to its proximity to the main road.

Chee and TJ’s  final viewing was at a a £435,000 three bedroom chalet bungalow in a cosy neighbourhood 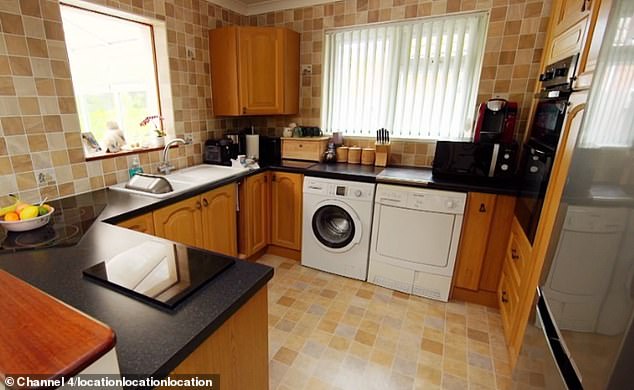 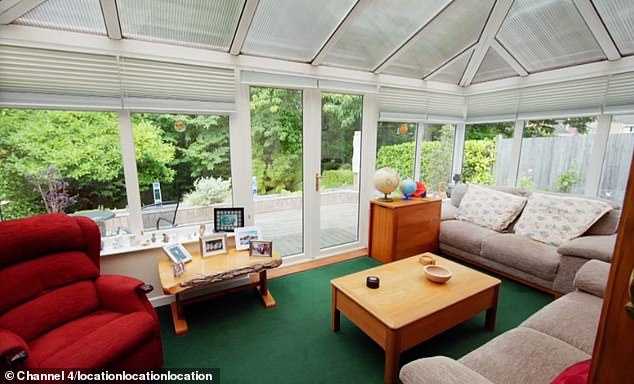 Chee admitted his wife didn’t have an ’emotional connection’ to the property, with the duo complaining of the size of the rooms and dated interiors

Meanwhile their third viewing was a modest bungalow in a peaceful area, with Chee saying he liked the privacy of the five-bedroom £550,000 property.

But  TJ admitted she didn’t like the size of the living room and Chee said he felt his wife didn’t have an ’emotional connection’ to the home.

They felt that the dated and dim property needed too much work for them both to undertake. 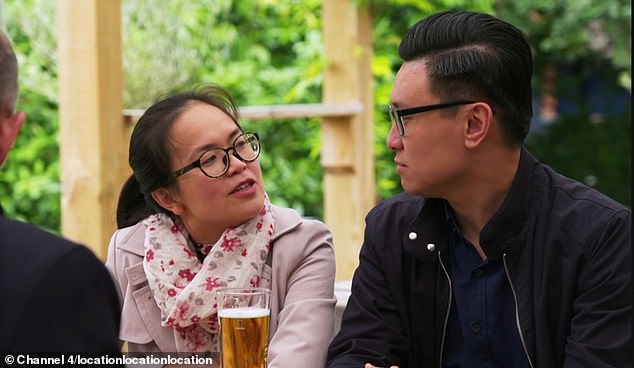 Chee and TJ ended up turning down all of the houses on the programme, before restarting their own search and finding a four bedroom top home in their topspot area.

But viewers were unimpressed with their attitude towards househunting, with one commenting: ‘ Lays down and looks at the ceiling,”The light is in my eyes”. Wow.’

Another added: ‘She’s doing my head in, from the moment she laid on the floor and analysed the light I knew she was a d***.’

Another wrote: ‘I knew they wouldn’t end up in property 1….the light fitting was in the wrong place remember!’ 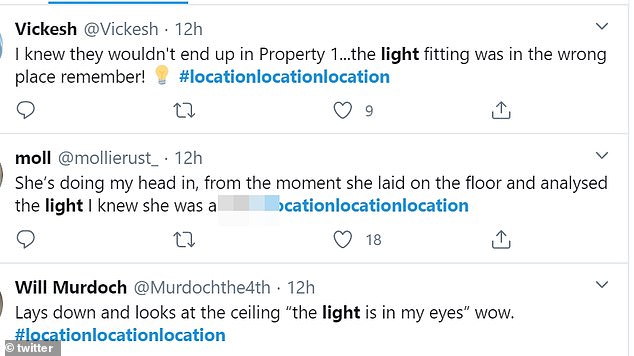