After nearly two years of the pandemic dominating our political discourse, the return to “politics as usual” in Canberra was hard to watch. Politics has always been a robust affair, a clash of ideas and ideology. But this was different. It was chaotic, it was bereft of policy and the displays of bad behaviour were abhorrent.

For a party trying to win its fourth election in a row, the signs were not great. Prime Minister Scott Morrison faced open rebellion from at least seven MPs, not in the backrooms where such disputes are usually settled, but on the floors of the House and the Senate. 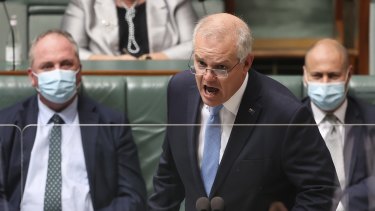 And it was not only the conservatives who were willing to take a stand so publicly, most notably over state vaccine mandates; the moderates have also found their voice again. After convincing Mr Morrison to back a net zero emissions target, the emboldened faction was having none of the Religious Discrimination Bill without assurances that religious schools would not be permitted to expel students because of their sexuality.

And while the Prime Minister put his weight behind the discrimination bill, he did his best to bury his promise to establish a national integrity commission. It was Bridget Archer, the member for Bass in northern Tasmania, who embarrassed the Prime Minister by showing courage when she crossed the floor in a failed bid to bring on a debate on a stronger integrity commission, as proposed by Helen Haines, the independent member for Indi in Victoria.

The low point of the week had nothing to do with policy, and everything to do with personal behaviour. Sex Discrimination Commissioner Kate Jenkins’ report on workplace culture at Parliament House finally shone a bright light on bullying and sexual harassment, which have become almost commonplace. It also highlighted allegations of actual or attempted sexual assault.

Ms Jenkins was not shy in pointing the finger. As one person was quoted as saying: “There are no ramifications for bad behaviour because there is no risk of MPs getting fired or otherwise being held accountable for their actions.” The report spells out a thorough list of recommendations that would provide better mechanisms to support victims and investigate bad behaviour. There can be no excuse not to implement them.

The urgent need for a more transparent and accountable system was evident just days after the report was released when former Liberal adviser Rachelle Miller claimed that an affair she had with her former boss, Education Minister Alan Tudge, was emotionally abusive and, on one occasion, physically abusive. Mr Tudge has denied the claims, but Mr Morrison was quick to suspend him from his ministerial duties until the matter is investigated. The mood on this issue has shifted greatly this year and, politically, Mr Morrison had little choice.

With only a few months before the federal election, both major parties have plenty of convincing ahead of them. The polls may favour Labor, but Anthony Albanese’s reticence to put too much policy on the table until the election nears could backfire if voters don’t like what they see. On Friday, Labor’s new target to cut greenhouse gas emissions by 43 per cent by 2030 was a signal that Mr Albanese is likely to be cautious.

On the other hand, Mr Morrison’s efforts during the previous election demonstrated his formidable talents on the hustings. It would be a mistake to write off the Coalition based on its recent performance. But one thing is for sure. Our politicians, all of them, need to do better than what we witnessed during the past two weeks. The nation needs and deserves so much more.