Premier Daniel Andrews has rubbished the prospect of an audit into his multibillion-dollar Suburban Rail Loop, arguing his 2018 election win gave his government a mandate to build what would be the largest project in Australian history.

“We’ve had an audit – it’s called an election,” he said, referring to Labor’s landslide 2018 win when the loop was among his party’s pledges. 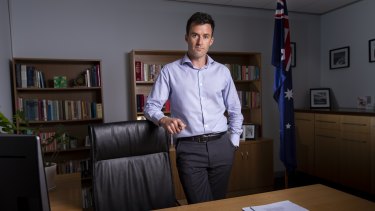 “I put it forward to the Victorian community last time, and they voted for it in unprecedented terms.”

Opposition transport infrastructure spokesman Matt Bach told the Sunday Age that, while his party would honour any contracts signed for the first section from Cheltenham to Box Hill, the entire rail link to Melbourne Airport and then Werribee would be immediately audited if the Coalition won power in November. The project could be amended or future sections could be scrapped.

Reiterating his policy on Sunday, the upper house Liberal MP told reporters the Premier’s response to the audit proposal was predictably arrogant. “This hasn’t gone through his cabinet. Where’s the money coming from? Where’s the $100 billion coming from?” he said.

“I, and the Liberals and Nationals, are entirely in favour of much better connections between the spokes in metro Melbourne’s hub and spoke rail model. And yet, I’m not going to write a blank cheque today of $100 billion to Daniel Andrews to implement the later stages that have no business case, no funding, no costings, and haven’t even gone through a cabinet process.”

Bach told the Sunday Age the opposition’s worries about the project stemmed largely from an Age investigation last August detailing the secretive and unorthodox conception of the loop, which was led by consultants at PwC and shut out the Transport Department and all but a handful of cabinet ministers. He also raised the prospect the idea was “cooked up” to win marginal seats in the eastern suburbs.

The Coalition’s stance is also informed by reports from the auditor-general suggesting a key reason for blowouts on Victorian projects was deficiencies in early planning.

Bach’s comments set the scene for a new Victorian infrastructure war, with the Coalition pledging to revive the East West Link tollway and Labor relying on the fact it won the 2018 poll after pitching the rail loop to the electorate.

The government says the cost-benefit ratio for the first two stages suggests that for every $1 spent on the project, between $1.10 and $1.70 would be returned.

A 400-page investment case released last year showed just two sections of the line in the east and north-east could cost $50 billion and would not be completed until 2053. 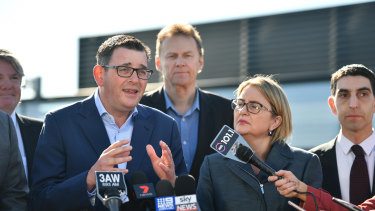 Some transport experts believe the project will cost closer to $100 billion, but the government does not believe it will cost this much.

The opposition will subject all major projects worth more than $100 million to an audit. Some of Labor’s projects are billions over budget and years behind schedule, and Bach claimed there was up to $24 billion in cost blowouts that could have been used to help alleviate what he called the state’s “health crisis”.