I’m going to let you in on a little secret. That lovely purple ice cream you see just above isn’t black raspberry flavored. It’s made of a vegetable called ube (pronounced “ooh-bae”). And no, this isn’t, a black bean brownie situation where someone just decided to try to make dessert “healthy.” Ube has been used for desserts in Filipino culture for a long time–it’s very time tested and taste approved.

Thanks to the plant-based diet movement (and increasing access to fruits and vegetables from other parts of the world), the unique eat has made its way onto many a plate (and newsfeed since its so photogenic). And I, for one, am so excited about that.

There’s only so much broccoli you can eat and tbh, sometimes I’d rather not eat the same old thing again. But, adding new vegetables, like ube, to your diet makes getting your daily dose of the good stuff so much easier and wayyy more fun.

You already know how important it is to eat a diverse array of plants, including ones across the rainbow. “Including a variety of fruits and vegetables makes meals more colorful and flavorful and provides all of the antioxidants and phytonutrients your body needs to thrive,”says Stephanie McKercher, RDN, dietitian and plant-based food blogger at GratefulGrazer.

This veggie isn’t just any old root vegetable. Although it is similar to taro and sweet potatoes, it is neither. It is its own thing that is about to become your new fave veggie, new fave addition to dishes and desserts, and new fave color. (I highly recommend googling ube desserts 😋).

Ready to meet your new purple bestie and step up your veggie game? Here’s what you need to know about ube. 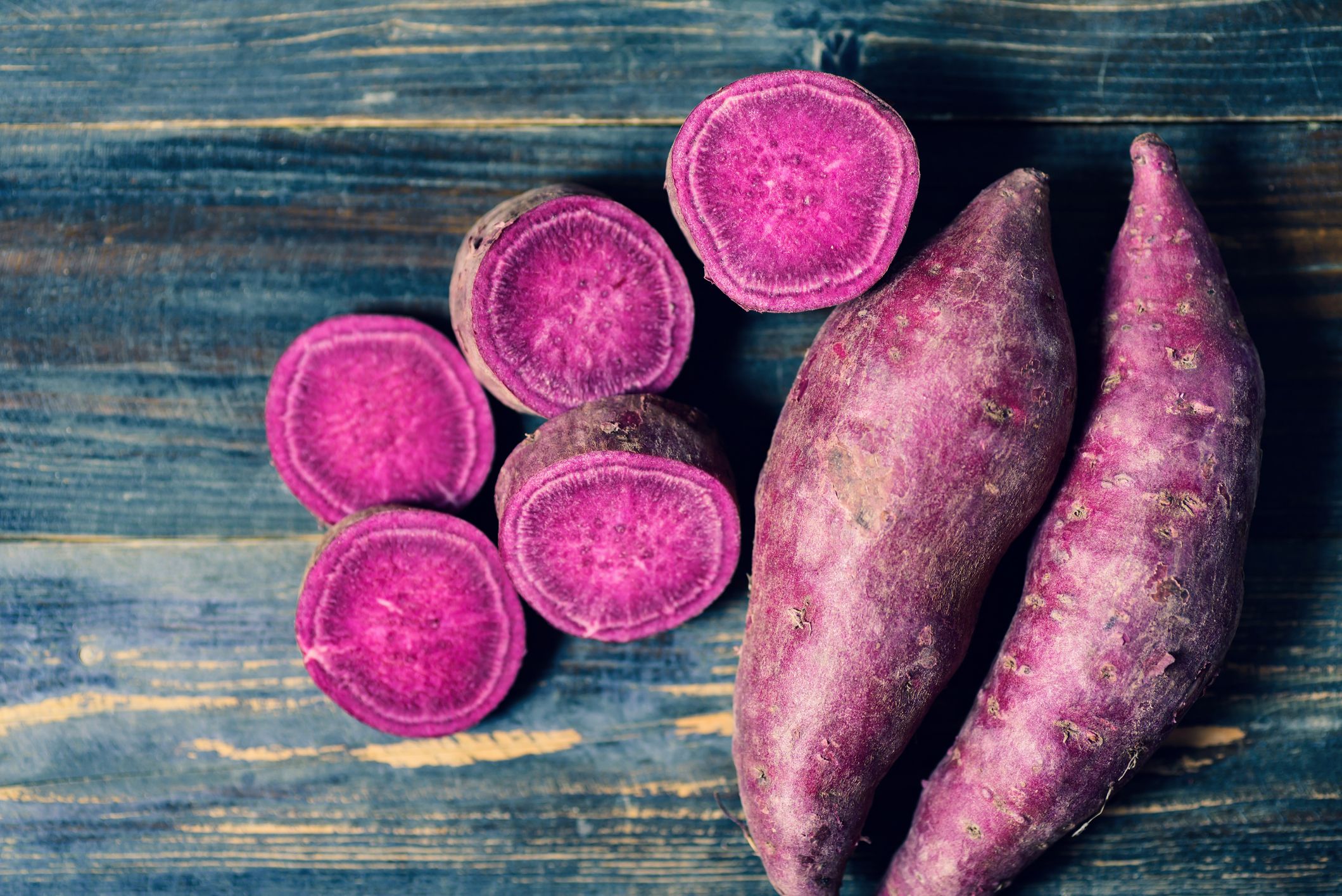 Hold up. What Is ube, exactly?

Ube is a purple spud related to the orange sweet potatoes you probably already eat on the reg. Though similar to sweet taters in shape and size, ube has darker skin and deep purple flesh. 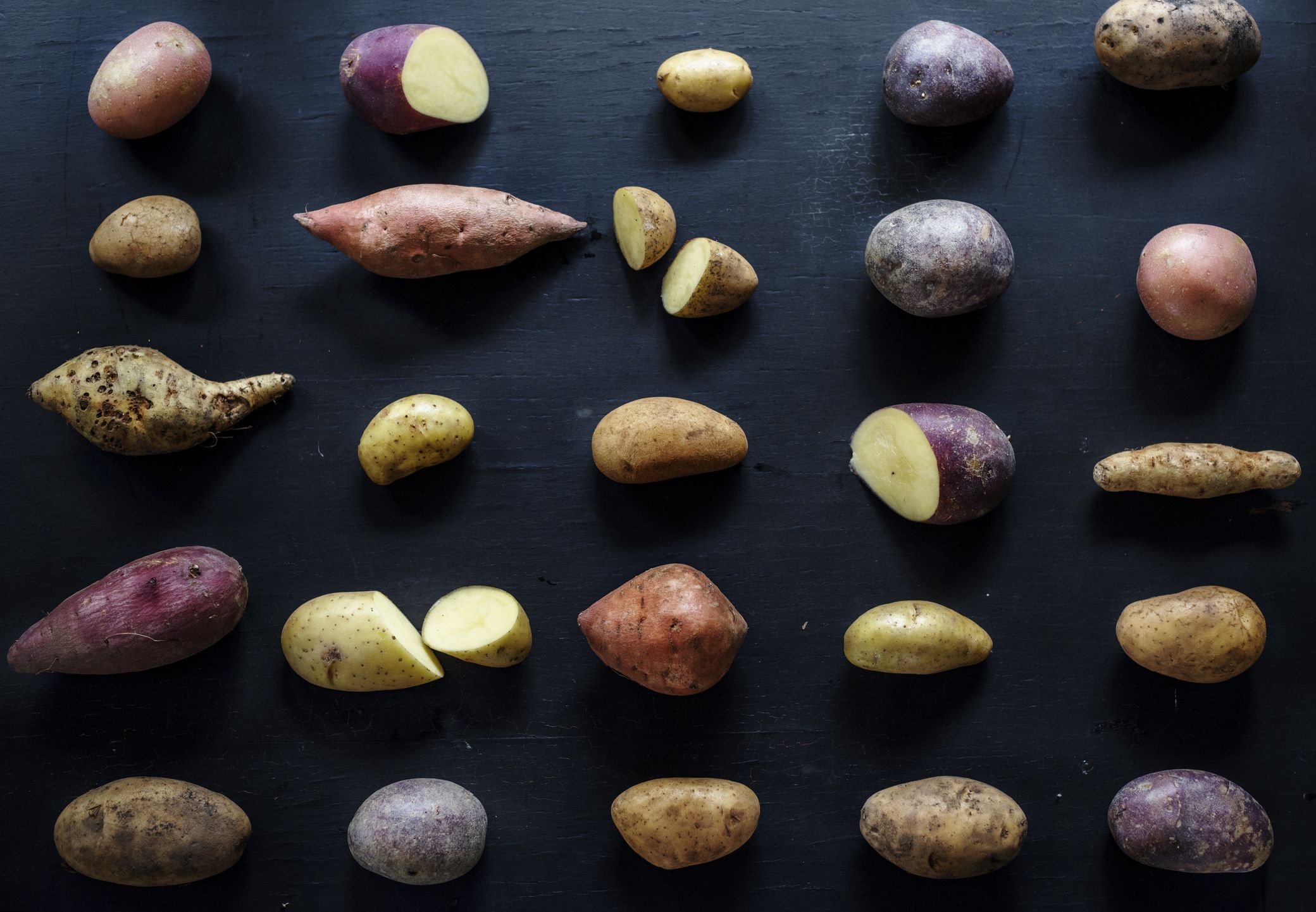 “Ube is the Tagalog [Filipino dialect] word for tuber that comes for the Dioscorea alata L. plant. The tuber is bright lavender in color,” Richelle Rada, RD, LD, a nutrition coach, says. “In my culture, it is commonlymade into a jam called ube halaya, then added to foods like Halo-Halo [a shaved ice dessert].”

Though ube is originally native to the Philippines, it’s recently become an international sensation for its unique color and sweet, starchy flavor.

So ube is healthy, right?

Nutritionally, ube is pretty similar to other sweet potatoes. “It is a complex carbohydrate, so it will have beneficial fiber. Most Americans need more FIBER!” says Rada. Plus, it is rich in B vitamins, thiamine, and niacin.

Here’s what you get in one serving (3.5 ounces) of cooked ube, per the USDA Nutrient Database:

In addition to that, you also score 12 milligrams of vitamin C (that’s 16 percent of the RDA for women), plus small amounts of calcium, iron, and vitamin A.

“One of the main differences between sweet potatoes and ube are the type of antioxidants associated with their color,” says Cabrero. While the orange hue of sweet potatoes signals a rich carotenoid content, the purple hue of ube indicates lots of anthocyanins.

Anthocyanins, which are also responsible for the deep red and purple hues in berries, have been shown to help the body fight inflammation.

Ultimately, “both ube’s antioxidant profile and fiber content make it a great addition to an anti-inflammatory diet,” Cabrero says.

Ube isn’t quite as over-the-top sweet as your regular old sweet potato. (It also doesn’t have as moist and soft a texture when cooked.) Rada thinks it’s a nice cross between a sweet potato and taro root, with a texture more similar to taro.

According to McKercher, ube has a more of a mellow, nutty, vanilla-like flavor. Others, meanwhile, have described is as creamy and almost coconut-like.

Wait, are ube and taro the same thing?

You wouldn’t be the only one to confuse the two. Though ube and taro can look somewhat similar on the outside, they’re definitely not the same thing. 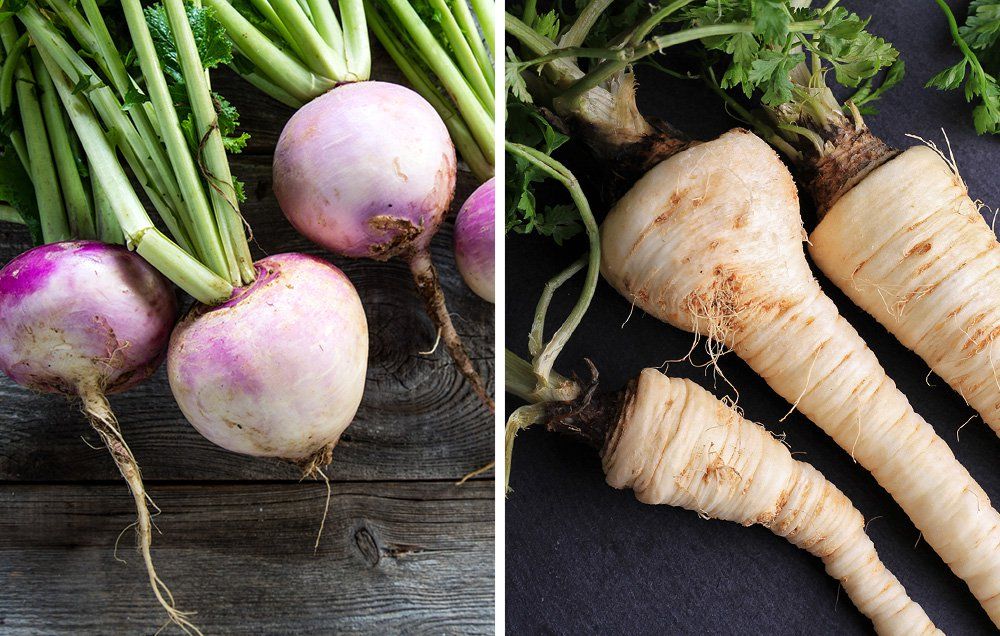 While taro can take on a light purple hue, it’s typically mostly white or beige in color, says McKercher. Plus, because it has a more neutral taste, taro is more commonly used in savory dishes. Ube, with its sweet and nutty flavor, meanwhile, is more suited for desserts.

Here’s how to try ube for yourself.

Unlike sweet potatoes, you may have to hunt a little bit to find ube at the store. Your best bet for finding whole ube (and ube products, like frozen ube, ube powder, or extract) is to check out an Asian grocery store.

“In a Filipino grocery store, you may find it close to a purple sweet potato or Kamote. But there is a difference here. The Kamote would have a smooth skin and the ube would have a tough exterior.” Rada suggests.

Once you’ve got your hands on some ube, its sweet flavor and creamy texture make it a natural choice for treats like baked goods. (It’s often used in Filipino desserts, including muffins, cakes, cheesecakes, cookies, ice cream, and bubble tea.) I’m in love with this veggie already!

Cabrero recommends adding pureed ube to pancake or waffle batters and quick bread recipes. It also works well in pretty much any recipe that calls for pumpkin puree. (Baby food, too!)

Ube isn’t only good for satisfying your sweet tooth, though. Of course, you can also bake, roast, and mash them, just like you would regular potatoes or sweet potatoes. (Check out this Mashed Purple Yams With Sesame Brown Butter recipe from The Endless Meal.)

Want to keep it super simple? Cabrero suggests roasting ube with avocado oil and pumpkin seeds or making ube fries in the air-fryer.

“I would suggest peeling the skin if using the ube to add into foods.It must be steamed or boiled before eating. Contact with water will help give that beautiful deep rich purple hue!” Rada says. 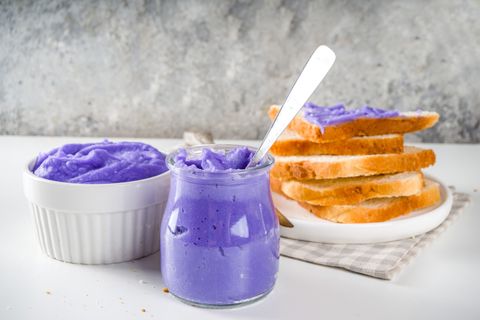 She also provided an ube halaya recipe, which is the Filipino “jam” used to create a variety of desserts.

2. Mash ube with a potato masher or fork.

4. Cook on low, stirring until all ingredients dissolve, and turns into a jam-like consistency.

And if you have special dietary needs or preferences, according to Rada, you can use evaporated milk or any plant-based milk like soy milk instead of the milk, ghee instead of butter, and, if you want the natural sugar of the ube to shine through, you can omit the sugar.

The bottom line: Ube (a.k.a. purple sweet potato) is a versatile, flavorful, and healthy root veggie you can eat on its own or add to all sorts of baked goods.