Italian film director Paolo Sorrentino says his new film, The Hand of God, has been sitting in his mental almanac, waiting to be made, since he started directing. If it is not quite the story of his life, it is certainly a story of his life.

“For those who do my job, it’s like postponing going the dentist,” he says. “You think, ‘I don’t feel like doing it; I’m scared.’ But sooner or later, you must. I have always hidden personal stuff in all the movies I have ever done. When I turned 50 last year, I gave a useless meaning to that fact and decided to face, for the first time, my personal story.” 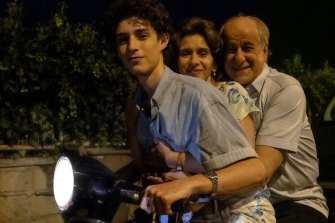 The Hand of God is a deeply personal film for Italian film director Paolo Sorrentino.Credit:

Sorrentino grew up in Naples. He invests his story in a boy called Fabietto (newcomer Filippo Scotti), whose father Saverio (played by Sorrentino’s regular collaborator Tony Servillo) is an eccentric communist who works in a bank, who is besotted with his pneumatically voluptuous aunt, hangs out with the local cigarette smuggler and is suddenly convinced, when his handsome brother Marchino (Marlon Joubert) goes with most of the rest of Naples to audition for Federico Fellini, that he wants to be a film director.

Most of it is true, at least according to Sorrentino’s memory, though he says his sister denies having spent most of her adolescence in the bathroom – a running joke in The Hand of God. “There are some true persons, some invented,” he shrugs. “What is true is the feeling about that moment of my life and that city.”

The hand of the film’s title belongs, of course, to star Argentinian football player Diego Maradona, who came to play for Napoli in 1984 to universal popular rejoicing. Sorrentino did not meet him but Maradona – or, more particularly, the Napoli match fixtures – unwittingly saved his life. Young Sorrentino was supposed to be away for the weekend with his parents but decided to stay in Naples to see Maradona play. There was a terrible accident in the holiday house. If he had been there, he would almost certainly have died.

It is a remarkable story of the fates at work, festooned with family anecdotes and lashings of the ribald excess one might expect from the director of The Great Beauty, The Young Pope and Loro, Sorrentino’s voyeuristic take on the many lusts of Silvio Berlusconi. Even so, this memoir is restrained by Sorrentino’s standards. For instance, he usually relishes a lush and extravagant film score. In The Hand of God, despite the fact young Fabietto is constantly listening to his Walkman – listening, Scotti reveals, to Talking Heads and The Cure – but we don’t hear anything.

”It was my first idea about the movie, that I will do a movie without music,” he says. “Usually I use the music to increase the emotions in a movie. This time I had too many emotions about it. Maybe that is the reason.” It’s true, he agrees, that songs evoke a period more effectively than anything else but he didn’t want to over egg the nostalgia either.

“Because it’s not a movie about the ’80s. It’s a movie about family life at the beginning and then the painful life of a boy with a dream to make cinema. So, I avoided anything that usually highlights our memory of the period – strange hair, pink jackets. Otherwise, the audience is too focused on, ‘Oh yes, do you remember when?’ and it’s better they focus on the characters.”

Diego Maradona died a year ago. “It was not easy when he passed away, as my big dream was to show this movie to him,” says Sorrentino. “For me, it was very important for many reasons, not only because, as I say in the movie, I believe he saved my life but also because in my family, there was not books, not movies, so my first relationship with art was Maradona. Maradona was someone who was able to transcend reality and become something else – and that something else was art for me. So, my first contact with another world was Maradona.“

But perhaps the most important spectator for this film is Paolo Sorrentino himself. He says he saw the making of the film as therapy. His greatest fear, he adds, is that it will not have worked. “I am afraid that this movie will not change anything about me. Now I am over 50, I still have the same problems I had when I was 15 – mostly my temperament, that I am not stable, that I am prone to rage and that I am always that same person. I hope this movie helps me to change. In the other movies I did, I was obsessed by something and once I did the movie, I completely forgot that obsession. I know they were different movies but I will see if the trick works just the same.”

The Hand of God streams on Netflix from December 15

TV, movies, Find out the next TV, streaming series and movies to add to your must-sees. Get The Watchlist delivered every Thursday.