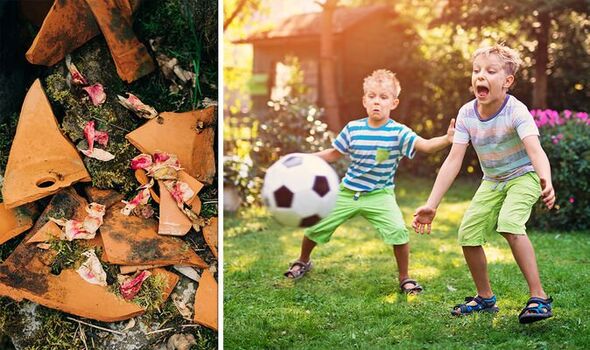 Sharing her experience on the parents’ blog Mumsnet, the woman, who wished to remain anonymous, explained: “We thought we had good relationships with our neighbours, but our garden (plants/shrubs) are being damaged by footballs which are coming over the fence.”

The woman continued: “We used to throw them back, but it became a constant expectation, we asked the parents to speak to their kids and pointed out the damage to plants, as well as the impact on our dog (a nervous rescue).

“They are now entering our garden whilst we aren’t at home and taking the balls back.

“I am furious and upset. It feels like a huge breach of trust…”

The problem seems to be a constant issue in homes with gardens across the country as other parents shared similar experiences on the forum.

Another mum explained: “Last year I returned eight footballs that had come over the fence in a matter of days and that was just one of many similar occasions. Never apologised or thanks.

“Neighbours now have a basketball hoop just the other side of the fence by the house with constant bouncing noise and just took back two balls that could have damaged pots and plants on my terrace.

“I asked that they make sure nothing else comes over in case of damage and was shouted at ‘Children have a right to play in their own garden’.

“I agreed and said we need to work together but the neighbour is still angry and told me the children are now not allowed to play football in the garden in respect for me. Why do I feel I’m the problem?”

Other forum users shared their thoughts with one saying: “How often are they coming over? If it’s multiple times a day I’d consider starting to keep the balls until they get the message that what goes over never comes back.

“If only once a week or so personally I’d let it go.”

Another one commented: “Have you told them you don’t want them entering your garden without permission?

“I know you shouldn’t have to say that but maybe being explicit that you won’t want them in your garden would help with the boundary.”

One user suggested she should “smear the balls with dog shit”.

“Bet they aren’t so keen after that,” they said.

Another one said: “Throw their balls into another garden.”

“I would put up higher fencing so they can’t climb over?” one mum advised.

Another mum shared her own experience: “We had a similar issue with our neighbours next door when their kids were younger.

“We were out at work all day but would throw them back when we got home. They started coming over to get the balls when we weren’t there which really pissed me off. I asked the neighbour not to let them and she flat out denied they were doing it but it did at least stop.

“It started again when we worked from home more and I’m pretty sure it was deliberate as they knew we were in the garden office.

“One day, they didn’t know I was in there and climbed into the garden so I went out and told them off. It did completely stop after that.”