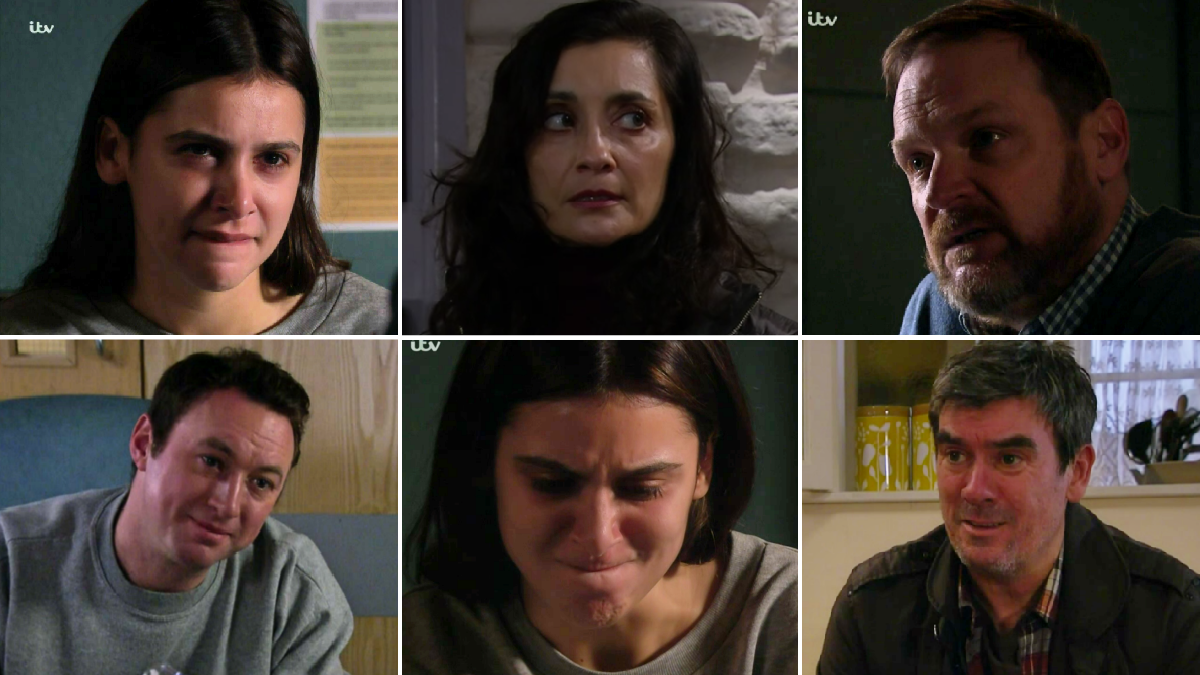 Emmerdale’s big Meena Jutla return week concluded with one of its best outings, though one that arguably left us with more questions than it did answers!

With Meena having finally been taken into police custody, Friday’s (February 18) edition of the ITV soap dealt with the aftermath of her reign of terror, as DS Rogers (Matthew Flynn) questioned her about her actions.

The killer was clever as per usual, refusing to admit to anything, before twisting the narrative in every way imaginable, leaving Rogers incredibly frustrated.

Liam Cavanagh (Jonny McPherson), meanwhile, vowed to get revenge in whatever fashion he has to if the police fail to find enough evidence to charge Meena with her crimes.

As noted above, the episode didn’t offer much in the way of closure, but rather it expertly set the scene for the future, posing multiple questions that have left us desperate for answers.

It’s been quite a week, one we’re not going to forget anytime soon, but before we move on, let’s reflect on Friday’s instalment of the serial drama, as Metro.co.uk point out all the things that we noticed about this one.

Care to join us?

Will Meena pay for her crimes?

Meena’s reaction to being taken into police custody on Thursday was everything we could’ve hoped for, as it appeared as though the sadistic murderer’s luck had finally run out.

Surely that means her fate is sealed? You’d think so, but yet again, Meena managed to turn the tables, twisting the narrative to suit her, as she claimed Ben attacked her, which forced her to kill him!

With little to no evidence linking her to the other crimes, and a plea of manslaughter for Ben’s demise – not to mention incredible acting skills – the killer could manage to evade justice once more!

Liam was livid when DS Rogers informed him that without evidence, they cannot charge Meena for the murders of Leanna, Andrea Tate or Nadine Butler.

Rogers assured Liam that he would do everything in his power to ensure Meena was put behind bars, but Liam wasn’t happy with that, informing the detective that if he fails to do his job, then he himself will have to get revenge in another way.

Is Liam implying that he will kill Meena?

The doc almost claimed her life earlier this week when he pushed her from a bridge, but she ultimately pulled through.

Will he take action once more and ensure that the job is finished this time?

As we’ve already mentioned, without any hard evidence tying her to the murders of Andrea, Leanna or Nadine, it’s possible that Meena will walk free.

The murderer teased DS Rogers on several occasions with such a fact, telling him that he could search for an eternity and still come up empty handed.

Such evidence, however, does actually exist. The killer’s trophy box – which contains keepsakes from Andrea, Leanna, Nadine and Ben – is buried in the allotment.

The question is: will it be found?

Will Liv and Vinny tell their family about their engagement?

Liv Flaherty and Vinny Dingle decided to keep their engagement a secret from their nearest and dearest, claiming that they would wade in and take over if they knew about it.

Vinny, meanwhile, suggested that he and Liv elope, rather than bothering with the fuss of a wedding. Liv agreed, and thus the duo started to set things in motion.

But will they reconsider excluding their families from their union? Next week will see the couple head off to Daventry to tie the knot in secret, but the guilt will soon set in.

Will Vinny tell Mandy? Will Liv tell Chas? We’ll just have to wait and see!

Will Cain stop his feud with Al?

The war between Cain Dingle and Al Chapman has waged on for many months now, and there have been huge consequences as a result.

But despite this, Emmerdale’s resident hard-man has been unable to resist causing trouble where his nemesis is concerned, and vice versa for Al.

Kyle Winchester, however, was hurt in the process this time, and Cain seemed to finally realise the damage that his actions can have on his closest family.

A heart-to-heart with Chas earlier this week made him see that he needs to stop letting Al wind him up, and he subsequently set out to make things right with his son.

Friday’s offering of the show saw him do just that, as he and Kyle dressed up as superheroes in what can only be described as an instantly iconic scene.

But with he and Kyle back on the same page, will he at last leave his feud with Al in this past?