A Place in the Sun: Laura encourages couple to make offer

Laura Hamilton was in charge of today’s property search and she was in Paphos, Cyprus with Diane and Gary who were searching for a holiday home where they could enjoy the all year round sunshine. The couple were looking for a wheelchair friendly apartment for Diane’s son Harry, with a pool all for under £130,000. But Laura was pleased to know they had  a possible £10,000 of “wiggle room” should she come up trumps with the perfect property. And she did just that, but was surprised when the couple named the price they were wiling to pay for it.

Apartment number one was located in the universal district of Lower Paphos; it was close to the beach and all the many bars shops and restaurants which made up the lively town.

It was on the ground floor with a courtyard as well as access to a communal pool.

The inside had recently been renovated and had an open plan living dining and kitchen area, two good sized bedrooms and a family bathroom all for £148,181.

While it was above their budget, Laura explained how the developer said they would accept an offer of around £134,000 to £136,000, as well as converting the front steps into a ramp and making the communal pool accessible for Harry to enjoy.

“We didn’t expect it to be as modern and nice,” Diane told Laura when she asked them why they were so speechless. 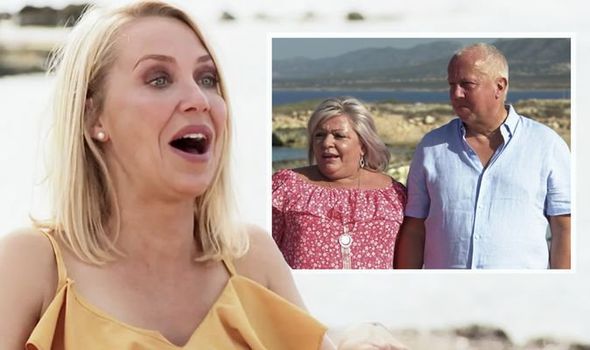 While they said the property was “lovely”, the “outlooks from inside” were not “particularly nice”, to add to that, the family would have to exit the apartment and “come around the side to the pool” which also lacked space for sun beds.

Laura was “disappointed to not be kicking off with a contender” but moved onto property number two.

Those watching at home saw the presenter take the potential buyers to the very popular Kato Paphos district – a short hop from the harbour and all the very inviting tavernas that line the seafront.

The apartment had a covered terrace at the front as well as a courtyard garden on one side, both of which led out to the communal pool area.

Inside there was an open plan living dining and kitchen area, two good sized bedrooms and a family bathroom all for £117,727.

Heading through the front door, Diane said: “It’s a little small – compact. The kitchen is a beautiful size but not necessary. We could have it smaller with more living space.”

“How much time do you really want to be inside?” Laura asked and she said: “We do want to be outside more than in, but we want a nice space [inside too].”

As for the bedrooms, they were of a good size, but Diane was concerned by the hallway as it was “quite narrow” and she wondered how Harry would use his wheelchair.

But after looking around a little more, the couple were converted once they had taken a nosey around the outside.

It had a large terrace out front as well as a smaller outside area at the back, and for £131,818 they also got a car port.

Inside was a light and bright living, kitchen and dining area, a bedroom that opened up onto the terrace and a second next to a family bathroom.

“I like the layout, i works really well,” Diane commented but Gary didn’t like the kitchen cupboards.

“You can change that!” Laura remarked. “The other thing is there is no island or breakfast bar, so you can make the kitchen as big or small as you like?”

As for what the fourth property offered, the location of Peyia meant both sea and mountain views were visible from the apartment.

“It’s not a bad size, but it does need modernising,” Diane said. “The kitchen’s big enough but I don’t know whether I like this, it feels closed in.”

When they joined Laura outside, they told her they were “disappointed” with the viewing.

“Oh? No way!” The presenter exclaimed and the couple explained: “It just wasn’t very us inside, it was compact and overfilled which doesn’t help.”

It was in the market for £101,818 which meant plenty of money left over for renovations.

The final apartment Laura showed the couple was a two-bed bungalow in Kate Paphos.

It has a small courtyard at the front as well as a huge terrace at the back which overlooked the communal pool.

Inside was a light-filled living and dining room with an adjoining kitchen, plus two large bedrooms and a shower room.

“The agent is willing to accept £140,000,” she told Diane and Gary and when they sat down at the end of the property search, she was surprised to hear what the couple wanted to do.

Diane said: “Number five is our favourite,” which prompted Laura to ask: “So are you going to put in an offer?”

“No,” she replied stunning the presenter. “Right,” Laura said.

“Why not try your luck?” Laura suggested and she rang the agent.

“Really?” Laura asked. “I’m surprised, I thought you would bite their arm off at that offer.”

The seller accepted an offer of 126,000 for the property.

A Place in the Sun airs weekdays at 4pm on Channel 4.