Andrew Neil has been an ever-present figure on GB News ever since the channel launched earlier this month to provide an all-new take on the latest headlines. However, as he closed his self-titled programme on Thursday evening, Andrew announced he’d be stepping down from presenting the 8pm slot for a while, with Colin Brazier poised to step in.

Upon closing his show, Andrew said: “That’s it for tonight and from me for the next few weeks.

“But I leave you in the safe and professional hands of Colin Brazier.”

However, Andrew assured fans his break wouldn’t be too long: “I’ll be back before the summer is out and when you least expect it so stay tuned.”

Before handing over to Tonight with Dan Wootton, Andrew also had a lengthy and heartfelt speech for GB News’ audience. 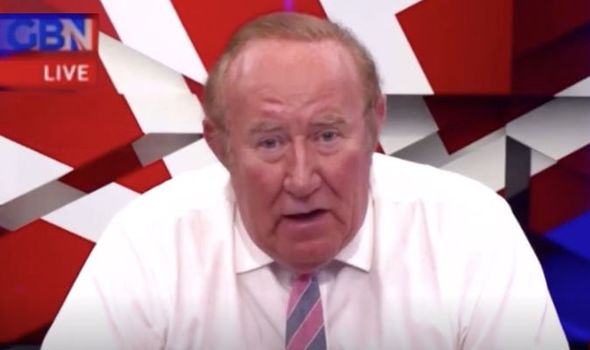 “But before I take this break, let me say this,” he continued. “Yes, we had a bit of a rocky start with the launch of GB News.

“We’re a start-up, they’re always a bit rocky these start-ups. But we are up and running as you can see, we get better every day and there’s clearly an appetite for what we’re doing.

“And in two short weeks, we’ve already built a loyal audience which has beaten all of our expectations, it’s often bigger than the other news channels and it’s growing.

“That’s the real story about GB News to date and you won’t often read that in the papers.

“So on behalf of GB News, I say to all of our viewers, thank you. We won’t let you down and you ain’t seen nothing yet.”

Needless to say, fans had mixed reactions to hearing of Andrew’s – albeit temporary – departure from the network.

After an impassioned speech in which he announced his break and thanked loyal viewers for the warm reception GB News has received, many took to Twitter with their thoughts.

“@afneil @GBNEWS thank you Andrew for providing us with a great news channel,” one fan tweeted in response.

A second added: “Brilliant show @afneil Enjoy your break.Thank you for giving us @GBNEWS.”

While a third simply penned in response to the news: “Will miss Andrew.”

And a fourth added to the discussion: “Andrew is really good, but looking forward to @colinbrazierGBN taking over for a few days.”