Lupin season 2 release date: Has a second season been confirmed?

If you knew nothing about the premise of “Alien on Stage,” it would be easy to think you were watching the latest Christopher Guest comedy. This documentary that plays like a mockumentary tells the improbable tale of a shaggy crew of UK bus drivers who take an amateur stage production of Ridley Scott’s “Alien” to London’s West End — and it’s every bit as hilarious as that sounds. Revealing amazing feats of technical ingenuity, actors who’d rather be at the pub than learn their lines, and a former military director who hates the spotlight, “Alien on Stage” captures lighting in a bottle. Like a real-life “Waiting for Guffman” with a fairytale ending, it’s one of the funniest documentaries in years.

Taking its title from the play at its heart, “Alien on Stage” follows a group of Dorset bus drivers as they prepare to mount their annual holiday production for charity. They call their company Paranoid Dramatics, and it’s a family affair. Reluctant director Dave casts his wife Lydia as Ripley in the adaptation penned by aspiring screenwriter Luc — their son and a huge “Alien” fan. (Grandpa Ray built the sets.) Drinking pals and partners, Carolyn and John play Lambert and Brett, while fellow bus drivers Jason, Mike, and Jacqui fill out the rest of the Nostromo crew.

As the Corky St. Clair of “Alien on Stage,” Dave tries desperately the keep the ship afloat while his cast is more interested in smoke breaks and sightseeing. Overseeing props and special effects is Pete, a night shift supervisor who surprises with incredible designs. Emanating the focused dedication of Weta Workshop head Richard Taylor in the “Lord of the Rings” special features, Pete takes us through his intricate process with characteristic British modesty. Using piping, foam core, and wires, he develops a fully articulated Xenomorph tail, flying alien spawn, and recreates the famous chest-bursting scene with uncanny accuracy. Courtesy of the filmmakers

“Every alternative I come up with, I hope Ridley Scott would’ve wanted,” Pete says humbly.

After their first performance in Dorset sells only 20 tickets, the company is understandably down. (“Alien” being less of a holiday crowdpleaser than the previous year’s Robin Hood pantomime.) But when a small group of fans from London discover the show, filmmakers Lucy Harvey and Danielle Kummer enter the picture. Through crowdfunding and word of mouth, “Alien on Stage” develops enough of a cult following to book one night only at the Leicester Square Theatre — a comedy and music venue in London’s West End. Their Guffman had arrived.

With the stakes raised, “Alien on Stage” kicks into another gear, aided by strategically placed music cues taken from the original movie. Through problems accessing the rehearsal space, transferring the sound cues, and memorizing lines, Dave is often found sneaking off for smoke breaks and joking about needing the bathroom. Giddy and nervous, the bus ride to London includes plenty of pointing, shrieking, and of course, drinking. As he heads out with Carolyn the night before the show, John quips: “Do we ever have an early night when we’re on holiday?”

On the day of the show, y’all, the company only has six hours to load in their sets and cue up lights and sound. It’s a mad dash to curtain as Dave and his tech crew work with professionals for the first time, clearly feeling way out of their depth. As the house fills up (the show is completely sold out) and the lights go down, the film’s brilliant third act kicks into gear. 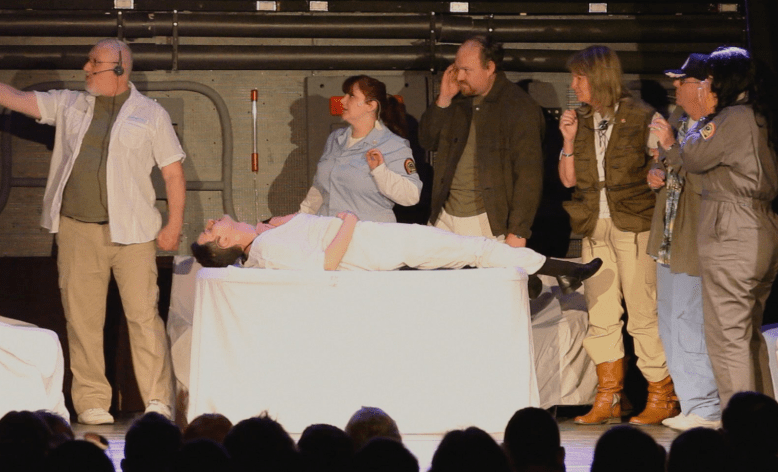 Courtesy of the filmmakers

It’s not hard to see why “Alien on Stage” was a smash-hit play. The middle-aged non-actors deliver their lines with a mix of deadpan and earnestness that cannot be faked. Jason, who doesn’t much care for acting, emerges as a natural scene-stealer with his casual delivery of “I’m willing to take that chance.” Responding to the huge laugh, he ad-libs like a pro: “Yes, yes, get on with it.”

The filmmakers made the brilliant call to put a camera inside the Xenomorph costume, using the grainy POV footage at climactic moments. The film ends with a flourish, cutting the actual performance with the flurry of backstage activity and raucous audience response. The crowd’s energy is so infectious, you feel like you’re in the theater. By the triumphant curtain call, as young Scott trots onstage for a very professional bow in full Xenomorph garb, it’s clear “Alien on Stage” has completely captured the hearts of the audience — film, theater, and Christopher Guest lovers alike.

“Alien on Stage” premiered at the 2021 SXSW Film Festival. It is currently seeking U.S. distribution.