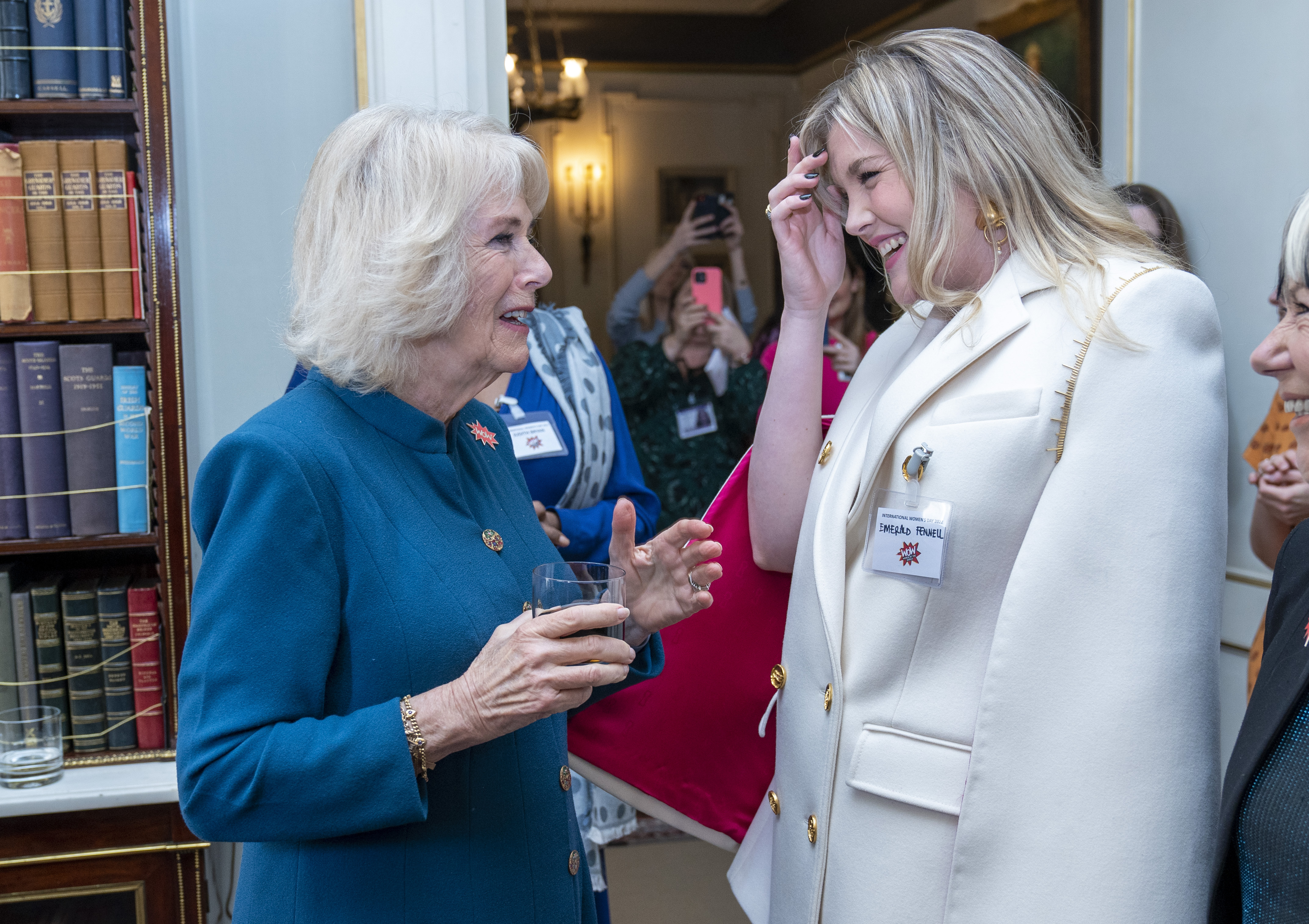 The Duchess of Cornwall came face to face with her onscreen younger self on Tuesday when she met the actress who played her in the acclaimed TV series The Crown, and the pictures suggest it was a jovial conversation.

Camilla welcomed Emerald Fennell and other leading women from the arts, politics and business to her Clarence House home as she celebrated International Women’s Day.

The 36-year-old actress, director and writer played the part of Camilla during the third and fourth seasons of the Netflix series, earning an Emmy nomination for her performance.

Much has been written about whether the royal family are happy, or not, about their portrayals in The Crown but the duchess seemed pleased to see her TV double.

Fennell said about their encounter: ‘It was absolutely delightful. She is such an impressive person, it was fittingly nice to meet her today on International Women’s Day because she does so much for so many particularly female-centred charities.’

Acknowledging the personal nature of her past role, she added: ‘I was nervous I might be thrown in the tower but so far so good.’

The Promising Young Woman Oscar-winner was full of praise for the duchess too.

‘She’s been in the spotlight for a long time and has always weathered it with a lot of grace and good humour.’

The pair were seen – and photographed – chatting together for a few minutes, but when asked about the conversation Fennell shared that she would be keeping its contents to herself.

‘You know what – I’m going to be very discreet, because if I’ve learnt anything it’s “loose lips sink ships,”’ she told reporters.

Meanwhile, actress Joanna Lumley has revealed that she has stopped watching the show, which is currently shooting its fifth season, out of ‘loyalty’ to the Royal Family.

Having watched earlier episodes to learn about the Queen’s younger life, the Absolutely Fabulous star then switched off as explained: ‘I know that’s not how they speak or what they said or did.’

She added to The Mirror: ‘So I decided not to watch it anymore because I have some loyalty, as one would to anybody they know and like and are lucky enough to be friendly with.’

At the Clarence House gathering Inna Prystailo, wife of Ukraine’s ambassador to the UK, Vadym Prystaiko, who last week was comforted by the duchess, gave a moving speech about the plight of women in her homeland as the Russian invasion continues.

Struggling to hold back tears, she said: ‘Today there are no smiles and no peace, just horror and sorrow in the eyes of every Ukrainian woman, mother and wife.’

She added: ‘Now we have to count the death toll of our people and watch their frightened, crying children who are forced to flee their native land with their mothers and sisters, leaving their fathers to defend our country.’

Camilla, president of the Women of the World Festival being staged this weekend, said ‘vast strides’ still need to be taken towards greater equality and told her guests: ‘We will need more than 135 years to close the gender gap worldwide.’

The Crown is available to stream on Netflix.