Emily Watson is terrific at telegraphing how a mother’s love grinds against her moral code in this atmospheric seaside drama. 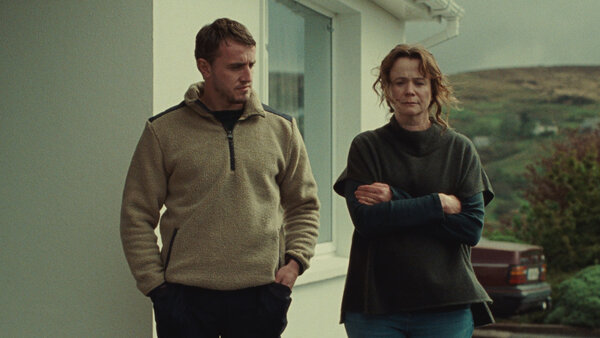 “God’s Creatures,” a sparing, atmospheric drama, opens underwater. We see a burst of bubbles and hear a muffled bellow. Then the image cuts to the ocean surface, where gentle wavelets belie the turbulence below.

The same might be said of the insular Irish fishing village where the movie takes place. Though the story begins with a drowning, the parochial residents of the region retain high spirits, whether carousing at the townie bar, harvesting oysters for sale or relishing the angelic warbling of Sarah (Aisling Franciosi), a local songstress. Yet a baleful score and slow, forbidding shots of the landscape suggest that evil lurks nearby.

The film centers on Aileen (Emily Watson), an affectionate mother and factory worker — she toils on an assembly line alongside Sarah — whose prodigal son, Brian (Paul Mescal), moves home unexpectedly after many years abroad. Aileen is delighted about the return of her golden child, until a devastating crime leaves her unsure of whether she really knows him at all.

The directors, Saela Davis and Anna Rose Holmer (“The Fits”), are skilled engineers of apprehension. As news of the offense spreads through the town, a chasm opens between Aileen and Sarah, and the filmmakers shepherd us down its center with a series of sinister sounds and images. Every maritime mundanity — the clack-clack-clack of oysters dropping into a bucket, say — pulses with pain or menace.

“God’s Creatures” is ultimately a movie about the collision between a mother’s fidelity and her moral conscience, and Watson is terrific at telegraphing how these instincts grind against each other to terrifying ends. Even in a simple story line that sometimes wants for psychological clarity, the power she wields is undeniable.

God’s Creatures
Rated R. It has the mouth of a sailor. Running time: 1 hour 34 minutes. In theaters and available to rent or buy on Apple TV, Google Play and other streaming platforms and pay TV operators.