Harry Styles is amongst the hundreds of acts taking the stage at Coachella this weekend – but made things extra-special as he was joined by Shania Twain in an incredible duet on Friday.

The singer – who rose to fame in One Direction – is just weeks away from the release of his new album Harry’s House, which comes out on May 20.

He put out his latest single As It Was at the beginning of this month, which quickly shot up to No. 1.

On Friday, he teased a further taste of what’s to come, as he headlined the famous American music festival.

But he truly gave fans a night to remember by finishing night one-off with a legendary guest performance from the one-and-only Shania.

The pair sang Twain’s iconic hit single Man, I Feel Like A Woman and also fangirled over each other amid songs – which we love. 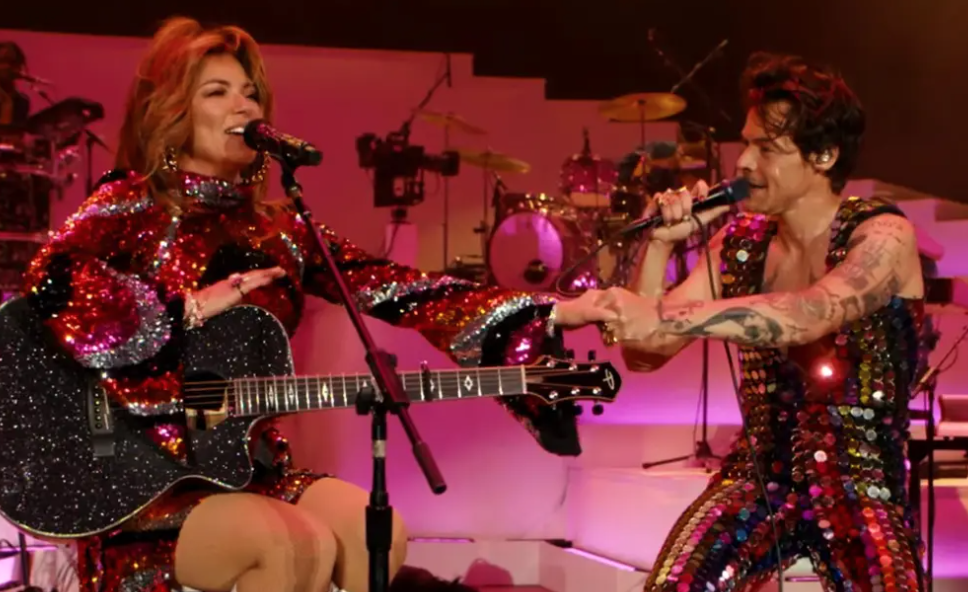 ‘This lady taught me to sing,’ he told the Coachella crowd. ‘She also taught me that men are trash.’

Those in the crowd laughed at Harry’s comments before Shania revealed just how excited she was to be sharing a stage with Harry.

‘I’m just lost for words,’ she told the fellow hitmaker. ‘I feel starstruck.’

They both donned bedazzled outfits, with Harry looking incredible in a mirrored jumpsuit while also showcasing his array of tattoos.

Shania also got the glitter memo, as she wore a glam sequinned dress that perfectly complemented her sparkling guitar.

Those watching the performance from the comfort of their homes were loving the scenes.

One shared on Twitter: ‘Wow a moment in pop culture,’ with another dubbing it ‘the best performance ever.’

‘Harry Styles and Shania Twain singing man I feel like a woman is something I did not know I needed why am I crying,’ someone else wrote.

‘When I say I screamed. I SCREAMED,’ added a fan.

Elsewhere in the set, he sang his old group’s famous hit, What Makes You Beautiful.

He finished off his show by belting out his poignant hit Sign Of The Times,  and signed off with his signature quote: ‘Treat people with kindness.’

Justin Bieber and Snoop Dogg were amongst others to take to the stage on Friday, joining forces with Daniel Caesar and Anitta respectively.

The Swedish/Canadian supergroup was announced to be replacing Kanye West, who was removed from the line-up just days before the festival began.