Holly Willoughby has admitted she felt like a competition winner during Queen Elizabeth’s Platinum Jubilee Pageant.

The This Morning host was spotted alongside former co-star Rylan Clark and other famous faces during Sunday’s festivities as celebrations continued to mark the Queen’s 70 years on the throne.

Holly had a chance to soak up the atmosphere in the middle of the carnival, which started at Whitehall before processing up The Mall and finishing outside Buckingham Palace around Queen Victoria Memorial.

‘The bus was amazing. You couldn’t believe what you were seeing – just so many people, so much love and affection. It was just magical,’ Holly told co-host Phillip Schofield.

‘Every corner, every bend there was people there, then the Royal Family being there, and Ed Sheeran performing on stage!’

Holly was in a great spot when Her Majesty stepped out onto the balcony at the palace and smiled and waved alongside her three heirs, Prince Charles, Prince William and Prince George, while the Duchess of Cambridge, Princess Charlotte, Prince Louis and Camilla, Duchess of Cornwall also stood alongside her. 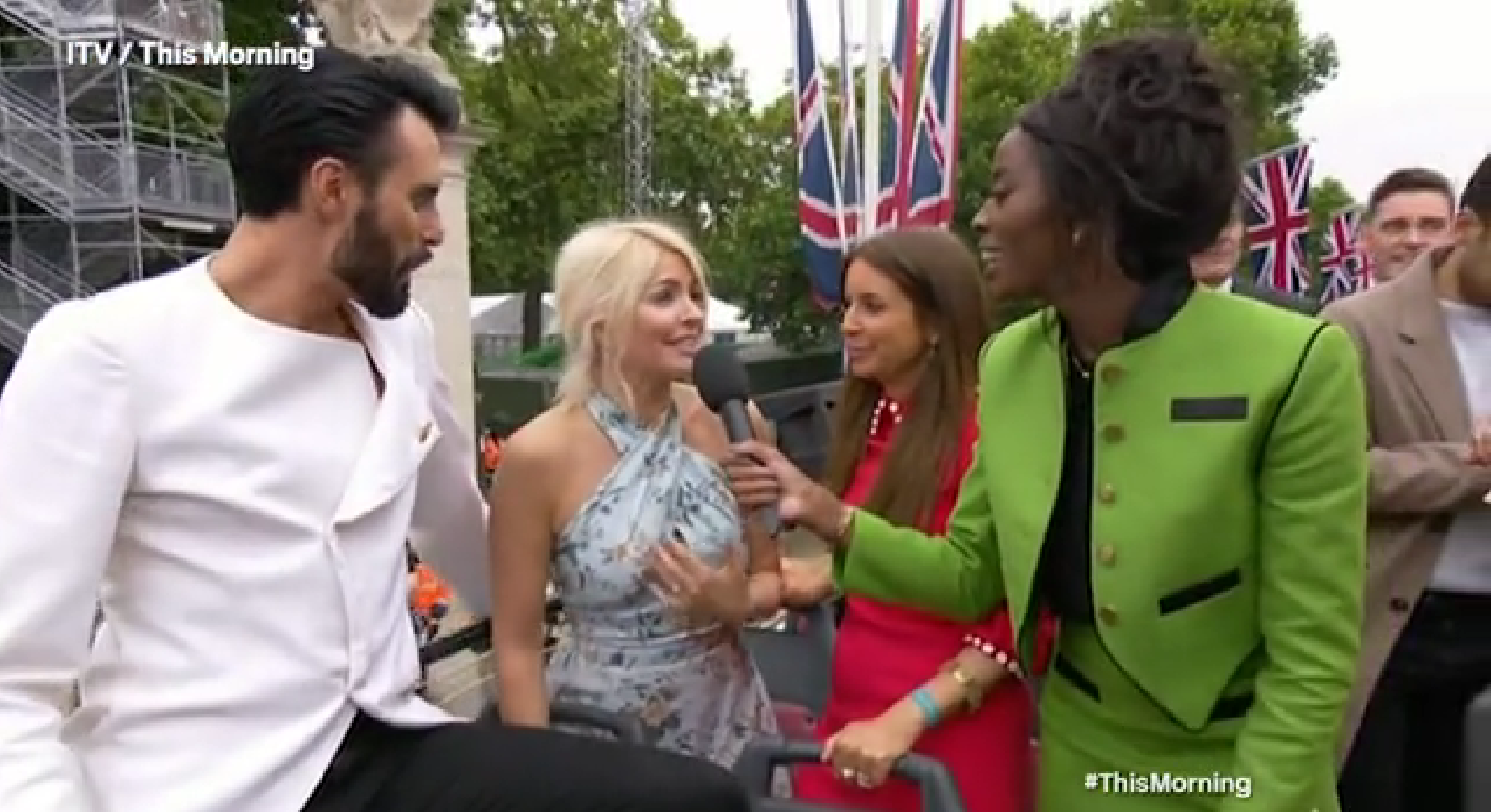 Holly gushed: ‘Obviously you don’t know, you hope maybe you might get to see something.

‘And then, suddenly you heard this roar and we just turned around and there was the family on the balcony and it was – you just felt like you were seeing a piece of history. Amazing. I still can’t quite believe it! I felt like a competition winner.’

Holly and Phil opened Monday’s episode of This Morning by recreating the Queen’s brilliant comedy skit with Paddington Bear, and they brought out their own marmalade sandwiches in a nod to the sketch.

In a heartfelt statement after the Bank Holiday weekend, the Queen joked ‘there is no guidebook to follow’ after marking seven decades on the throne.

She continued: ‘But I have been humbled and deeply touched that so many people have taken to the streets to celebrate my Platinum Jubilee.

‘While I may not have attended every event in person, my heart has been with you all; and I remain committed to serving you to the best of my ability supported by my family.

‘I have been inspired by the kindness, joy and kinship that has been so evident in recent days, and I hope this renewed sense of togetherness will be felt for many years to come.

‘I thank you most sincerely for your good wishes and for the part you have all played in these happy celebrations. Elizabeth R.’

Dust off your Union Jack bunting, Queen Elizabeth II’s Platinum Jubilee is well and truly upon us.

Taking place from Thursday, June 2, to Sunday, June 5, the celebrations mark Her Majesty’s record-breaking 70th year on the throne.

Across the UK, there will be street parties, concerts, and other special events attended by the Queen and senior members of the Royal Family.

Visit Metro.co.uk’s Platinum Jubilee page for all the latest updates.