When I heard that D.A.R.E., a group responsible for educating kids and teens about drug use, called Euphoria‘s depiction of addiction a “glorification,” I initially thought it was a joke. Clearly the powers-that-be over there are watching a different show than I am, because here’s my take: Euphoria, unlike almost every other depiction of drug use I’ve seen in pop culture, is doing the necessary work to shift the view of addiction. It’s making addicts and the people who love them feel less alone, and it’s illuminating the dark reality of addiction for people who might be struggling to understand. The show’s not just entertainment—I’d argue it has the power to change people’s lives.

I abused party drugs as a teen, heroin in my twenties, and have gone through six stints in rehab. I relate to Euphoria’s protagonist Rue–dead dad to hopeless junkie–because this was my storyline for years. It wasn’t until Euphoria, though, that I saw what I’d personally gone through portrayed authentically on-screen.

As a child of the ’90s, Jessie Spano’s pill problem on Saved by the Bell comes to mind as the first depiction of drug use I remember seeing on television. Overwhelmed with studying for the geometry midterm and preparing for a performance at The Max, Jessie turns to caffeine pills. Although Jessie’s angst is palpable in a scene where she hurries to grab her pills and then breaks into song and later sobs, the scene plays as overwrought and corny. The message was D.A.R.E.-levels of clear: Say no to caffeine pills!

Like Saved by the Bell‘s Jessie pill-popping stint, other beloved teen dramas of the aughts like Degrassi made addiction into a side-show plot point. The Degrassi franchise has been compared to Euphoria and was undoubtedly ahead of its time in its portrayal of topics like drug use, rape, and abortion, but still, its execution when it came to addiction fell short. When Eli uses MDMA in a relatively light-hearted scene, there’s no grinding teeth. There are no dilated pupils, sweating, exaggerated sense of touch, or blurred vision–the tell-tale physicalities that come with MDMA. There’s also no internal processing from Eli in his altered state. Experiencing the interior highs and lows of drug use along with a character is fundamental to understanding the full-range of the addict’s plight, and Degrassi was surface level at best.

Even in recent years, on-screen drug use and addiction hasn’t captured any sense of realism the way Euphoria does. In The Queen’s Gambit (a miniseries I adore despite this critique), chess savant Beth Harmon struggles with substance abuse but does so seemingly to propel her genius. She’s a relatively high-functioning addict whose rock-bottom sequence involves dancing drunk in her panties with a Pabst Blue Ribbon and lit cigarette–many an addict’s high point. With a show so heavily focused on the protagonist’s addiction, there was a missed opportunity to give her struggle more depth.

Euphoria has brought addiction to the forefront of a teen drama, and it’s done so in a three-dimensional way that rings true, unlike its predecessors. Rue’s character is a bereft struggling addict. She’s not a basketball player who turns to speed to win the big game (One Tree Hill) or a Stanford hopeful desperate for an edge to get her through midterms (the aforementioned Saved by the Bell)–she’s a traumatized teen girl who uses drugs to self-medicate. Her character doesn’t have big aspirations, she isn’t a prep-school student who partied too hard (Gossip Girl). She’s a grieving, lost young woman, torn between surrendering to self-destruction and struggling to find meaning in her life after the death of a parent. While this seemingly simple foundation for a character is troublesome to some, it rings true to the stagnancy in which young addicts often find themselves and the ambivalence they feel when assessing their realities.

Rue confides in Ali during one scene in a diner, “You can say that sobriety is my greatest weapon, but to tell you the truth, drugs are probably the only reason I haven’t killed myself.” I’d be lying if I said I hadn’t thought exactly that in the darkest days of my addiction. And I’m not alone. In rehab group after rehab group, I heard teens and young adults confess the same through tears, surrounded by counselors and family members begging them to love themselves.

I didn’t have huge aspirations or goals to work toward, because when I tried to look ahead to my future, it felt like a black hole. It’s hard to aspire to something when your current purpose boils down to “feel better.” Rue embodies the hopelessness I’d recognized in myself and the many young addicts I’ve known. She also embodies all the desperation and cunning that addiction inspires in the souls who suffer it. “You don’t fucking recognize me, well neither do fucking I!” Rue yells at her mom in her breakdown scene. Addiction is like a virus that feeds off its host–it wants to thrive at your expense. Euphoria demonstrates this internal struggle better than any portrayal of addiction I’ve seen on television.

We see Rue flip-flop between caring that she’s hurting her family, friends, and love interest Jules, to not caring who she hurts because her obligation to feed her addiction is paramount. We see her deeply remorseful as she sobs to her family, apologizes to Ali for lashing out, and endures excruciating withdrawal symptoms in an attempt to get clean; and we see her running from the police, attacking her loved ones, throwing Cassie to the wolves to save herself, concocting wild drug dealing schemes, and holding out her arm for a shot of morphine. It’s that ambivalence that characterizes addiction so well, and that nuance is so often missing from on-screen portrayals. Euphoria doesn’t force feed us hope because that’s not the point–it accurately portrays the hopelessness addicts and their families endure everyday. 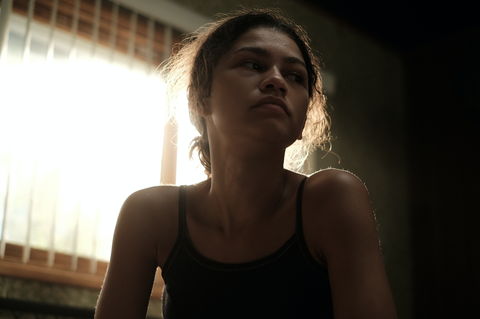 In the third episode of season two, Rue breaks the fourth wall and says it best herself: “Now, as a beloved character that a lot of people are rooting for, I feel a certain responsibility to make good decisions, but I relapsed. In all fairness, I did say in the beginning I had no intentions of staying clean. But I get it, our country’s dark and fucked up. And people, they just wanna find hope, somewhere, anywhere, and if not in reality, then on television. Unfortunately, I’m not it.”

With accurate depictions like this, viewers may be able to heighten their own compassion for and understanding of the raw humanity at the base of people like Rue. Rue isn’t your hero, and her character has the self-awareness to recognize that. But she isn’t your villain either. She’s human. She’s just Rue. And if we can reconcile that in our heads as viewers, then maybe we can reconcile it with the people around us, too.