Of the many illuminating scenes in Liesl Tommy’s directorial debut, the biographical drama Respect, a unique moment happens when Aretha Franklin, played meticulously by Jennifer Hudson, sits at her piano late at night in her New York apartment, contemplating what will ultimately become her biggest song. She’s surrounded by her two sisters in their pajamas and headscarves, as she pieces together her civil rights and feminist anthem, “Respect” (an Otis Redding cover), over the piano keys. Her older sister, Erma (Saycon Sengbloh), chants, “Ree Ree,” Aretha’s nickname, which finds its way into the monster hit. Younger sister Carolyn (Hailey Kilgore) chimes in, enthusiastic to support the musical magic her iconic sister is conjuring. At this moment, Aretha is 25, stuck in a miserable marriage and hungry for an identity. But as she composes her masterpiece, she starts to define her musicianship, adjust the chords of her career, unleash herself from the grips of the domineering men in her corner, and step into her Aretha-ness. 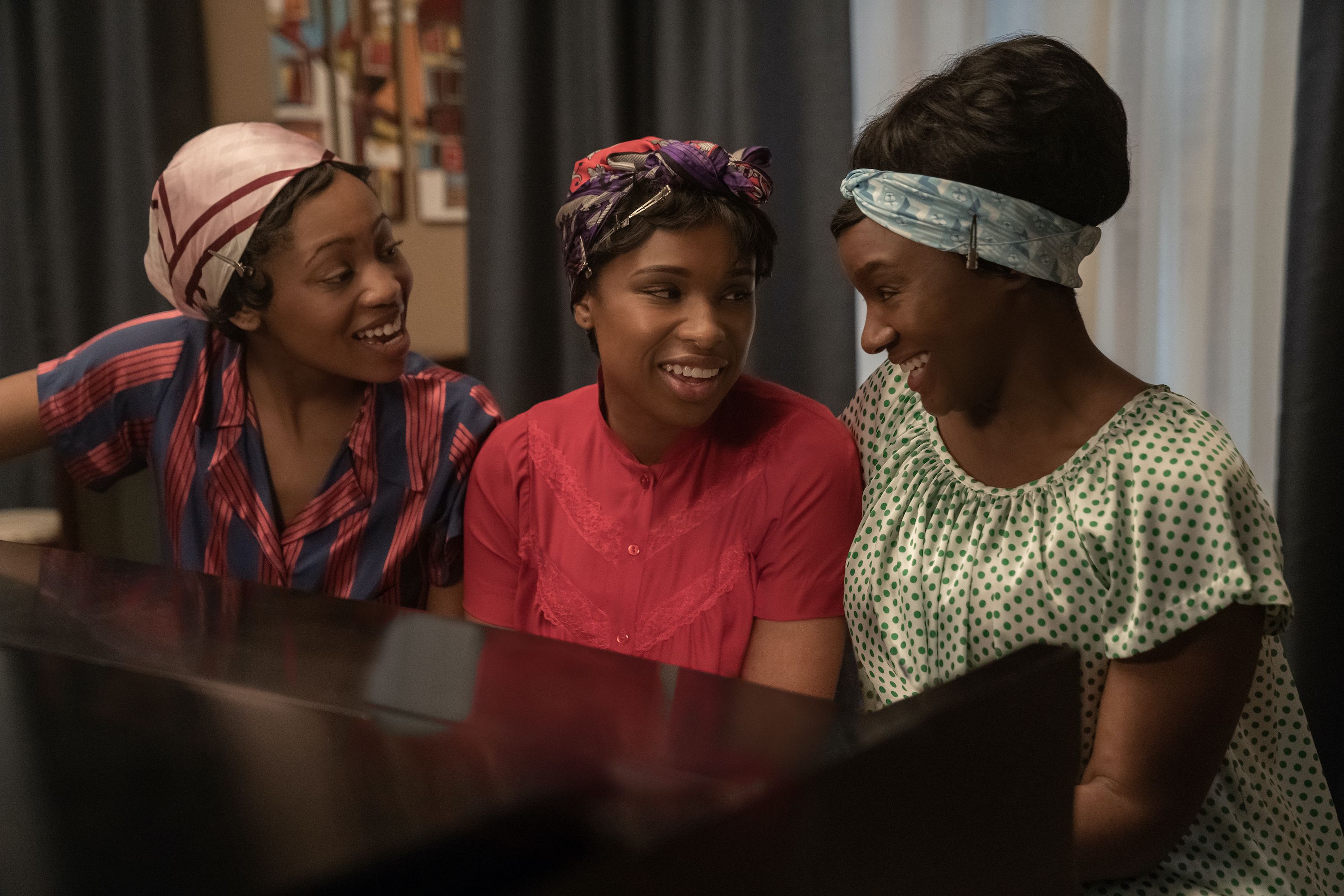 In theaters Friday (August 13), Respect chronicles two decades of the late Queen of Soul’s epic yet frenetic life, tracing her journey from a 10-year-old gospel prodigy to a 30-year-old globally acclaimed singer. Behind the glamour of the sequined dresses she wore and the world stages she performed on lays the grit of the emotional manipulation, physical and sexual abuse, lack of artistic agency, and hollow emotional voids Aretha was desperately trying to fill. Losing her mother, Barbara Franklin, at a young age was the genesis of further trauma that followed Aretha in the years ahead. She self-medicated with alcohol and by diving headfirst into destructive relationships. Respect brilliantly peels back the layers of her glitzy career to show how Aretha fought her demons head-on. Her inner resilience, tenacity, and spirituality made her realize her worth and power. Men didn’t need to have a say in her career anymore; she could steer it on her own. 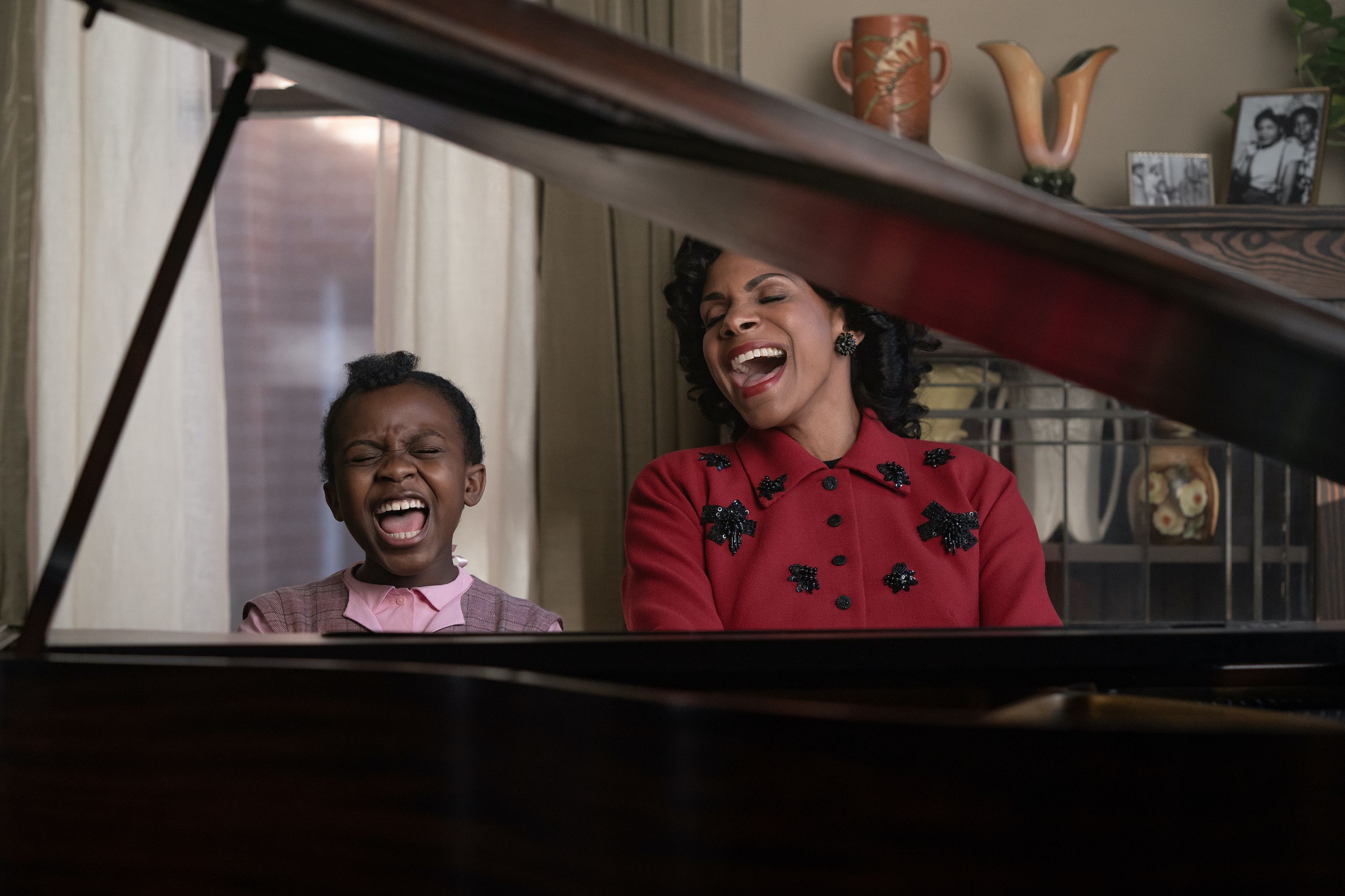 The film opens with a view into what Black wealth looked like in 1952. Celebrity preacher C. L. Franklin, played superbly by Forest Whitaker, is raising Aretha and her three siblings in a stately home in Detroit. Aretha is a gifted child who sings for the greats like Ella Fitzgerald and Duke Ellington right from her very own living room. C. L. is obsessed with respectability and power despite harboring his own dark secrets, and the Franklins are a portrait of Black upper middle-class success in a Jim Crow America. Aretha’s father has a suffocating hold over her and is intent on molding her into a “Black Judy Garland.” He viciously slaps her when she shows up an hour late to a Columbia Records album session, and it’s not until she starts working with Atlantic Records producer Jerry Wexler (Marc Maron)—and their fruitful chemistry based on trust and freedom—that she starts to thrive. Her manager and first husband, Ted White, played by the multitalented Marlon Wayans, put in genuine work to transform Aretha into a superstar, but his envy and physical violence toward her ruins everything. As Aretha’s fame grows, the film reveals how the men in her life attempt to control and manipulate her career, only for Aretha to ultimately discover her agency and evolve into the boss songstress we remember her to be. 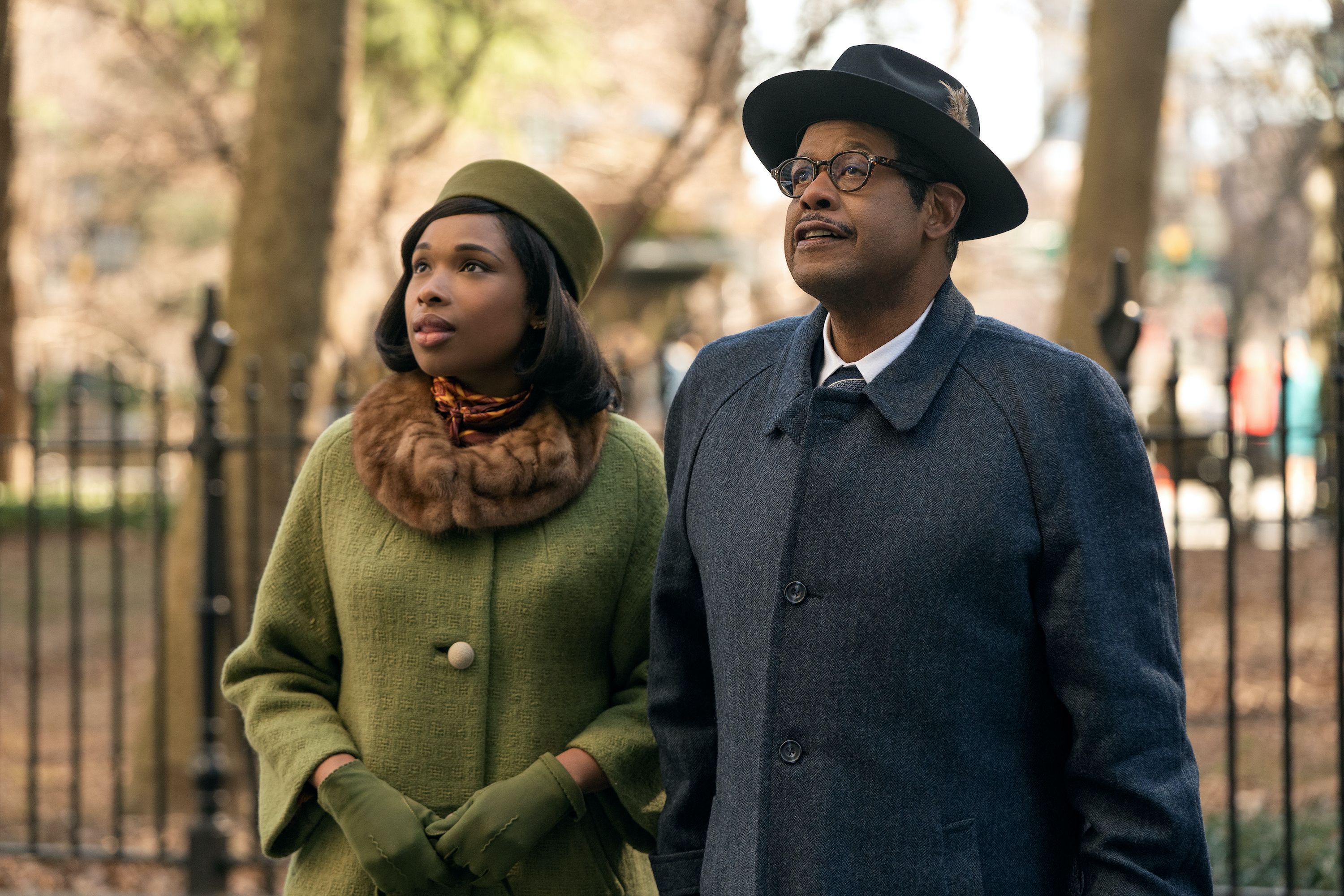 Respect is a labor of love anchored by Black women, seen through our lens, and wonderfully evident in the care shown onscreen. Directed by Tommy (Eclipsed), the film was penned by playwright and screenwriter Tracey Scott Wilson (Fosse/Verdon), who as a PK (preacher’s kid) herself brings insight to the complex feelings Aretha must have felt, yearning to be worldly but still walking close to God. Tommy’s and Wilson’s lived experiences as Black women help show the cruel realities Aretha had to fight over and over again: the constant underestimating, the microaggressions, and the more blatant forms of emotional and physical disrespect she endured.

Tommy’s directing and Wilson’s script weave together what Aretha meant to Black women. A Black woman taking up space in both white-dominated and Black male-dominated spaces. At a nightclub one night, Aretha watches Lena Horne perform and gushes over how badly she wants to emulate her. Aretha didn’t resemble Horne or Dorothy Dandridge, but as a beautiful, brown-skinned, curvy woman who was slowly finding her feminist voice, she became a giant figure for everyday Black women in this country. Tommy herself makes a small cameo in Respect, as a fan who approaches Aretha in a hotel lobby, and reveals the power Aretha has in crystallizing Black women’s struggles. Aretha even inspires her father’s longtime girlfriend, Clara Ward (Heather Headley), to stop tolerating C. L.’s constant verbal abuse. On the other hand, Aretha’s sisters Erma and Carolyn are the glue that holds her together. Carolyn wrote Aretha’s hit “Ain’t No Way,” both sisters sung backup for years, and in the film, they’re always present, even in uglier moments, like when Aretha walks through the front door with a black eye from Ted. Black women lovingly reciprocated to Aretha in the same way Aretha gave back to them. 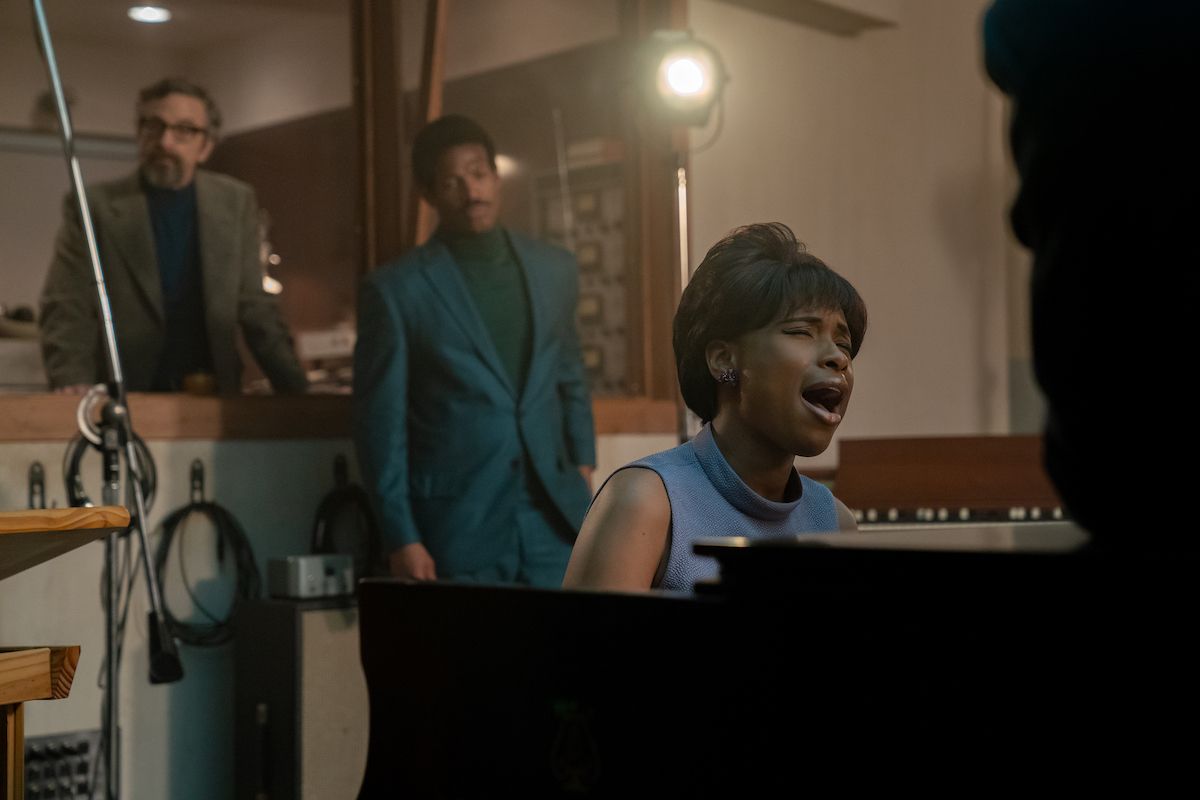 Hudson, who offers an electrifying portrayal of Aretha Franklin, is no stranger to extravagant musical projects. Her voice stuns in the films Sing and Cats, and in Broadway’s The Color Purple. As the embattled Effie White in Dreamgirls, she made history as the youngest Black actor to ever win an Oscar. While preparing to play her idol in Respect, Hudson and Franklin spoke weekly. Born nearly 40 years apart, Franklin and Hudson, 39, mirror each other so closely. Both hail from the Midwest (Franklin a Detroiter, Hudson a Chicagoan), were raised singing in the Black church, and have faced unspeakable family loss and trauma. Franklin chose Hudson to portray her, because they are kindred spirits, who’ve poured agony and healing into their music. Hudson dived fully into Franklin. She spent six months taking movement lessons with a choreographer and took piano lessons to immerse herself in Franklin’s artistry. She consulted with the legendary Patti LaBelle to understand how Black women took up space in the music industry in the ’60s and ’70s (and the ways they weren’t allowed to).

On camera, Hudson’s face beams in her cute flipped hairstyle and pretty cat-eyelined eyes. It homes in on Hudson’s nuanced expressions and powerhouse live vocals during lavish stage performances. She wears a bevy of smart tweed suits, sumptuous sparkly gowns, fabulous furs, in true Aretha fashion. Costume designer Clint Ramos created close to 85 exquisite looks, like the sea-green ostrich collar outfit she wears when Martin Luther King Jr. commemorates Aretha Franklin Day in her hometown. And the pearl-white embroidered dress she wears when she performs “Think” in Paris, directing her eyes to Ted, because they’re through. Mary J. Blige plays Aretha’s mentor, Dinah Washington, and glows in a gold beaded strapless gown and white mink stole while delivering tough love to Aretha about her stagnant career. By the ’70s, we see a more radical Aretha emerge, her fashion sense aligning with her revolutionary politics; her support transitions to the Black Panthers, the Black Power movement, and advocating for Angela Davis. She embraces short Afros, statement gold jewelry, and flashy leopard caftans. 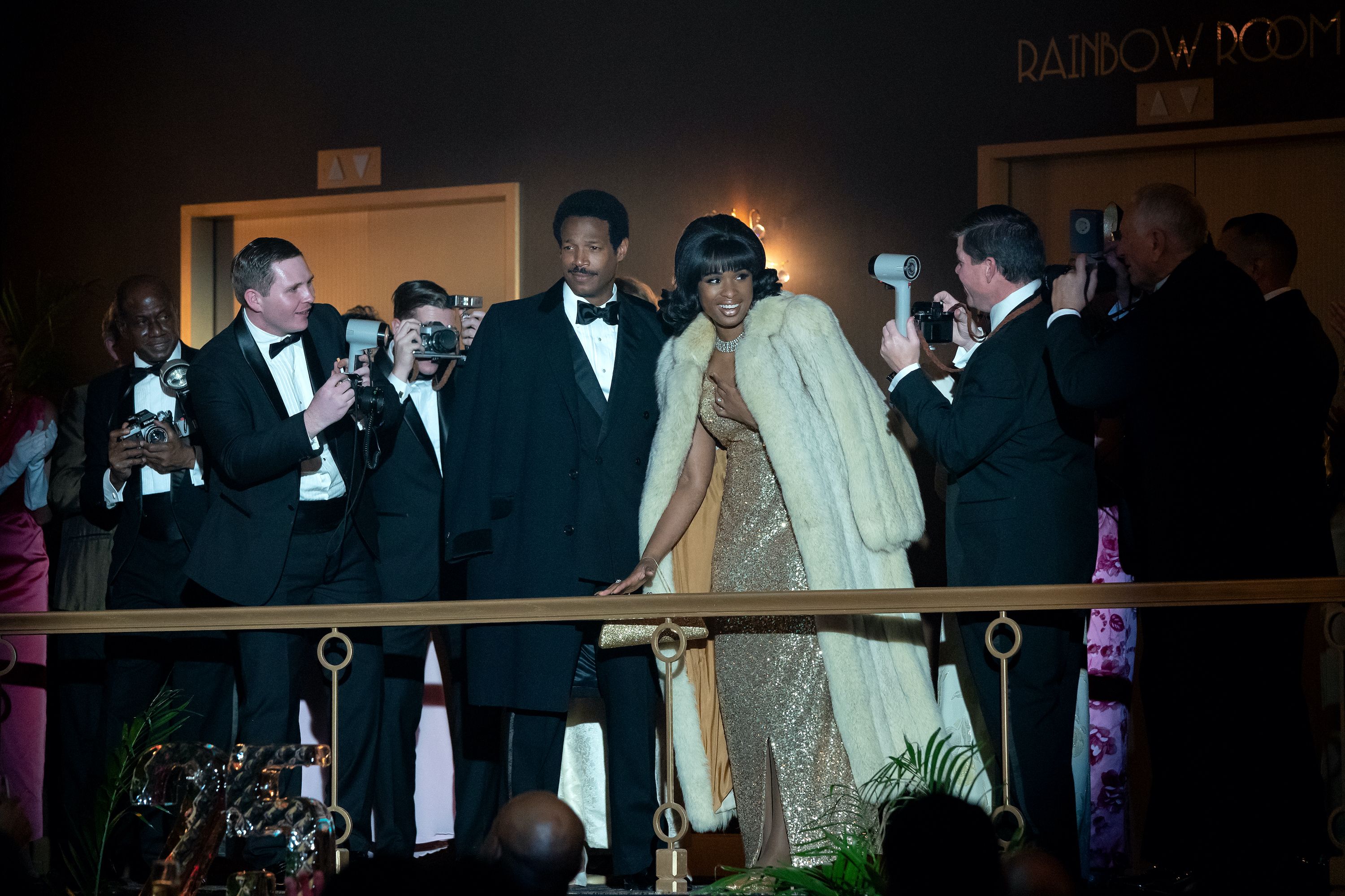 Tommy’s lens is grand and sweeping, but it understands intimacy and despair. Respect shows sweet moments between a younger Aretha, portrayed by Skye Dakota Turner (also a young Tina Turner in the Tina musical), and her mother, Barbara, played by Broadway legend Audra McDonald, at the piano exchanging songs and tenderness. C. L. and Barbara had a turbulent marriage, rife with his chronic infidelities and physical abuse, including raping and impregnating a 12-year-old girl from his church. Barbara moved to Buffalo, New York, and later died when Aretha was about 10. The film doesn’t shy away from the sexual abuse and rape Aretha experienced as a child, and her giving birth to two sons by the age of 15. There’s an unsettling moment when a young man, a family friend, slips away from a party C. L. is throwing downstairs and enters her bedroom with a lascivious smile on his face. Aretha copes with accumulated trauma through heavy drinking, which C. L. calls “the demon.” It’s a convenient narrative her father and siblings like to use when Aretha hits rock bottom, repeatedly.

But ultimately, she finds her way back, back to her true home, the Black church. Respect concludes in 1972 during Aretha’s “Amazing Grace” period, as she records her enormously successful live gospel album, which she coproduced, and was filmed into a documentary. Hudson ascends the pulpit in a green paisley ensemble, dripping in gold medallions, nerves and fear overpowering her. Her voice breaks into sobs as she performs the famous hymn. The Rev. James Cleveland, her longtime friend and confidante, played by Tituss Burgess, gently mentions, “You’re in church right now, you’re safe.” The church isn’t always a safe and truthful space, but Aretha’s voice was the constant gift that protected her. Respect shows us how time and time again, the world’s greatest soul singer fell on her resilience, her strong faith, and ferocious inner courage to stand up in life.