In this sequel to “The Binge,” on a night of copious drinking and drugs, two friends reflect on their lives. 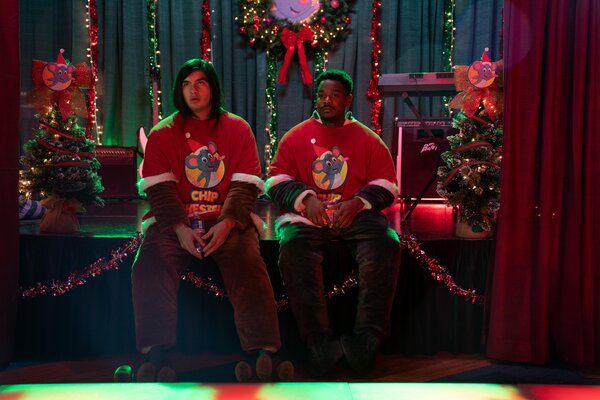 In “It’s a Wonderful Binge,” a sequel to “The Binge,” the writer-director Jordan VanDina brings back the ne’er-do-well best friends Hags (Dexter Darden) and Andrew (Eduardo Franco) for a night of debauchery and mayhem.

This time, Christmas Eve is the newly appointed, single day of the year when alcohol and drugs are not illegal. But now, Hags and Andrew are confronting mature hurdles: Hags intends to propose to his longtime girlfriend Sarah (Zainne Saleh), but is sidetracked when the engagement ring, her family heirloom, is lost. Conversely, Andrew feels so unwanted by his dysfunctional and temperamental family that he decides to end his life, George Bailey style, until an unlikely Angel (a hilarious Danny Trejo) tries to show Andrew the value of his life.

In the background to the high jinks are Kimmi (Marta Piekarz) and Sarah working to hide Kimmi’s escaped convict uncle and recover the town’s Christmas owl.

VanDina’s comedy lampoons a bevy of holiday movies, ranging from “It’s a Wonderful Life” to “The Christmas Chronicles,” for raunchy laughs. Sometimes these biting tributes can detract from the zaniness of the binge concept — we don’t get nearly enough substance-fueled havoc — causing the film to veer closer to retreaded ideas rather than new spins. Even so, the stirring pratfalls and well-placed dirty jokes make “It’s a Wonderful Binge” a keenly subversive Christmas movie.