James Martin was in the This Morning kitchen cooking mackerel and tuna with a Panzanella salad. The chef revealed why he was cooking such dish, and said he wanted to show Holly Willoughby how to make a proper salad following her poor attempt a few weeks ago. Those watching at home saw him joke with the presenter about the state of the side dish, but Holly retaliated and told James to “shut his face”.

Kicking off the show, Holly and Phillip Schofield introduced what was coming up, from fashion with Gok Wan, to a phone-in with Deidre Sanders.

They then crossed to James in the kitchen who explained what he was making: “We’re going to do Panzanella, a nice little salad to celebrate the amazing salad you made a couple of weeks ago-”

“Not celebrate-” Holly interjected and corrected.

“To move it forward!” James said. 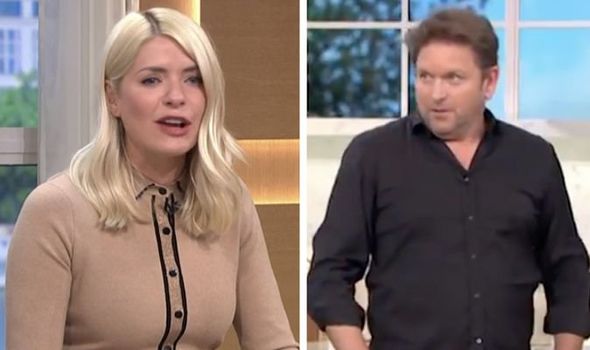 Holly added: “To move it forward! Well that’s a nice way of saying it, you were shocked and appalled by my salad that I had made for my husband.

“I was actually sending you a picture of the crab, the recipe that you’d made for us, and he was tucking into it.

“And in the background, I didn’t realise it was going to become the main focus,” she commented as the image was seen on screen.

“It [the salad] was the main focus – it was a perfect side order,” James remarked. 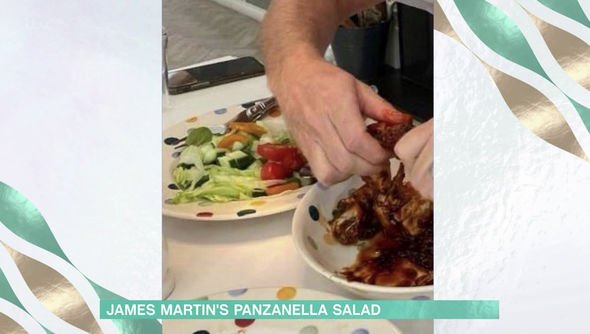 Later on in the show, Holly and Phil tucked into their own portions of the Panzanella salad, while James showed those at home how to make it.

“It tastes amazing!” Holly exclaimed after voicing her initial doubts.

“Panzenella is a simply little dressing using onion and garlic which you blitz up and we add tomatoes, obviously in season at the moment,” James revealed. 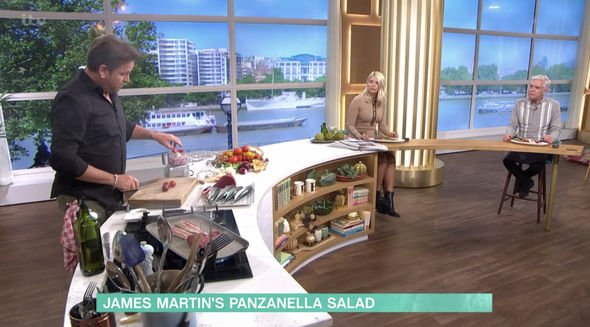 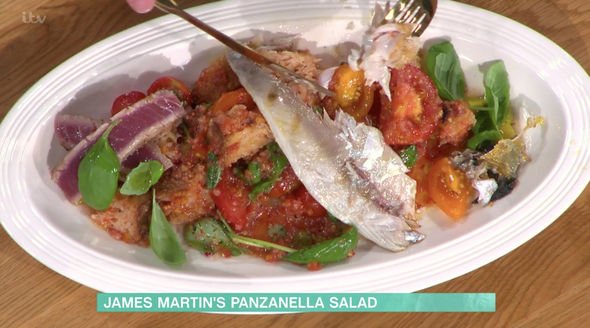 “The dressing for this, add it to a bowl, but what I’ve done with yours, I’ve taken some bread, but you need to let it dry a bit so it’s crunchy.”

“This is so delicious,” Phillip added.

“This is the basis of this salad, it’ll teach you another variant of a salad, you sent me this amazing picture of this amazing salad you did,” James said.

“You didn’t even mix it together,” James laughed off.

“It’s a salad – kind of!” The presenter excused.

“Not compared to this,” the chef remarked.