Daisy Ridley and Jennifer Hudson’s avatars stood on stage before a captive audience. “I’ve been holed up for a year, so this is like the first party I’ve been to and it’s just great,” said Ridley, as her animated self smiled and looked out at the room. “I’m in awe,” Hudson added.

In reality, they were hidden behind headsets with Ridley located outside London and Hudson in Chicago. In the VR crowd milling about before the conversation began, an attendee snarked, “You’ve got wonder how many of these people are wearing pants right now.”

The event was a celebration of “Baba Yaga,” the latest family-friendly project from Baobab Studios, a five-year-old Silicon Valley company that has produced seven VR experiences to date (including the upcoming “Namoo,” which will premiere in Sundance’s 2021 New Frontier section). Though “Baba Yaga” reached its first audiences as part of the Venice International Film Festival’s VR section last fall, it reaches the Oculus store this week, making it available to the growing market of VR consumers worldwide.

While “Baba Yaga” doesn’t push the potential of VR in any bold new directions, it does illustrate the medium’s formidable effort to create work with broad appeal. The half-hour experience is co-directed by Baobab’s chief creative officer, Eric Darnell, an animation veteran whose credits included “Antz” and the “Madagascar” trilogy before he joined Baobab at its inception.

The story, which features an all-female voice cast, adapts the Eastern European legend of the titular forest witch against the backdrop of two children in a fairytale kingdom who track down the Baba Yaga in a quest to find the fabled witch’s flower that can heal their ailing mother. Ridley voices the young, free-spirited Magda, while Glenn Close plays the bedridden mother, and the viewer takes on the perspective of Magda’s older sister Sacha. Hudson, who served as an executive producer, voices the tree spirits who tease the two children as they venture into the rainforest for their ominous quest.

Propelled by bright, storybook colors and vivid character designs, much of “Baba Yaga” unfolds as a big-budget 360 video, but Darnell, who wrote the piece, included several key moments in which the viewer (as Sacha) must make critical decisions that impact the outcome, lending a crucial choose-your-own-adventure aspect to the experience.

“Baba Yaga” is hardly a video game; only a handful of moments impact the drama, which the studio introduced as a means of getting the viewer to more fully relate to the stakes at hand. “We wanted to make you the main character and let you make different choices that have huge consequences at the end,” said Baobab CEO Maureen Fan, onstage with Darnell and the cast. “For every film project, we choose something that’s really difficult but also more creative.”

The “Baba Yaga” media event was an extension of that ambition. Like a lot of virtual reality developments, the gathering was hailed as history: the first bonafide red carpet premiere, replete with stars, a step-and-repeat, and a giant room filled with tastemakers from the industry making the rounds. To house them all, Baobab built a large, multicolored rainforest that reflects one explored in the piece. Attendees entered a cavernous lobby adjacent to the red carpet before moving into the space for the main event, mirroring a real-life premiere.

The gathering was built on Microsoft-owned social platform Altspace, which also hosted the impressive VR-based Burning Man last summer that found thousands of avatars roaming a virtual desert arena based on Black Rock City. (BRCvr, which created that space, was hired by Baobab to run the event.) The studio spent weeks tinkering with the forest space, even hosting its holiday party there last month. 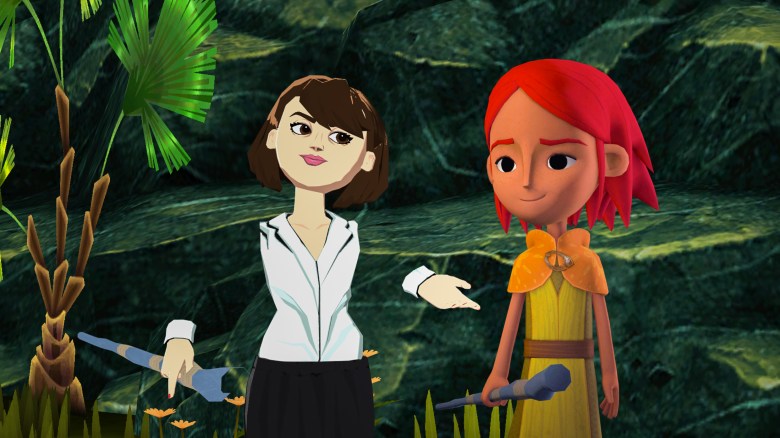 Tribeca Interactive, which co-hosted by the event, also showcased the studio’s inaugural 2015 project, “Invaders.” That piece, a cartoonish short that takes the perspective of a bunny during an alien encounter, helped Baobab gain a foothold in Hollywood after Roth/Kirschenbaum Films acquired the feature film rights. Darnell got involved with the medium after Fan shared a headset with him some time after he’d completed work on DreamWorks Animation’s 2014 “Penguins of Madagascar” and sought new approaches to animated storytelling.

“You can describe it all day long, but you don’t really know what it’s like to put a headset on,” he said. “Once I did, I knew we had to try to find a way to tell a story with this, find characters to fall in love with, and get people to engage in a way where they feel like they really matter.”

That kind of revelation is becoming more common. The VR industry generated approximately $18.8 billion in 2020, and Statista recently reported that VR/AR devices shipped worldwide expected to grow to 68.6 million by 2023. For general consumers, headsets from Oculus to Playstation provide a wide range of entertainment, from gaming to interactive media, while its application to other fields includes everything from medical research to military defense.

VR also provides an opportunity to host mass gatherings that would be otherwise unthinkable anywhere on this pandemic-infected planet. Wandering the world of “Baba Yaga” before the press event kicked off, I ran into Oscar-winning director Glen Keane, whose most recent animated feature credit is Netflix’s “Over the Moon.” Keane, who consulted on “Baba Yaga” and moderated the conversation at the event, hovered over a giant mushroom and took in the scene, wearing an unassuming virtual baseball cap.

Keane first became interested in VR after leaving Disney in 2014 and directing a 360 version of his short film romance “Duet” for Google, which left him excited about the potential of the 3D animation software Tilt Brush. “You can draw in VR, and I think of animation as sculptural anyway,” Keane said. “It makes you realize how much drawing is creating an illusion of movement and how you have to actually draw in space. It was pretty satisfying.”

A few minutes later, Fan took the stage to introduce the crowd. “While COVID has upended our industry, the nature of VR has forced us to innovate a new way to do a premiere,” she said. When it was Ridley’s turn to speak, the actress addressed the whiplash of the past year in which she came out of her “Star Wars” promotional tour and found a world devoid of traditional interactivity. “The longer this has gone on, it has just gotten crueler,” she said. The “Baba Yaga” experience provided an antidote. “It was quite emotional,” she said. “First I went to record, and next was the animation, and it was all these incredible building blocks to where we are now.”

Some things never change: The avatars were led toward a VIP area after the discussion, but I chatted briefly with Hudson at the foot of the stage. “It feels like we’re doing something very special and rare,” she told me, before a virtual publicist whisked her away. 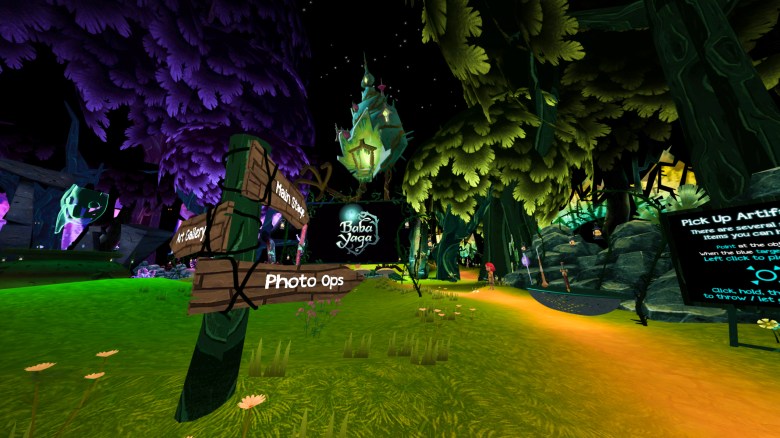 The main area of the “Baba Yaga” premiere event

A few hours later on a pre-scheduled Zoom interview, Hudson chuckled as I reintroduced myself and she realized that my avatar — a short guy with black hair and glasses — checked out. “You look like yourself!” she said. “To see real-life people come through in that way was really cool. Now I’m like, wow, we met in a real way but in another world!”

Hudson first tried out VR during a playdate with her son, when another parent brought a headset. “Some of the kids were like, ‘Play this with us!’ Then I really enjoyed it, fell in love with it, and it turned into an adult playdate.” That led to conversations about how she might support projects in a medium poised to keep evolving as her son grew up. “I like to be a pioneer,” she said, “doing something completely different from what I normally do as a performer, actor and producer.”

Her last acting credit, of course, had plenty of special effects — that would be “Cats” — but Hudson said she had little exposure to CGI side of that production. “I was an actress, so I didn’t deal with the technology,” she said. “With this, I’m being introduced to it. I wanted to learn more about animation, VR, that whole world. I feel like I’m growing into it.” Having skimmed the surface of VR production, she added, “I would love to do more.”

Darnell, for his part, didn’t see his pivot to VR as a repudiation of more-conventional storytelling. “VR and traditional filmmaking are very different experiences and it isn’t like one is going to take over the other,” he said. But he was keen pushing for more interactive possibilities in future projects. “We want to give the viewer choices that are not about right and wrong or the mechanics of getting from point A to point B, but choices that force the viewer to dig into who they are,” he said. “All of those things add up and a lot of complexity and subtlety to the experience and make them feel like their choices matter.”