Outlander has been delving into the harrowing subject of time travel over the past five seasons. With so much up in the air, Brianna Fraser (played by Sophie Skelton) and Roger MacKenzie (Richard Rankin) have steered clear of attempting to go back to the present day during the ongoing troubles they have experienced during the 1800s. But this week saw the STARZ couple making the decision to finally go back to where they came from.

Unfortunately for the family, things are never as simple as they would like.

The trio took hold of their gemstones and supposedly jumped forward in time looking for a brand new way of life.

However, when they woke up Jemmy ran towards something off screen, leaving Brianna and Roger to stand staring it, shocked.

In a breathy remark of disbelief, Roger exclaimed: “What the devil?!”

Fans of the show have been working hard on theorising what exactly the family have stumbled upon on the future. 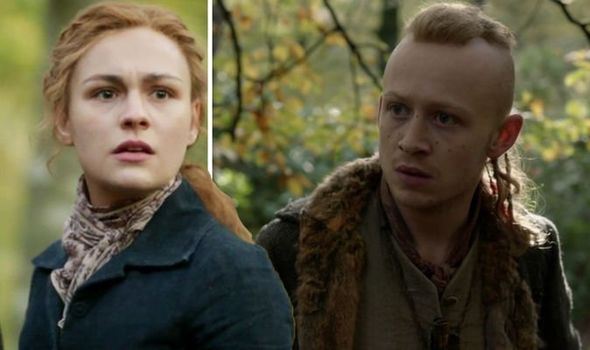 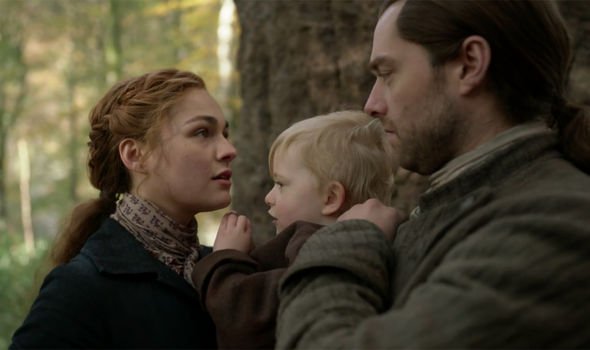 While it is evident the small family certainly jumped through time, it is not yet clear how far forward – or back – they went.

Fans have been suggesting the family have found some sort of message laid out for them, perhaps even warning them off of some sort of problem.

One fan wrote: “They had three stones and Brianna had him hold one “Hold it tight!’ ‘Holding it tight mama!’

“I’m thinking someone built something on that spot as a message to them for them to find in the future.”

Could Brianna’s parents Claire Fraser (Caitriona Balfe) and Jamie Fraser (Sam Heughan) have left her some sort of message? 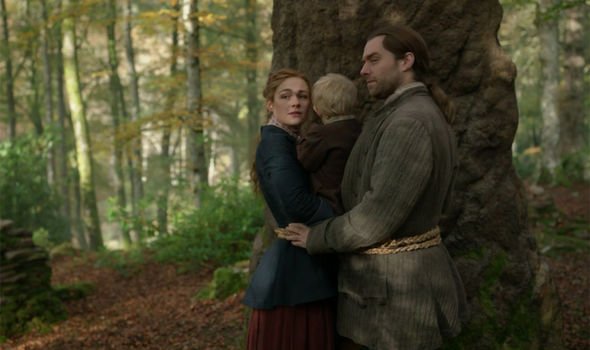 Another fan thought so, as they wrote: “Not a spoiler, just my theory, as I don’t know. They’re in the right time and place, but someone built something there as a message to them when they reached the future.

“Since Jemmy was running at something saying ‘look mama!’ all happy.

“They tried to hide it, but did you notice the stack of stones next to Jemmy that looked man made? I don’t think they were there before, and it had to have been shocking to see something that wasn’t there before.

“If it were a person they’d have to be someone close to Jem, and we know that the only people close enough to him to get that reaction are his parents or [they] are still in the past.”

Time travel has never been an exact science for Frasers, and they haven’t ever truly worked it out completely.

Could this jump forward in time simply not have worked as expected, and Brianna was about to find a message to her telling of something awful happening?

Viewers already know Claire was captured in the final scenes of the episode – could something dreadful happen to her, leaving Jamie to send a message to Brianna telling her of the awful event?

If so, fans only have one final episode of the season to witness how things are going to be played out.

Meanwhile, Jamie star Sam recently spoke out about his final scenes on Twitter during a live Q&A – and things don’t sound good for the Frasers.

The actor was asked: “Finally, we HAVE to ask… Can you give us any hint as to what we expect from the season finale next week? @SamHeughan #Outlander.”

To which the actor replied: “Expect the unexpected. It’s gripping and a tough ep. Let’s hope the Frasers make it together….”

Outlander airs Sunday on Starz in the US and drops Monday on Amazon Prime in the UK.