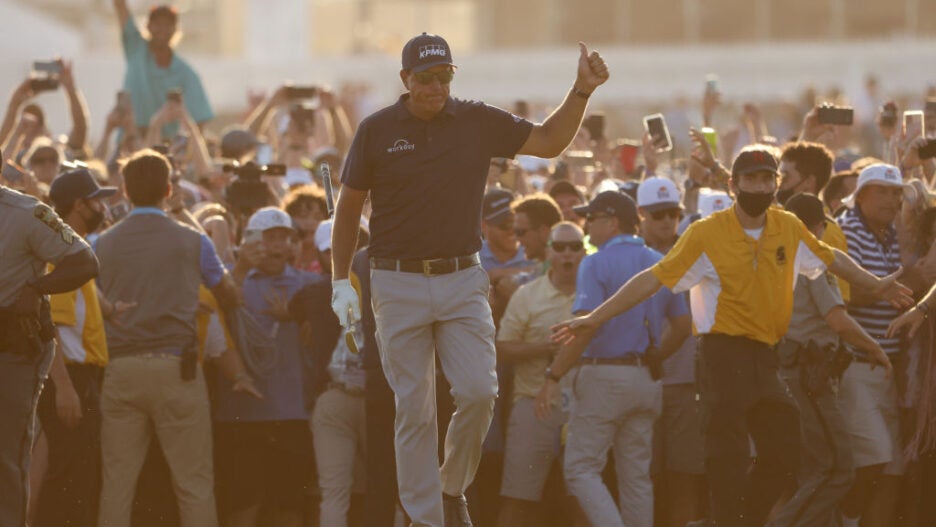 KIAWAH ISLAND, SOUTH CAROLINA – MAY 23: Phil Mickelson of the United States gives a thumbs up as he walks to the 18th green during the final round of the 2021 PGA Championship held at the Ocean Course of Kiawah Island Golf Resort on May 23, 2021 in Kiawah Island, South Carolina. (Photo by Jamie Squire/Getty Images)

Phil Mickelson made golf history on Sunday, winning the PGA Championship to not only earn his sixth major title but also become the oldest player ever to win a major tournament.

The 50-year-old veteran broke a record that has stood since 1968, when Julius Boros won the PGA Championship in 1968 at the age of 48. It is Mickelson’s second PGA Championship victory, following one in 2005, and also joins his Masters victories in 2004, 2006 and 2010 as well as a 2013 Open Championship title on his list of major victories.

Mickelson held off challenges from fellow major winners Brooks Koepka and Louis Oosthuizen, winning by two strokes with a score of six-under-par. As Mickelson approached the 18th green to cement his victory, fans at Kiawah Island swarmed the course behind him in a scene reminiscent of Tiger Woods’ historic victory at the Masters two years ago.

Mickelson is now tied for 12th on the all-time major championship list, joining Nick Faldo and Lee Trevino on the list of six-time champions. He now looks ahead next month to the U.S. Open, the one major championship he has never won but has finished as runner-up six times.