This Morning was back with the midweek instalment and Holly Willoughby and Phillip Schofield were live in the ITV studio. After kicking off the show with the breaking news Prime Minister Boris Johnson and partner Carrie Symonds had welcomed a baby boy earlier this morning, the hosts began with their first segment which revolved around Donald Trump’s comments regarding coronavirus being cured by using bleach or disinfectant on or in the human body. Following a short clip, Schofield branded Trump “stupid” for such suggestion, and those watching at home in turn slammed the magazine show for a “ridiculous lesson on how to use bleach” safely around the house.

A few days ago, the President of the United States caused an outcry when he suggested researching whether coronavirus might be treated by injecting disinfectant into the body.

During the briefing, he also appeared to propose irradiating patients’ bodies with UV light – an idea dismissed by a doctor.

Disinfectants are hazardous substances and can be poisonous if ingested, and even external exposure can be dangerous to the skin, eyes and respiratory system.

This Morning, showed a brief clip of the comments Trump made to their viewers and Schofield followed this up ranting his own opinion. 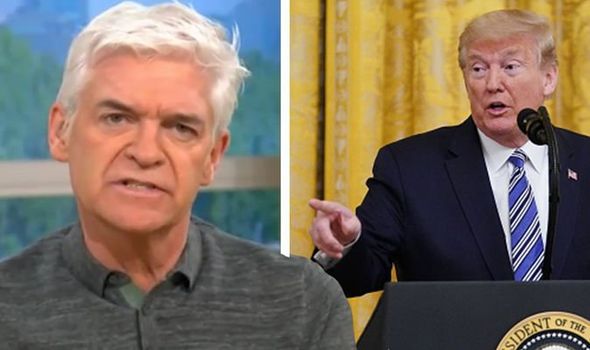 “It’s incredibly to think, anyone who’s stands in front of that mighty White House sign could be so stupid,” the presenter began.

“Since then the American President has defended his comments calling them sarcastic – even though they were unbelievable dangerous.

“But despite the shocking remarks, just how should you use disinfectant effectively and safely during lockdown?” Schofield added and then introduced Consumer Editor Alice Beer who blasted Trumps comments.

She said: “I was absolutely flabbergasted!”

Those watching at home saw Beer go through all the varieties of cleaning materials and how you should safely use them around the house.

But This Morning viewers didn’t understand the need for the show to dedicate a whole segment to this topic.

Taking to Twitter to comment, one said: “Oh good grief…lessons in how to use bleach! Why did I switch the channel? #ThisMorning.”

“Teaching the British public how to use bleach… #ThisMorning,” another wrote.

Someone else added: “Can’t believe they are doing an item on how to use disinfectant and bleach just because of what that arse who is in charge of America said. #ThisMorning.” 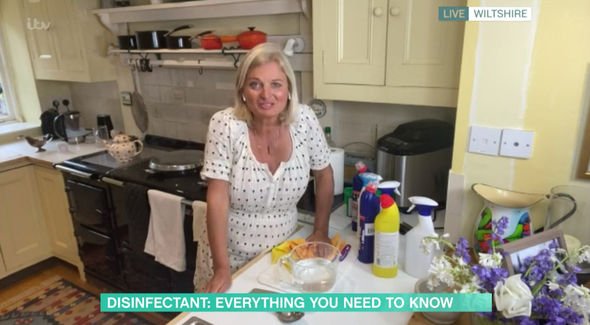 “This bleach/disinfectant talk is so feckin boring it’s ridiculous #ThisMorning,” one viewer slammed.

A tweet read: “Seriously giving us a lesson on how to use bleach??? *turns over* #ThisMorning.”

“Anyone would think the British public are thick! Showing us how to use bleach #ThisMorning #Lockdown,” another suggested.

Someone else commented: “#ThisMorning there’s a woman on the telly telling you how to use bleach ffs !!!!”

“Cannot believe they are actually showing how to use disinfectant safely because of Trumps comments, if your that dumb to believe him then there is no hope for you #ThisMorning,” one more said.

Since Trump’s comments, big-name bleach and disinfectant brands have taken to social media, strongly suggestion no one ingest or use their products unless they are cleaning safely.

Doctors warned that the president’s suggestion could have fatal results.

“These products have corrosive properties that melt or destroy the lining of our innards,” McGill University thoracic surgeon Dr Jonathan Spicer told the BBC.

He said suggesting ingestion of a household cleaning product was “extremely dangerous”.

“No one should be undergoing any preventative measures, as suggested by the president, without some kind of guidance from a licensed physician with the expertise in managing Covid-19,” Dr Spicer added.