Piers Morgan left Good Morning Britain viewers divided again once again today after he interviewed Helen Whately MP live on the show again following an appearance last week. This time around he accused the Minister of Health and Social Care of sharing “utter nonsense” over her claims 19 NHS workers had died on the frontline. It comes after he suggested she was laughing when he brought up the latest statistics in regards to the coronavirus sweeping the nation last week. Following Whately’s two appearances, over 2000 complaints have been made to Ofcom and an investigation could be carried out.

During this morning’s instalment of GMB, viewers tuned in to see Morgan and Susanna Reid joined by Whately on a live video link once more where she was asked the same question as last week.

“Do you know how many people have died in the health care system, both in hospitals and in care homes? The workers?” Morgan began.

Whately answered: “We know 61 NHS workers have very sadly died and we have a figure at the moment of 15 care home workers who have died.”

Unconvinced by the figure, Morgan stated: “Your numbers again are completely wrong. 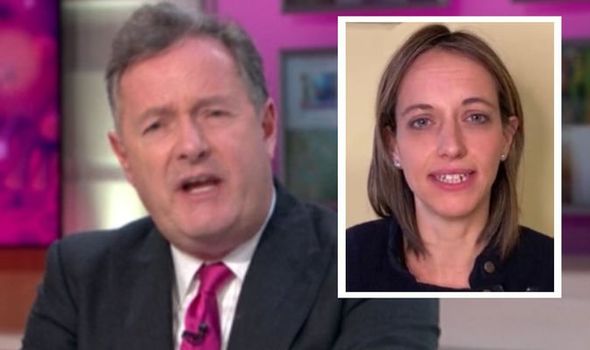 “You as a government are massively understating the scale of what is going on in terms of a death toll for our health care workers and the care home workers,” he continued.

Last week, Morgan accused the guest of laughing when he spoke about a spike in care home workers deaths.

Whately made it clear: “I’m coming to answer your questions but -“

“Why are you laughing? What do you find funny about this?” Morgan hit back.

“I don’t think it’s funny in the slightest!” Whately defended but those watching at home saw the presenter ask again: “Then why do you keep laughing?”

“I’m not laughing at all,” Whately replied.

“I literally just asked you; is it true that 4,00 elderly people have died and all you can do is laugh! What is the matter with you?” Morgan slammed.

Those watching at home were divided over Morgan’s accusation and this sparked 1,910 Ofcom complaints.

The regulator said in a statement to The Sun Online: “We are assessing the complaints against our broadcasting rules, but are yet to decide whether or not to investigate.”