As violent as it is thoughtful, this Spanish movie dissects the webs of shame and secrecy that bullying breeds. 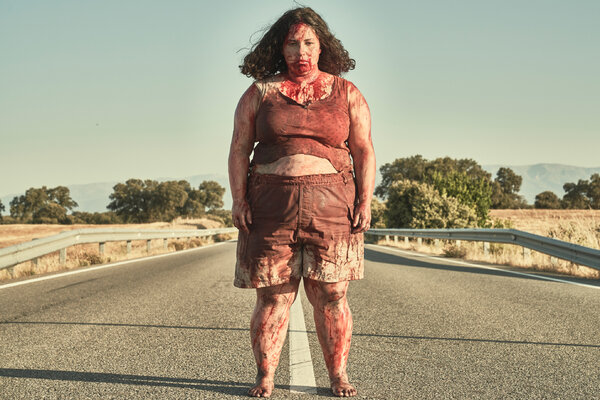 The teenager Sara (Laura Galán) is comfortable with sharp knives and death: She helps out in her father’s butcher shop, after all, and they often hunt together. As we watch a trio of mean girls mercilessly mock Sara because she’s overweight, it’s natural to expect a brutal payback — that the poster for this Spanish movie depicts the lead drenched in blood might be another clue. But while “Piggy” does take a gory turn, it’s also a left one: The director Carlota Pereda carefully sets up our expectations only to subvert them.

Right after her tormentors steal her clothes while she’s enjoying a solo swim at the local outdoor pool, Sara watches them being abducted by a mysterious stranger (Richard Holmes). That man, hulking and grunting, is an agent of chaos, his motives unknown and his actions seemingly arbitrary. He is simultaneously terrifying and fascinating to Sara, who has plenty of reasons to at least fantasize about violent retribution. But she is not the victim-turned-avenging angel so often found in horror movies or thrillers, and instead emerges as a complicated protagonist who makes mistakes and is not always easy to like. So is her well-intentioned mother (Carmen Machi), who thinks Sara must diet to avoid taunts.

Pereda, who also wrote the script, is not afraid of psychological and moral ambiguity: It’s obvious that she is on Sara’s side — the bullying scenes are much harder to watch than the bloody ones — but she also knows that shame, guilt and secrecy fester into messy situations and messy people.

Piggy
Not rated. In Spanish, with subtitles. Running time: 1 hour 30 minutes. In theaters.