What if someone told you your favorite Sexand the City character was a figment of Carrie Bradshaw’s imagination? Itwould probably completely turn the show and your feelings about it upside down.Well, that’s exactly what SarahJessica Parker, who portrayed Carrie for six seasons on HBO and in two movies,would like fans to believe. The seasoned actress took to a podcast to suggest herfamed character created her friends in her own mind to help propel forward hersex column.

Back in 2016, Parker appeared on the podcast, Nerdist,and discussed her time on Sex and the City. In the middle of theinterview, Parker dropped a bombshell that shocked fans across the globe. Shesuggested that Carriewas the only “real” character on Sex and the City. Parker explained thatSamantha Jones, Miranda Hobbs, and Charlotte York were “archetypes” of differentwomen. 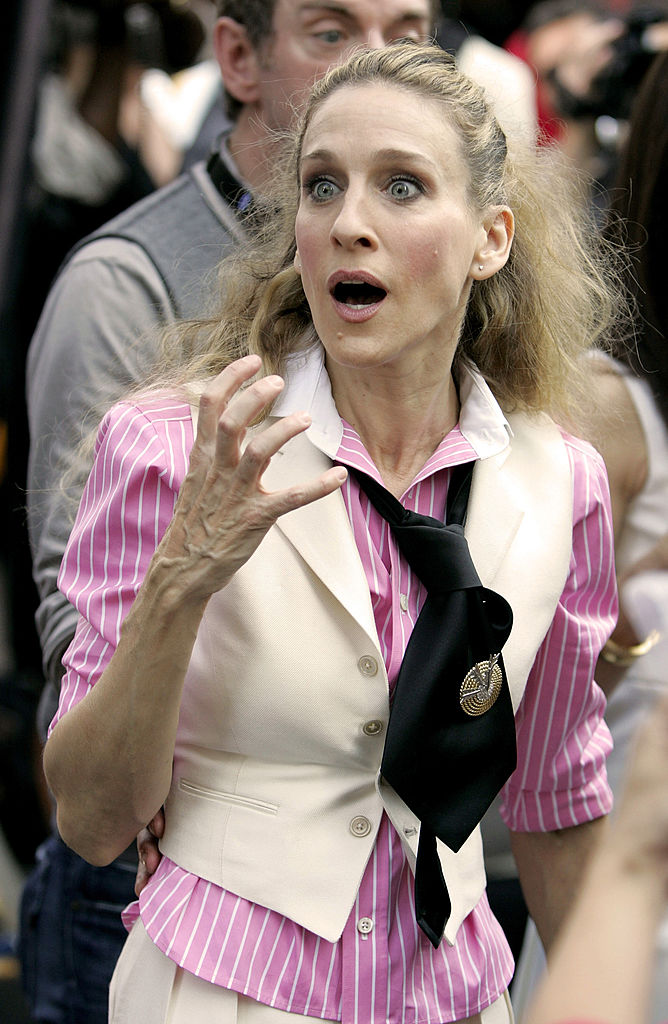 TheVerge explained that Parker essentially stated that each of the women, andthe life events they dealt with during the six-season run of Sex and theCity, were made up by Carrie for the purpose of her sex column. So,basically, the women’s friendship, which seemed to be the underlying theme ofthe series, was simply a figment of Carrie’s imagination, and a way ofgrounding the fictitious column that Carrie wrote for The New York Star.

Parker’s theory could have held water. Carrie’s monologuesin each episode could give Parker’s theory some credence. The monologues, whichexplained the situations that she and her friends find themselves in,  could have been a way to tip audiences off tothe fact that Miranda, Samantha, and Charlotte were not real and that all eventsseen during an episode were from Carrie’s perspective only.

What archetypes did the women represent?

Parker’s theory suggests that each woman is an archetype,meaning they embody traits that are considered typical. Each woman is inherentlydifferent, and that’s part of what made the series great, but if you look at itfrom a different angle, each woman seems to embody stereotypical attributes.

EXECUTIVE REALNESS | The ideals of good old-fashioned American sportswear are alive in this outfit, which encapsulates everything that we imagined chic New York women looked like when we were eight years old. It’s also the kind of look that says, “Yes, I am a deeply classy bitch with a ivy league law degree. But I’m not above having transgressive sexual fantasies about a man in a sandwich costume.” (S3/EP11) #MirandaHobbes #Classy #Belted #Chic

Take Miranda,for example. Miranda is a classic type-A personality. She was a driven,successful perfectionist. Her personality seemed to serve her well in hercareer but often left her standing out in the cold when it came to findinglove. Miranda often noted that her professional success made her intimidatingto men.

Listen to me boy and girl. I’m only going to say this once. We’re going to Barneys now. It’s going to be rough. It’s going to feel like it’s going on for a long time. But you have to do everything I say or we will NOT make it! I am a size 2, but occasionally a size 4 in european designers. We are looking for Burberry, Ralph Lauren, and Prada. Under no circumstances are you to go near the Off-White or Versace. Now let’s start in the shoe department. (S6/EP13) #CharlotteYork #BirdBox #BurberryFetish #BarneysNewYork #ObligatoryBirdboxContent

Charlotte is Miranda’s opposite. Charlotte’s goal was tofall in love, get married, and have children. There was absolutely nothingwrong with her aspirations, but Charlotte’s deep obsession with finding theperfect mate certainly made her seem a bit one-dimensional, and, at times, reallyshallow. Critics of Charlotte often note how she married TreyMcDougal quickly because he was good looking and successful, but didn’twant to publicly link herself to Harry Goldenbatt because he didn’t meet herphysical requirements for a mate.

Samantha was the woman who could not be tamed. She trulydidn’t seem to care what anyone thought of her and lived her life withoutapology. Samantha was supposed to be the sexually liberated lady of the group. Tosome, Samanthawas an intimidating force; to others, she was the perfect blend of unapologetichonesty.

Contrary to popular belief, Chanel No. 5 is a truly vile fragrance (don’t @ us) but we do appreciate Samantha’s statement earrings nonetheless. This way, she can pay tribute Gabrielle Chanel’s pioneering scent without smelling like Bunny MacDougal. (S6/EP3) #SamanthaJones #ChanelNo5 #Fragrance #StatementEarrings

Carrie was supposed to embody a little bit of each of herfriends. Her career was important to her, but so was love. She was sexuallyliberated, but still harbored a bit of Charlotte’s more conservative thoughtson sex. Carrie made serious missteps in the name of love, just like Charlotte,but remained a bit skeptical of romantic gestures, just like Miranda.

While Parker’s theory is certainly interesting, it reallyshook fans. To think Miranda, Charlotte and Samantha weren’t really people completelyalters the show and the feelings fans have attached to the characters. Thankfully,the writers didn’t follow the plotline, perhaps because they knew it doesn’twork. In fact, a similar plotline was deployed to wrap up Roseanne,and television audiences absolutely despised it.

Happy Valentine’s Day to all the single, thirty-something women out there…

Roseanne capped its nine-season run by suggesting themajority of the show’s storylines were dreamt up by its title character,Roseanne Connor. Everything was a figment of Roseanne’s imagination, crafted inher basement writing room. According to DigitalSpy, Roseanne’s finale was one of the most hated show finales of alltime. It was so hated that when the show was rebooted as The Conners, writerscompletely ignored that original show’s finale.