Tayshia Adams just let everyone know that she is *not* the one to mess with. Aka she won’t be taking anyone’s BS during her season of The Bachelorette—and that applies to news outlets too. Earlier this week, E! News and other outlets reported that her ex-husband, Josh Bourelle, will appear on her season. The rumors started after a TikTok fan noticed that Josh’s name was accidentally captioned in a Bachelorette promo. The caption has since been edited, but the damage was done. However, Tayshia jumped on IG to set the record straight.

“Don’t forget to stretch before you reach,” she commented on a post about Josh on Nov. 13. “CAN WE MOVE ON PLEASE AND STOP REACHING!!! Leave him alone this [is] about my journey and not my past!” 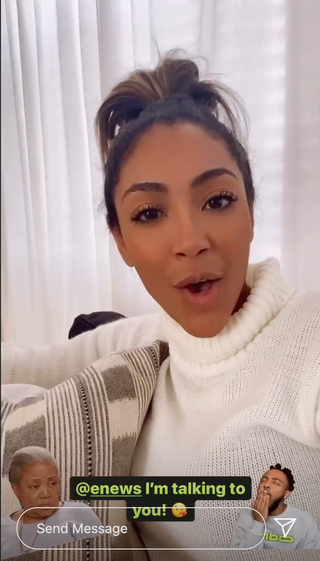 Daaaaamn. And she didn’t stop there—she also discussed the rumor in multiple Instagram Stories. “Okay, can we just talk about something for a second? Yes, I have been married and yes, I am divorced,” she began. “And yes, now I am the Bachelorette and I am dating 20 men on ABC every single single week. So, the fact that we are continuously talking about my past relationship that was, I don’t know, three years ago. I don’t understand… I don’t get it.”

She continued, “He’s living his life. I’m living my life. You have plenty of other people who have signed up to be researched and talked about. He never signed up for it. So, why don’t we leave him alone and talk about something that actually matters. Honestly, I’m bored with this entire topic—let’s move on and find something more interesting. Thank you.”

And that’s that on that.