One competitor down, nine (planned) contestants to go 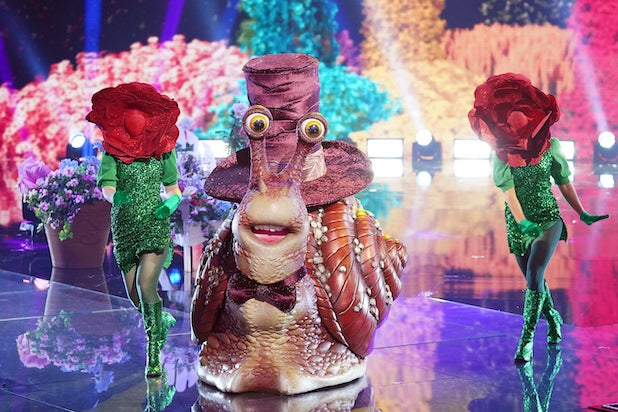 (Warning: This post contains spoilers for the Season 5 premiere of Fox’s “The Masked Singer.”)

Fox has been promoting the fifth season of “The Masked Singer” as the oddball competition’s “game-changing” installment. And after Wednesday’s premiere, it’s clear they really mean it.

On tonight’s hour, the five competitors in Group A — Russian Doll, Snail, Raccoon, Seashell and Porcupine (or Robopine, as he would like to be called) — performed in front of the judges and guest host Niecy Nash (filling in for Nick Cannon, who is recovering from COVID-19) for the first time.

Judges Jenny McCarthy, Ken Jeong, Robin Thicke and Nicole Scherzinger all made their initial guesses about these costumed celebs’ identities, in hopes of winning the Golden Ear Trophy, which goes to the judge with the most correct “first impressions” come the end of the season. (McCarthy currently holds the title, after it was first introduced last season, and even wore a crown on her head during the premiere to show off.)

After Russian Doll (which appears to be more than one contestant — but we’re not sure how many yet), Snail, Raccoon, Seashell and Porcupine all sang their little hearts out and the show’s new “clue-meister,” Cluedle-doo, gave fans a few extra hints, it was time for the judges and at-home audience to cast their votes for Wednesday’s top contestant.

The performer who came out on the bottom was Snail, who sang “You Make My Dreams Come True” by Hall & Oates. Before the Snail was unmasked, Thicke guessed he was Seth MacFarlane, Jeong said he must be Jay Leno, McCarthy picked Ted Cruz and Scherzinger threw out Billy Crystal. They were all wrong, as the Snail turned out to be Kermit the Frog. Yes, the celeb inside the Snail costume was the world’s most famous Muppet, and the judges went wild.

Fox has said “The Masked Singer” will start Season 5 with 10 scheduled contestants, who will be broken into two groups of five competitors, Groups A and B. But the broadcast network also said that throughout the season, the show will introduce “several” surprise contestants at the end of episodes in “Wildcard” rounds, giving these crashers a chance to unseat the regulars.

So next week when Group B — Phoenix, Grandpa Monster, Chameleon, Black Swan and Piglet — debuts on “The Masked Singer” stage, there’s a chance a “wildcard” competitor could be coming in, too.

“The Masked Singer” airs Wednesdays at 8/7c on Fox.