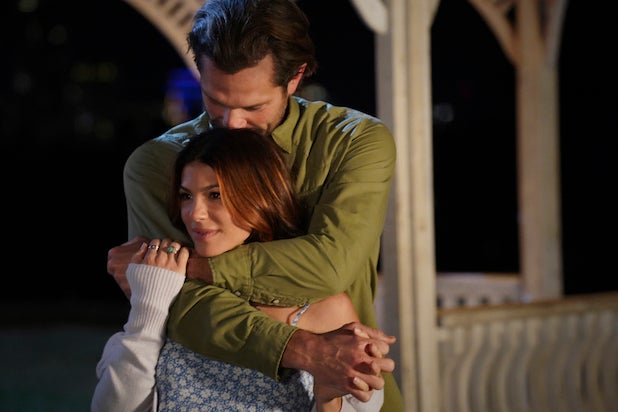 The CW’s “Walker, Texas Ranger” reboot, “Walker,” premieres Thursday, introducing “Supernatural” alum Jared Padalecki in the iconic title role of Cordell Walker, which was played by Chuck Norris on the original ’90s series. And at Padalecki’s side will be his real-life wife, Genevieve Padalecki, playing his on-screen wife.

Well, for the first few minutes she will be, as the mysterious death of Cordell’s spouse, Emily Walker, is what kicks off the drama’s plot. And just because Gen knew her character’s fate when she joined the project, doesn’t mean it was any easier for her and Jared to play out that tragedy for “Walker.”

“So when I first signed onto it, there was only the pilot that had been developed and the character, she had gone through a couple of different revisions and such to get where she is now,” Genevieve Padalecki, who previously worked with her now-husband on “Supernatural,” told TheWrap. “But there was definitely that like, ‘Where is this going to go? And how is it going to play out?’ [feeling]. And the current cut that it is now, it kind of came about fairly recently as well, to give it a little bit more of a weighted-ness to it, to see her suffering in that way and to see that image of her lying on the ground and kind of barely breathing with blood on her. That was definitely a later call.”

(We won’t spoil exactly how Emily gets in that position — but that’s also because we have no idea, seeing as that’s the central mystery for Season 1.)

“And it’s gut-wrenching too, because on one hand, I want her to come back,” the actress continued. “Like, I want to continue working with [Jared] and I also don’t want to envision myself in this capacity. This is awful! So yeah, it’s definitely, like, you know, churned up different emotions for us, for sure, that we’ve sort of… like not want to talk about and that sort of thing. And there’s definitely a gravity to it. But at the same time, there is also a lot of play with it too and sort of letting go of the gravity and have fun creating it as well. I think there’s probably both sides to it. It just depends on the day, I guess.”

Emily’s absence in the present won’t affect Gen’s presence on “Walker,” as she will be making multiple appearances in flashback sequences throughout the show, allowing viewers to see her life with Cordell and their two children, Stella (Violet Brinson) and August (Kale Culley).

“Emily had a really big impact and I really think she was a lot of the glue for this family and in keeping Walker’s head on straight,” Genevieve Padalecki said. “You’ll get to see different flashbacks in which you’ll see the relationship and you’ll see him in a very different light with his wife where he maybe isn’t what other people think. And you’ll get to really see where Cordell Walker comes from and where that family dynamic comes from… You’ll definitely get to see those moments throughout the season and get to see that family dynamic intact, which is really sweet and fun to play.”

For all your “Supernatural” fans who will be tuning in tonight to see Jared Padalecki transition into Cordell Walker after playing Sam Winchester for 15 seasons alongside Jensen Ackles, we’re sure you’re probably wondering how Gen feels about her own part in “Supernatural,” the demon Ruby, versus her new role in “Walker.”

“When I stepped in to play Ruby, I didn’t understand the gravity of stepping onto that set and the weight of that character,” Padalecki, who took over the part from Katie Cassidy in Season 4 of “Supernatural,” said. “I stepped onto that set not really knowing a ton about ‘Supernatural.’ I’d just come off of ‘Wildfire,’ which was a really sweet show about a girl and her horse, to this demonic character. And I was like, ‘Well, she was a human once, so I’m going to play it as, you know’ — not playing it the way that Katie played it, which she did a fantastic job creating Ruby and establishing her and I kind of took it in a different direction. I was so stressed about it for so long and not wanting to disappoint fans and people. And I loved playing her because it was so not me and so wild and the things that she did and the manipulation that went on was just so not me. It was so fun and also really nerve-racking.”

She continued: “But playing Emily, it’s fun and sweet and I love the fact that right now I’ve created something from scratch and to be able to have fun with her and create a whole different relationship and marriage. And being a mother, it’s really fun. I love both of them for sure. And I think that playing Emily is certainly scary right now because we haven’t aired and it’s like, ‘Oh God, are people going to like this? I hope they enjoy it.’ And all the feelings that go into watching a new show. Both are equally satisfying, but I’d say Ruby was a little bit more stressful.”

“Walker” premieres tonight, Thursday, at 8/7c on The CW.