Oscar winners and family favorites lead this month’s parade of titles departing from Netflix in the United States, along with an unnerving indie thriller, an immortal Australian franchise starter, a beloved ’90s rom-com and a controversial Stanley Kubrick classic. (Dates reflect the final day a title is available.)

Meryl Streep picked up her third Academy Award for this 2011 portrait of the former British Prime Minister Margaret Thatcher, and it’s a stunning transformation. (The film’s makeup team also won Oscars for their work). But Streep’s performance is no mere impersonation; she digs deep into the complicated personality of the conservative stateswoman and the inconsistencies (some might say hypocrisies) she personified. Abi Morgan’s inventively structured screenplay jettisons the expected cradle-to-grave construction, dramatizing instead her life in a series of flashbacks inspired by both her grief and Alzheimer’s disease. Jim Broadbent is warm and winning as her husband.

What would you do if your good friends — people you have known for years, trusted and loved — joined a cult? How would you react if they welcomed you into their home, sat you down in their living room and began forcibly explaining why you should join, too? That’s the question at the heart of this gripping thriller from the director Karyn Kusama (“Girlfight”), in which a young man (Logan Marshall-Green) is invited to the home of his ex-wife (Tammy Blanchard) for a reunion and dinner party that takes a decidedly dark turn. The thriller elements are sharp, but its provocative central conundrum — How to get through to friends who’ve seemingly lost touch with reality? — has grown only more pointed in the years since its early 2016 release. 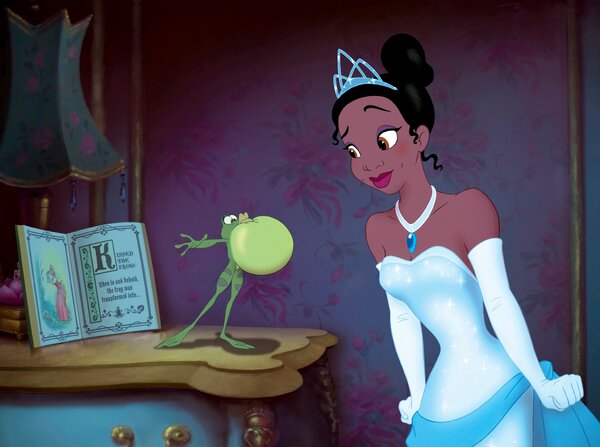 Disney’s 49th animated feature was also the first with an African-American “Disney princess” — a long-overdue gesture but a welcome one nevertheless. It wasn’t just a surface alteration; the directors Ron Clements and John Musker adapted the classic children’s fairy tale “The Frog Prince” to New Orleans of the 1920s, taking full advantage of Bayou culture with memorable, ragtime-style songs (by Randy Newman) and delightful updates to the original story. Anika Noni Rose voices Tiana, a waitress and chef whose dream of owning her own restaurant is interrupted by a witch doctor’s spell that turns her — and her perspective suitor, a fun-loving prince — into frogs. Oprah Winfrey, John Goodman, Keith David and Terrence Howard are highlights of the impressive voice cast.

One of the last remaining prehistoric families finds their methods of survival — and thus, their entire way of life — challenged in this frisky, funny animated comedy. Nicolas Cage, an actor so operatically expressive that it’s shocking he hasn’t done more animated work, is both amusing and empathetic as the patriarch of the Crood family, who will go to any length to keep his family safe; Emma Stone is a delightful counterpoint as his teenage daughter, who, like most rebellious teens, is just looking to break the boredom. Ryan Reynolds, Catherine Keener and Clark Duke charm in supporting roles, but the scene stealer is Cloris Leachman, hilarious as the family’s fierce grandmother.

The Academy Award winner for best picture of 2015 is an “All the President’s Men”-style chronicle of investigative journalism at its most urgent. Telling the true story of how the team at the Boston Globe unearthed widespread sexual abuse by Catholic priests, the director Tom McCarthy focuses on the nuts and bolts of the journalism — how each isolated tip and victim leads to another, and another, and another. A flawless ensemble cast (including Michael Keaton, John Slattery, Liev Schreiber, Stanley Tucci and the Oscar nominees Mark Ruffalo and Rachel McAdams) runs the full emotional gamut, from skeptical and cautious to fiery and impassioned; the results are gripping, intelligent and powerful.

Stanley Kubrick’s 1971 adaptation of the Anthony Burgess novel would become his most controversial film, a dark and disturbing examination of violence (and its glamorization) that refuses to let viewers off the hook. Kubrick’s dynamic direction puts us uncomfortably close to the thrill crimes of its protagonists, a group of youthful hooligans in a vaguely futuristic Britain led by the charismatic Alex (Malcolm McDowell, at the top of his game). The picture’s ultraviolence and pitch-black humor proved so upsetting to viewers that the director took it out of circulation in England for decades; the passage of more than a half century has done little to blunt its force.

The pitch for this 1991 adventure — Steven Spielberg directing a follow-up to “Peter Pan” with Robin Williams as an adult Peter and Dustin Hoffman as Captain Hook — seemed so irresistible, such a perfect confluence of elements, that when the results were somewhat uneven, critics (and some audiences) dismissed it outright. But talk to anyone who was a child when “Hook” was released, and you’ll hear a different story, about an endlessly rewatched favorite. And children, lest we forget, were the target audience, as evidenced by the film’s eye-popping color palate, youthful supporting cast and firm embrace of the magic of imagination.

Every single film by the Wachowskis is a big swing, even when they’re crafting such seemingly safe bets as a television adaptation (“Speed Racer”), an adaptation of a best-selling novel (“Cloud Atlas”) or a follow-up to an earlier hit (the “Matrix” sequels). They can’t help but take risks, even when silliness or audience alienation is at stake. And if this big-canvas fantasy adventure isn’t quite a home run — the narrative pieces don’t quite fit together, and the performances are tonally disparate — the sheer ambition of its creators is as overwhelming as ever, and it is refreshing to see big-budget filmmaking that so stubbornly refuses to play by the rules.

Before the massive production of “Fury Road,” or even the rough-and-tumble “The Road Warrior,” the Australian director George Miller introduced the action legend “Mad” Max Rockatansky in this lean, mean slab of “Oz-ploitation” filmmaking. And he introduced a little-known Aussie actor named Mel Gibson in the title role, a police officer in a crumbling society who becomes a bloodthirsty vigilante after a criminal gang attacks his wife and child. A first-time director, Miller was working with a tiny budget and limited resources. But his talent for genre filmmaking was already evident; the metal-crunching car chases are staged with jittery ingenuity, while the emotional beats are brutally effective.

When Julia Roberts headlined this 1997 romantic comedy, it was framed as a comeback vehicle, implying that she had wandered too far from her bread and butter with appearances in darker fare like “Mary Reilly” and “Michael Collins.” But this was no lightweight rom-com; the director P.J. Hogan (“Muriel’s Wedding”) and the screenwriter Ronald Bass (“Rain Man”) allow Roberts to tinker with her audience’s expectations, complicating their assumed empathy for the actor with her character’s questionable (and even cruel) motives and actions. And Cameron Diaz is brilliantly used as the target of her ire — a character so warm and sunny, we can’t help but wonder whose side we’re really on.

In the aftermath of a raging zombie apocalypse, it’s kill or be killed. And the primary pleasure of this double-barreled action comedy is the extent to which the screenwriters Rhett Reese and Paul Wernick have worked through the logistics of this hellscape, as articulated by the hero (Jesse Eisenberg) and his rules for survival. An introverted college student, he joins forces with Tallahassee (Woody Harrelson), a gunslinging cowboy type, and the sisters Wichita (Emma Stone) and Little Rock (Abigail Breslin) on a journey through the chaos. The director Ruben Fleischer keeps the laughs and gore coming at a steady clip, so thoroughly adopting the hip approach of “Ghostbusters” that Bill Murray even shows up to play along.