Matthew Teague is a journalist who’s traveled to remote corners of the world for stories. He covered C.I.A. operatives in Pakistan, famine in Somalia, double agents in Northern Ireland. But his greatest work may be the essay he wrote in 2015 for Esquire magazine, titled “The Friend.” Teague dedicated some 6,000 words to the arduous two years he spent caring for his wife, Nicole, who learned she had terminal cancer at age 34.

The essay told the story of her deterioration and death through the prism of their friendship with Dane Faucheux, a rudderless soul who came to visit the Teague family for Thanksgiving and ended up staying for two years to care for the couple and their two young daughters. Besides winning a National Magazine Award, the essay connected Teague to readers in ways his dramatic reporting from Afghanistan or Sri Lanka never did. They shared their own painful stories with such overwhelming force he was often “struck dumb" by the response. To this day, he receives impassioned, heartbreaking letters.

And Teague, now 44, knew the drill. Two of his previous pieces were optioned by various producers, but no movies were ever made. He vowed things would be different this time.

What he didn’t account for was just how cruel Hollywood can be when a movie does come together, an experience he is still coming to terms with.

First he tried his hand at writing the screenplay himself. When that didn’t work (“I realized I’m too close to this,” he said) he signed on as an executive producer and worked closely with the writer Brad Ingelsby (“The Way Back”) to craft a film that both depicted the realities of death and celebrated the life that came before.

Soon a cadre of well-known actors (Casey Affleck, Dakota Johnson, Jason Segel) descended on Fairhope, Ala., to portray the Teagues and Faucheux. Gabriela Cowperthwaite directed the actors in scenes shot in the hospital where Nicole was treated and in a home just three doors down from the Teague residence. (The family still lives in the same house. Teague has remarried and now also has a 3-month-old son named Wilder.) 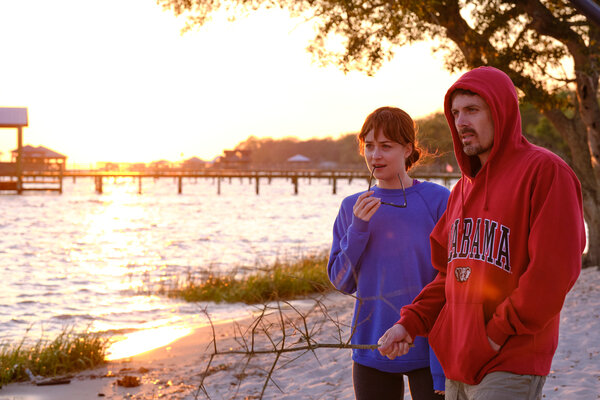 Toggling between past and present, the script jumps headfirst into both the nastiness of cancer and the banalities of married life, presenting a portrait of a family that is both completely recognizable and terrifyingly unique. Young women are not supposed to die of cancer in their home while their small children are in the next room.

But fueled both by the profound reaction to his essay and by his career as a journalist, Teague was wedded to authenticity.

“The gist of it is I wanted my wife’s legacy and memory to be one of enormous respect. I didn’t want to mishandle it,” he said. “And I have a mission to tell the truth about that time and everything that came from it.”

There are parts of Teague’s original essay that made it directly onto the screen: the doctor’s words when he revealed Nicole’s diagnosis (“It’s everywhere. Like somebody dipped a paintbrush in cancer and flicked it around her abdomen”), the friendship between Teague and Faucheux, and Nicole’s dying wishes (jumping in a downtown fountain with all her family and friends, becoming the grand marshal in her town’s Mardi Gras parade). “What her life lacked in length, it made up for in height,” Teague wrote in Esquire.

The more visceral parts that, in part, made the essay so memorable were omitted: specifically Teague’s role in the grotesque art of wound-packing and the physical horrors that accompanied it.

“There are things that I can write about in print, and people can absorb and find to be honest,” he said. “Yet, if you see it onscreen, people are going to throw up their popcorn and run from the theater.”

Yet, despite his carefully calibrated work, success in Hollywood is never a guarantee.

The 2019 Toronto Film Festival accepted the film and gave it a coveted opening-weekend slot.

Seated inside the Princess of Wales Theater, Teague was a flurry of nerves, held together only by sheer will and the help of a friend and fellow journalist, Tom Junod, who was also the subject of a Hollywood movie, “A Beautiful Day in the Neighborhood,” about his unlikely relationship with Fred Rogers.

“It surprised me how emotional I felt watching it,” Teague recalled. “But what really took me aback was how emotional the audience was. There were a lot of people feeling a lot of things. So I felt like I had done right by Nicole.”

The actress Kristen Stewart was seated behind him, and hearing her sniffle was additional affirmation everything was going to be OK. There were audible sobs from the audience, a standing ovation and a trip to the stage, where the cast answered an earnest flurry of questions. “There was nothing but love from that audience,” Teague said.

But when he returned to his hotel room later that night, early reviews from the trade publications landed like a gut punch. The Hollywood Reporter called it “out of touch with the very emotions it desperately tries to evoke.” Variety took issue with turning his “devastating essay” into an “inspirational group hug.” In that review, the critic Peter Debruge commended the actors’ performances but wrote, “So much of the unpleasantness has been scrubbed from the picture, until what remains is precisely the kind of dishonest, sanitized no-help-to-anyone TV-movie version of death that inspired Teague to set the record straight in the first place.”

Today Teague still bristles at this criticism. Despite spending years in newsrooms and understanding the role of critics, this particular critique rings as unfair.

“I had just come from a room full of people who had never read the essay, didn’t know anything about the essay and just took the movie on its own terms and found it to be very moving,” he said. “So to have my own story used to beat up my own story was really painful.”

Cowperthwaite felt the wrath too, saying the early reviews “just took the wind out of me.” But the director, who has made four films including the BAFTA-nominated documentary “Blackfish,” has had more experience handling criticism. “It’s just one of the suck-it-up truths behind our industry,” she said. “It never doesn’t hurt, but I think the longer you are in this creative world you learn to metabolize the pain more quickly.”

For Teague, the critiques felt unfair, but more important he was worried about the effect they would have on the fate of the film. Movies like “The Friend” enter festivals with the hopes of securing a hefty distribution deal, and the early trade reviews carry outsize import when studios and streamers are determining what to buy. Would the film find a home with initial critical response so tepid?

“I was in a panic because I didn’t know what was going to happen to this thing that is so precious to me,” Teague said. “Are we sunk? Are people going to get a chance to see it?”

Reviews did improve. In Vanity Fair, Katey Rich wrote that the film “finds a more thoughtful way through the sort of story that often feels rote onscreen, regardless of how devastating it can be in real life.” Its Rotten Tomatoes score is now hovering around 80 percent fresh. And the producer-financier Teddy Schwarzman said the film left the festival with four offers, though an official deal wasn’t announced until January.

Delayed because of the pandemic, the film, now titled “Our Friend,” will now debut Friday in theaters and on demand.

Teague is using the experience as a growth opportunity in his career as a journalist. “The glare of public criticism has helped me be more aware of how frightening and helpless a story subject can feel,” he said in a follow-up email. “It’s easy to forget that, even for a writer who prizes empathy. Sometimes even a brief story — or a hastily written review — can break someone’s heart for a long, long time.”

Yet, he hasn’t given up on Hollywood, either. The writer recently returned to the screenwriting game and adapted his 2003 GQ article about the over-the-top war games in North Carolina into a mini-series called “Pineland” that is now being shopped around.

“It’s not a gentle industry,” he said. “But it has nothing on journalism — my first love — for hard knocks.”