“I call these people the modern-day Rosa Parks — they are protesting against injustice and a loss of liberties,” Stephen Moore says 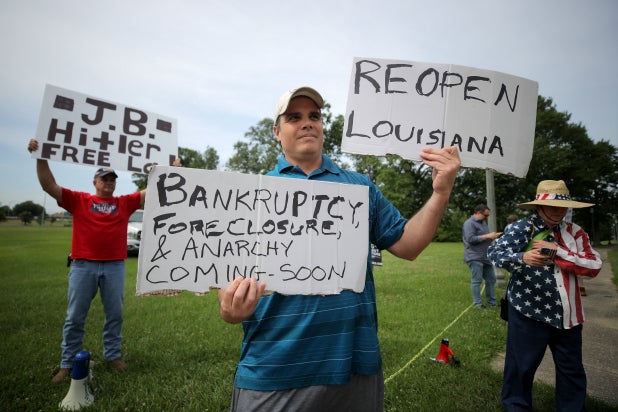 Growing frustrations across the country have erupted in protests as the majority of states have issued orders for residents to stay at home as health care workers and government officials struggle to curb the spread of the novel coronavirus pandemic.

According to conservative economist Stephen Moore, those protestors are just like Rosa Parks.

“I think there’s a boiling point that has been reached and exceeded,” Moore told The Washington Post. “I call these people the modern-day Rosa Parks — they are protesting against injustice and a loss of liberties.”

Rosa Parks, deemed “the first lady of civil rights,” was a civil rights leader pivotal in Montgomery bus boycott, which sought to end the unlawful segregation of black and white Americans.

Parks, in 1955, famously refused to give up her seat in a “coloreds only” section of a public bus to a white man after the “whites only” section was filled. She was arrested and charged with a violation of Chapter 6, Section 11 segregation law of the Montgomery City code, however, Parks had not taken a white-only seat.

Moore, according to the Post, serves on the White House council to reopen the country, as well as on a coalition of conservative leaders and activists pushing state governments to ease stay-at-home orders.

Such orders are meant to promote social distancing and protect individuals from spreading and contracting COVID-19. Protestors have argued that what has effectively become a nation-wide lockdown has thrust the economy into dire straits, as unemployment has hit record levels and companies across industries are at threat of crumbling.

According to the New York Times, 42 states have state-wide orders and three have issued orders for part of the state.

In Michigan, thousands of protestors clogged the streets and descended on the state capitol to protest against Democratic Gov. Gretchen Whitmer after she added additional restrictions to the state’s stay-at-home order.

People have undoubtedly been asked to sacrifice their daily lives as a result of the COVID-19 pandemic, which has killed a reported 35,443 people in the U.S., according to the Centers for Disease Control.

Others would argue that the deathly coronavirus situation is cause for extreme measures.