Meghan Markle and Prince Harry’s lives have been given the Lifetime movie treatment multiple times, according to People. First came 2018’s “Harry & Meghan: A Royal Romance,” followed by 2019’s “Becoming Royal.” However, this isn’t the first time the royal family has been put on full display — they are dramatized in the popular Netflix series “The Crown.”

Queen Elizabeth reportedly watched the entire first season, according to the Express. But a royal official (via Oprah Daily) also revealed what she thinks of the series: “The queen realizes that many who watch ‘The Crown’ take it as an accurate portrayal of the royal family and she cannot change that.” In September 2019, her communications official Donal McCabe sent a statement to The Guardian ahead of Season 3, saying, “Your article … may have the unfortunate consequence of leading your readers to believe that the television series ‘The Crown’ is made with some sort of endorsement by the royal household, or an acceptance by the royal household that the drama is factually accurate. The royal household has never agreed to vet or approve content, has not asked to know what topics will be included, and would never express a view as to the program’s accuracy.”

Despite the drama surrounding previous on-screen depictions of royal family members, Meghan and Harry will be portrayed in yet another Lifetime movie. Keep reading for more details. 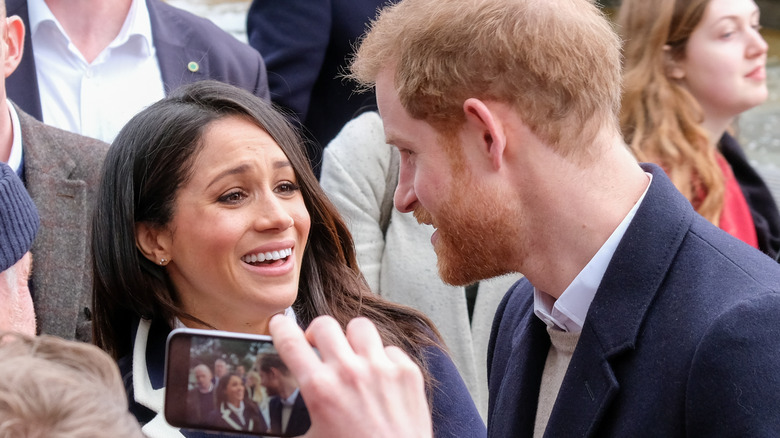 Lifetime is capitalizing on Prince Harry and Meghan Markle’s popularity with another movie, according to the Independent.

“Harry & Meghan: Escaping the Palace” will go inside the couple’s decision to step away from the royal family. According to the synopsis, the movie “will explore what really happened inside the palace that drove Harry and Meghan to leave everything behind in order to make a future for themselves and their son Archie.” Lifetime debuted the trailer on Instagram with the tagline, “Not all fairytales have the perfect ending.” The trailer opens with a seemingly distressed Harry telling his wife, “I see you literally being hounded to death, and I’m powerless to stop it,” and viewers later see Meghan respond with, “I am the person who is strong and gets things right.” They will also recreate their bombshell March interview with Oprah Winfrey. We can already feel the tension!

The film doesn’t seem to be getting two thumbs-up from the public, with one fan calling it “exploitative,” per the Independent. Another viewer took to Instagram and wrote, “Oh no. So tired of them. Ugh.” A viewer chimed in with, “Why are they still trying to be relevant? They said they want privacy, they want to be left alone. No one cares.”