Approximately 92% of families surveyed by SaverLife, a nonprofit platform that helps people build savings, said the tax-credit payments helped improve their financial stability, with 59% of recipients saying it made a considerable difference in their finances, based on a survey of 801 households conducted in December.

In a separate poll, which consisted of just over 100 families, 49% said the cash allowed them to pay critical utility bills on time.

The expanded Child Tax Credit payments helped families afford basic needs, according to the report, such as purchasing food, staying current with bills, and building savings. Now that the expanded credit has expired, approximately 32% of 801 families said they would have a harder time paying for necessities such as utility bills.

The Child Tax Credit "is really helping families stay afloat," SaverLife Director of Public Policy and Systems Change Radha Seshagiri told Yahoo Finance Live (video above). "And we're also noticing the child tax credit payments are keeping savings balances stable so families have that cushion in case that emergency comes up, which is always around the corner for any of us." 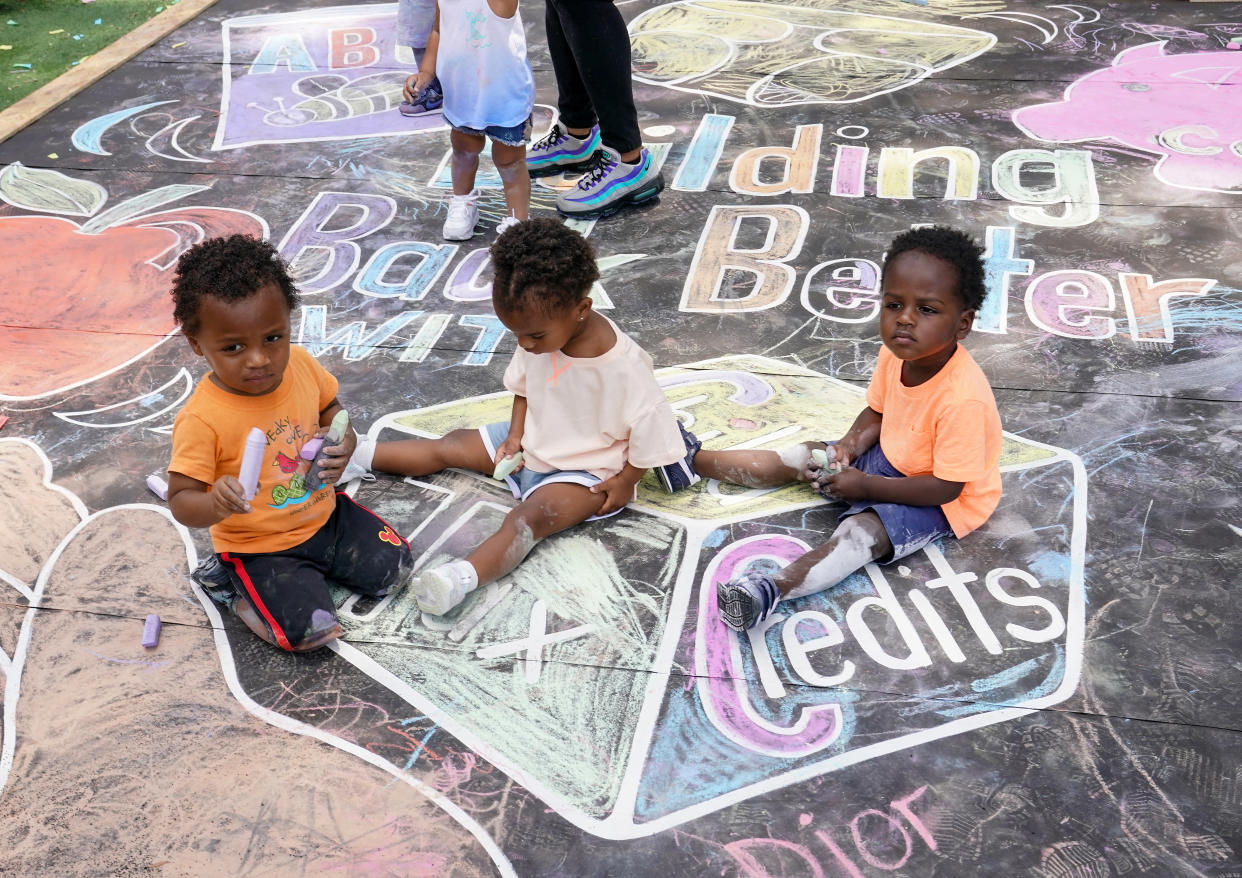 The American Rescue Plan passed in March of last year expanded the Child Tax Credit in three ways. It increased the credit amount from $2,000 per child to $3,000 for each child ages 6 to 17, and $3,600 for those under the age of 6.

It also authorized half of the amount to be distributed in advance each month from July to December 2021. Importantly, it made the credit fully refundable, which allowed families earning little to no income to qualify for the credit, including those in deep poverty. The measure helped lift nearly 4 million children from deep poverty and provided cash assistance to 36 million households with children.

The expanded credit expired at the end of 2021, and Congress did not act to renew it. Many households struggled to make ends meet before the pandemic. Without the boost from the expanded tax credit, they could face even larger financial hurdles due to rising inflation, which has increased the cost of child care, food, housing, and utilities nationwide.

New data from the U.S. Census Bureau’s Household Pulse Survey, which shows how parents used the tax-credit payments, revealed that 39.7% of adults with children had difficulty covering expenses in late January and early February, up from 37.6% entering 2022.

According to SaverLife, 74% of members receiving expanded payments were able to meet their daily needs by December, an increase of 23% compared to July. Additionally, some 49% of respondents said they were more likely to make critical utility bill payments in full and on-time while receiving the monthly tax-credit payments.

“We saw that folks who received the child tax credit payments were able to pay their utility bills in full. And with the rising cost of heating, getting ready for the winter, people were able to literally heat their homes and keep the lights on,” Seshagiri said. “This signals to us that families are able to provide for their children, provide for their families. And the child tax credit is really helping to give that strong start — strong foundation to all families.” 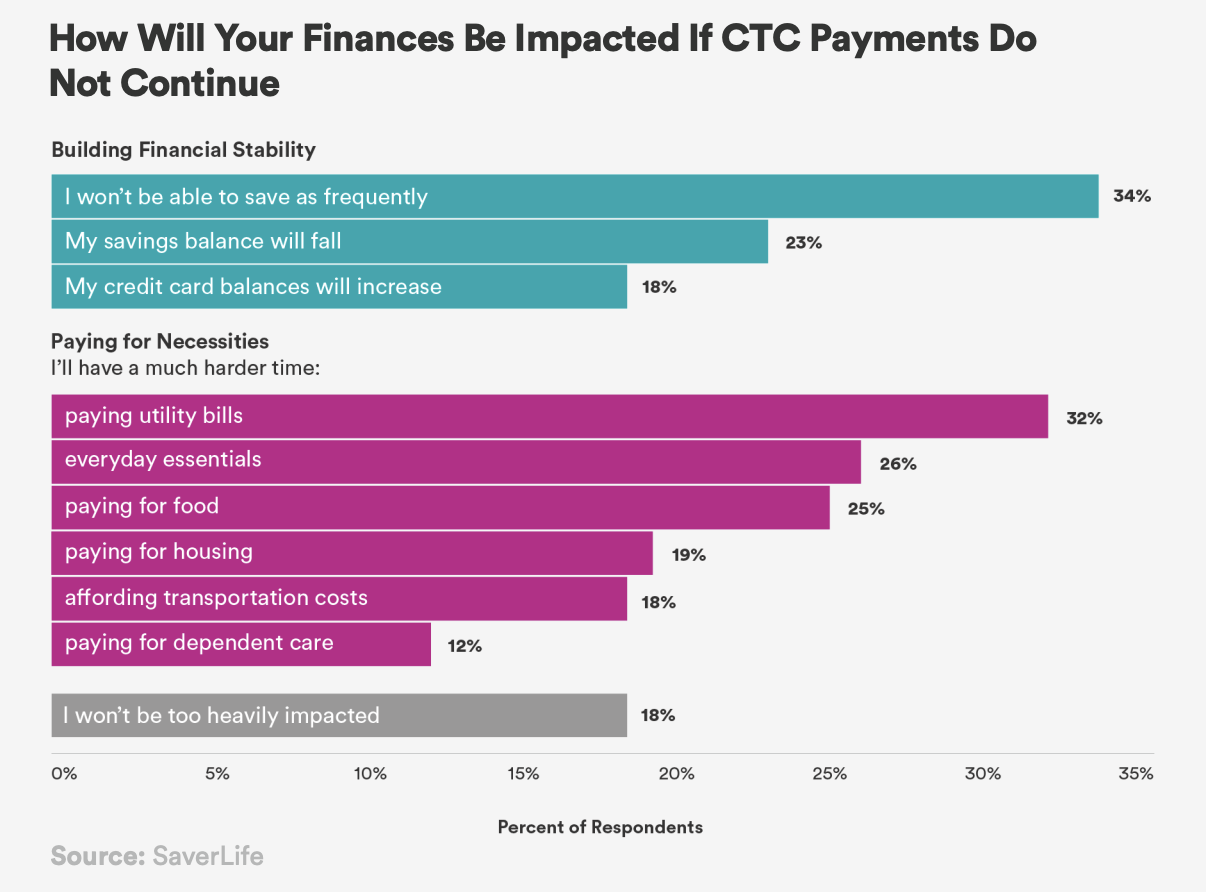 Some families were able to put cash into their savings

According to a SaverLife study, having as little as $250 in your savings account can have a significant impact on helping families avoid debt, pay their utilities on time, and feel less stressed.

Although the majority of households with incomes below $35,000 spent the majority of their credit payments on food, utilities, education, and clothing, approximately 8% of households put some money into their savings accounts, according to the Center on Budget and Policy Priorities analysis of the Census Bureau Household Pulse survey.

Bank data from SaverLife families showed that 24% of Child Tax Credit recipients reduced their savings balances by $100 any given month, relatively unchanged from 2020. This suggests that because of the expanded payments, SaveLife members were able to keep their savings balances largely intact amid rising costs of life.

While parents and guardians can still get the remaining portion of the tax credit during tax season, up to $1,800 per child, rising costs of life may diminish those savings rather quickly, according to Seshagiri.

“It's normally a time when one would receive a tax refund and can put money away toward savings, to revisit finances, to reexamine debt. This year, it's a lot more complicated. The cost of basic needs has gone up. People are driving to work and the cost of gas has gone up. So while many are trying to put away and reexamine their finances at tax time, we know that it's more complicated this year with the child tax credit payments ending,” Seshagiri said.