European vineyards may have to turn a BILLION litres of wine into industrial alcohol amid a huge surplus caused by the coronavirus outbreak, French politician warns

A billion litres of European wine could end up as industrial alcohol as the coronavirus pandemic hits the bottle hard.

French MEP Éric Andrieu, from the winemaking Aude region, has warned that a lack of storage following widespread bar, restaurant and shop closures coupled with a drop in exports has led to more wine than vineyards can cope with.

He said that border closures mean that wine due for export or sale has been left in tanks.

It means there is a shortage in storage for the 2020 harvest, due to be collected in a few months’ time, The Drinks Business reported.

He said: ‘Distillation is an alternative, certainly less remunerative than the sale of wine, but one which will allow wine growers to get by and to be able to also harvest in 2020.’ 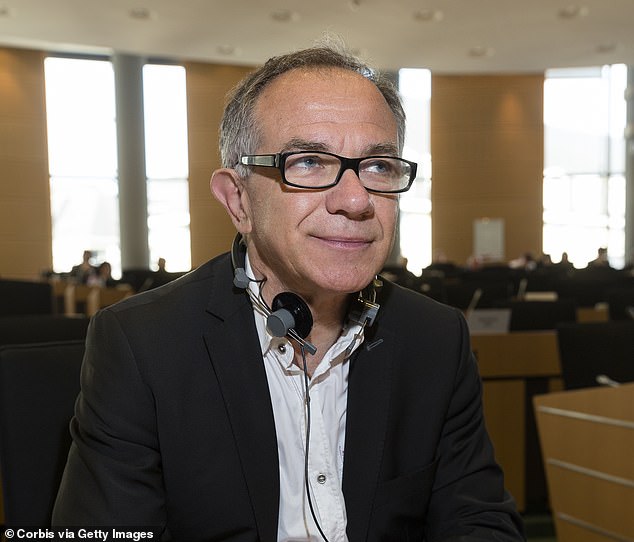 MEP Eric Andrieu, above, said ‘small producers risk going out of business’ if the European Commission does not step in to help the wine industry 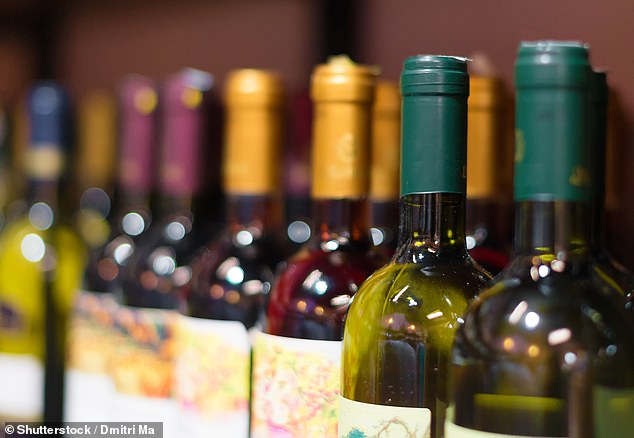 Current rules mean Brussels must authorise requests to distill wine into alcohol. Andrieu said the European Commission should step in because it ‘has the legal and financial tools’ to help the market

Andrieu has now called on the European Commission to step in, and warned the situation could have ‘serious repercussions’ on employment.

‘The European Commission has the legal and financial tools to intervene in the market in times of crisis. If it doesn’t do that now, small producers risk going out of business,’ he told The Times.

There are at least 10 million hectolitres of unsold wine in France, Spain and Italy, he added.

The coronavirus crisis has also caused a 30 per cent fall in volume and 50 per cent drop in value of the EU wine market, a statement from the European wine trade group Comité Européen des Entreprises Vins (CEEV) revealed.

And this week President Macron’s government, with support from Italy and Spain, asked the European Commission to approve a ‘crisis distillation’ programme.

A letter sent to the Commission said: ‘The crisis we are experiencing is unfortunately only the beginning of a long period.

‘The volumes not sold during these months will not only weigh on the market for the coming seasons but, in many regions, will hamper the next harvest due to the lack of storage capacity in the cellars.’ 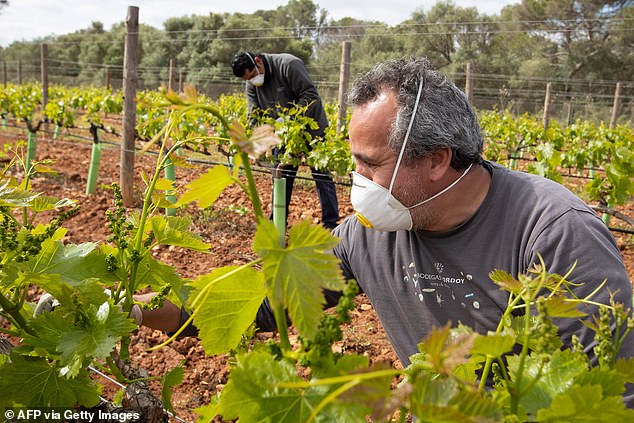 Two men work in a vineyard in Llucmajor on the Spanish island of Mallorca on April 15 2020 amid a national lockdown. Spain, Italy and France have asked the EU to approve a crisis distillation programme

The unsold wine would be used for industrial products to make hand sanitiser, solvents or cosmetics, officials told The Times.

The ‘immediate opening of a European crisis distillation’ was requested for the wine sector, which has been ‘greatly disrupted by this pandemic and on which the economy of entire regions depends’s.

Winemakers are asking for 80 cents in public money for every litre they turn into alcohol. They want more than half – 45 cents – from national governments and the rest from the EU. 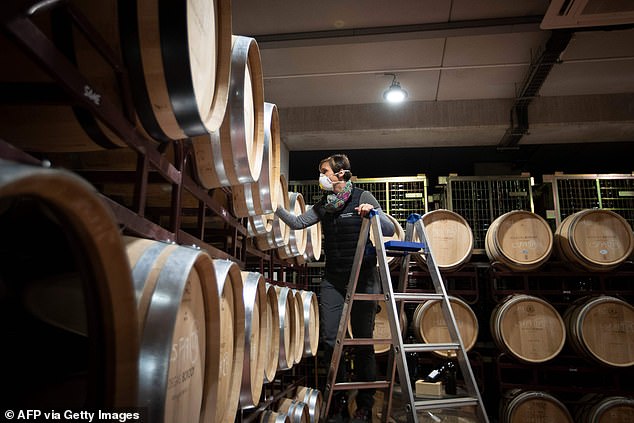 Jean-Marie Barillère, President of CEEV, warned that ‘we should all understand that what we are facing is no short-term crisis. It will take time and require investments to recover wine markets’.

The CEEV stated that all members, which account for over 90 per cent of European wine exports, reported a fall in exports since January.

Barillère added: ‘In the short term, we need to consider that the reduced wine sales and the high level of wine stocks may provoke problems in the normal balance of the wine market.’

The trade group has implemented a Covid-19 ’emergency package’ to mitigate the devastating effects on the industry and bolster company finances. 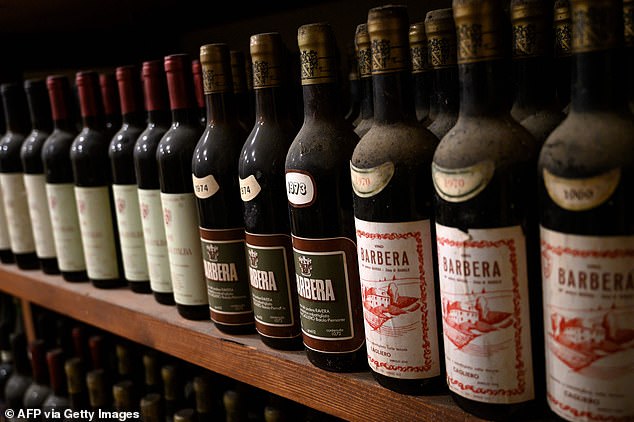 Many producers have also been left with huge quantities of unused bottles in cellars after Donald Trump imposed a 25 per cent tariff on French wine last autumn, resulting in a drop in US exports

They have asked the European Commission to allow for flexibility for promotion programmes, a temporarily reduced VAT on wine products and ‘a modern framework for distance selling’.

It is critical that the wine sector recovers on export markets, they added.

‘A quick resolution of the commercial dispute with the USA is needed as well as further efforts to gain access to other markets,’ Recarte said.

He added that in the future ‘legal adaptations are needed to dynamize the aromatised wine products category and the creation of the non-alcohol and low alcohol wine categories’. 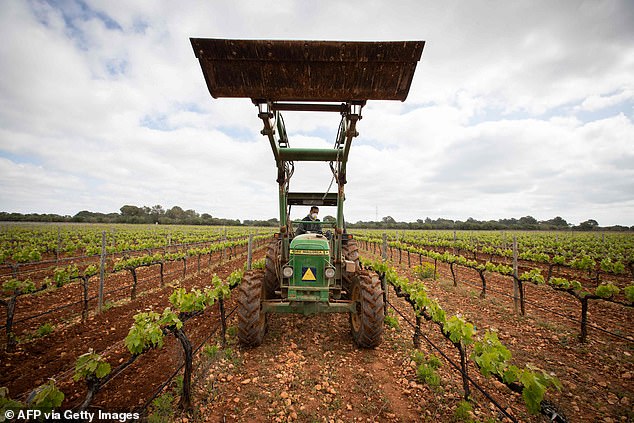 Alexandre They, 48, chairman of the Independent Winemakers’ Federation, said that Brexit had also caused many problems for the industry

Alongside restrictions because of coronavirus, many producers have also been left with huge quantities of unused bottles in cellars after Donald Trump imposed a 25 per cent tariff on French wine last autumn, resulting in a drop in US exports.

Alexandre They, 48, chairman of the Independent Winemakers’ Federation in the Aude said that Brexit had also caused many problems for the industry.

‘A lot of vineyards say their cellars are already full and they simply have nowhere to put this year’s harvest,’ he told The Times.

He told the paper that distillation was a better option, although ‘it will break our hearts’ because ‘Wine involves a year of work and a year of culture and we do not do that to see it turned into alcohol. But there is no other way’.