Thomas Lane, J. Kueng and Tou Thao are scheduled to face trial next March on charges of aiding and abetting second-degree murder and manslaughter. Prosecutors want to add the third charge following an appeals court ruling in February.

The three-judge panel has 90 days to make a ruling. Based on the February opinion and a related ruling in the case of former officer Derek Chauvin, it’s possible the judges could rule in favor of the state and send the case back to the lower court to add the charge.

Floyd, 46, died on May 25, 2020, after Chauvin pinned him to the ground with a knee on his neck as the Black man repeatedly said he couldn’t breathe. Kueng and Lane helped to restrain Floyd — Kueng knelt on Floyd’s back and Lane held down Floyd’s legs. Thao held back bystanders and kept them from intervening during the roughly 9 1/2-minute restraint. 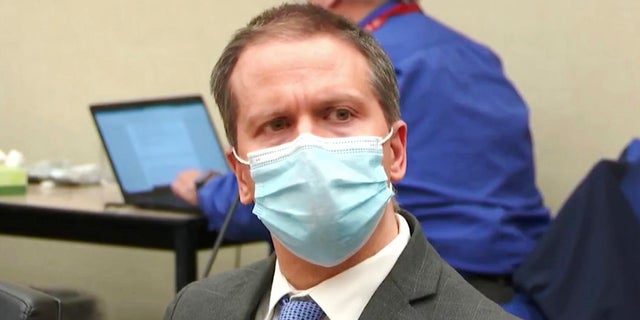 Former Minneapolis police Officer Derek Chauvin listens to guilty verdicts at his trial for the 2020 death of George Floyd at the Hennepin County Courthouse in Minneapolis, Minn. (Court TV via AP, Pool)

The issue of the third-degree murder count has been complicated in this case.

In October, Judge Peter Cahill tossed a third-degree murder charge against Chauvin, saying it could only be sustained if Chauvin’s conduct had been “eminently dangerous to others” and not specifically directed at Floyd.

But in February, a three-judge panel of the Appeals Court opened a window for that charge to be reinstated when it issued a ruling in an unrelated police shooting death. In that case, the court upheld the third-degree murder conviction for former officer Mohamed Noor in the 2017 shooting death of Justine Ruszczyk Damond. The panel ruled that a third-degree murder conviction can be sustained even if the action that caused a death was directed at a single person.

That led prosecutors to seek the reinstatement of the third-degree murder charge against Chauvin, and add a count of aiding and abetting third-degree murder for the other officers. Cahill denied both requests, and prosecutors appealed. The Appeals Court then ruled that the Noor opinion set binding precedent, even though it remains before the state Supreme Court. Cahill reinstated the charge against Chauvin.

Prosecutors say the other former officers should now be charged with aiding and abetting third-degree murder.

“This Court routinely follows its precedents from their date of publication unless and until the Minnesota Supreme Court reverses them,” prosecutors said in written arguments. To allow courts to flout these decisions “invites chaos because it would allow courts to eschew precedent based on their own preferred reading of the law. … And it threatens to undermine public faith in the judicial process and the rule of law.”

Defense attorneys argued that third-degree murder is an unintentional act and relies on a defendant’s reckless state of mind, but aiding and abetting must be intentional.

Prosecutors said that argument is without merit.