Our live coverage of the coronavirus pandemic is free for all registered readers. Please also consider supporting our journalism with a subscription.

The Governor of Kharkiv says that Ukrainian forces have prevailed in their battle against the Russians.

There was also street-to-street fighting.

A short time ago Oleh Sinegubov said in a message on Facebook and Telegram that “control over Kharkiv is completely ours.”

“Russia’s enemy is completely demoralised. Directly in Kharkiv, throwing enemy vehicles in the middle of the road,” he said.

I’ve just spoken to an Israeli official who says that Prime Minister Naftali Bennett spoke to Russia’s Vladimir Putin around two hours ago.

This comes amid speculation that Israel, which has good relations with Russia and Ukraine, could play negotiator in any peace talks. 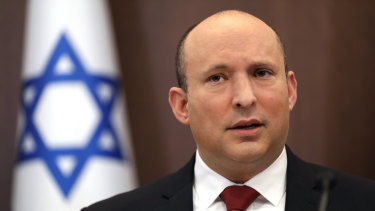 “The Prime Minister expressed his concern about the situation in Ukraine and the possibility that the fighting would intensify and lead to greater humanitarian damage,” the Israeli source said.

“President Putin noted that he is ready for negotiations. Prime Minister Bennett said that Israel is ready to assist as much as required and at any time in order to help resolve the crisis and bringing the parties closer.

“This is due to Israel’s special status and good relations with all parties. The two leaders agreed to maintain continuous contact between Russia and Israel.”

A couple of things worth noting here: Israel’s critique of Putin’s actions has been far more muted than its Western allies. This is because Israel depends on Russia to help it control events in Syria and prevent Iran’s influence in the region from reaching Israel through its eastern border.

However, Ukraine’s President Volodymyr Zelensky is one of just a few Jewish world leaders and his family, on his grandfather’s side, were murdered in the Holocaust.

There have also been protests in Israel in support of Ukraine.

Kyiv, the capital remains under Ukrainian control and there has been intense fighting in the city of Kharkiv.

Ukraine has filed a lawsuit against Russia in the International Court of Justice and called for Russia’s veto at the United Nations Security Council to be cancelled.

And Ukraine’s Defence Chief has called on all foreign fighters to go to Ukraine to help them fight.