Massive dire wolves prowl through the icy north of Westeros, in George R.R. Martin’s epic Game of Thrones. The near mythical creatures are the Stark family sigil in the epic saga, with five orphaned pups becoming deeply bonded with Ned Stark’s five children.

It’s the stuff of legends – but hundreds of thousands of years before becoming a pop culture icon, dire wolves were formidable ice age predators. Twice the size of a German shepherd, with teeth specialised for tearing meat, they hunted bison, horses and harnessed enough pack power to bring down a gigantic mastodon. For hundreds of thousands of years they prowled the land mass between Bolivia and Canada as a dominant species until around 13,000 years ago when they became extinct toward the end of an ice age. 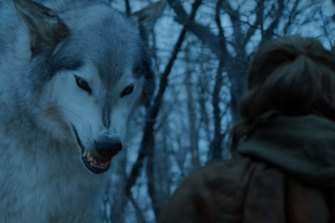 One of the fictional dire wolves featured in Game of Thrones.

Research published on Wednesday in the journal Nature challenges existing knowledge about the dire wolf and offers answers to the puzzling question of why this apex predator died out when other smaller American Pleistocene era wolves and coyotes survived to modern day.

"While ancient humans and Neanderthals appear to have interbred, as do modern grey wolves and coyotes, the genetic data suggests that dire wolves did not interbreed with any living canine species," Dr Mitchell said.

By not interbreeding over millions of years they evolved into their own genus – aenocyon dirus meaning "terrible wolf". However, being the lone wolves on the canine family tree is what probably led to the extinction of these regal creatures. 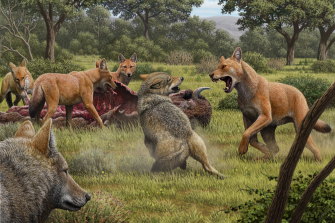 An artist’s impression of a dire wolf attacking a grey wolf.Credit:Mauricio Antón, Nature

Chief scientist at the Australian Museum Kristofer Helgen, co-author of the research at the University of Adelaide and a self-professed Game of Thrones fan, explained that the lack of genetic mingling with other canines might have hindered dire wolves from adapting to a changing planet as the earth moved out of an ice age.

"The new understanding in biology is that one way for species to change with the times is to adapt and evolve within their own genome," said Professor Helgen. "The other way to adapt is to borrow genes through interbreeding. Species without close relatives don’t have that opportunity."

An international team of 49 researchers collaborated to sequence, for the first time, the ancient DNA of dire wolf sub-fossils from North America, some fossils dating to over 50,000 years old. Sequencing analysis and state-of-the-art molecular biology methods enabled DNA to be recovered from the highly degraded remains.

In Game of Thrones, the Stark family motto warns that "Winter is coming". Given the new research on dire wolves, perhaps the bigger threat to this apex predator was an approaching, long-term summer.