Washington: The Biden administration is planning to propose a ban on menthol cigarettes, a long-sought public health goal of civil rights and anti-tobacco groups that has been beaten back by the tobacco industry for years, according to a federal health official.

For decades, menthol cigarettes have been marketed aggressively to black people in the United States. About 85 per cent of black smokers use menthol brands, including Newport and Kool, according to the Food and Drug Administration. Research shows menthol cigarettes are easier to become addicted to and harder to quit than plain tobacco products. 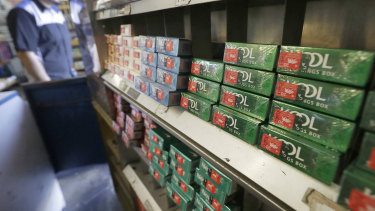 Packs of menthol cigarettes at a store in San Francisco. California. Credit:AP

The FDA is being forced to act by a court deadline — a federal district judge in Northern California had ordered the agency to respond by April 29 to a citizens’ petition to ban menthol. But the odds are unlikely that a ban would take effect anytime soon, because any proposal is likely to wind up in a protracted court battle. The proposal would also include a ban on all mass-produced flavoured cigars, including cigarillos, which have become popular with teenagers.

The ban would not, however, apply to e-cigarettes, which are being considered as a means to help smokers of regular menthol cigarettes quit. Most e-cigarette brands, including Juul, are undergoing an FDA review that will determine whether they are sufficiently beneficial to public health to be allowed to stay on the market.

Delmonte Jefferson, executive director of the Centre for Black Health and Equity, one of the organisations behind the petition, called the decision a victory for African Americans and all people of colour.

“This has been a long time coming,” said Jefferson. “We’ve been fighting this fight, since back in the 1980s. We told the industry then, we didn’t want those cigarettes in our communities.” 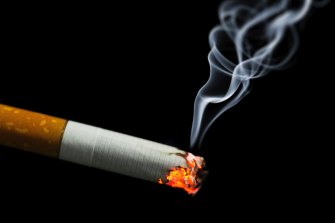 Steven Callahan, a spokesperson for Altria, which owns Philip Morris USA, said the company remained opposed to a menthol ban.

“We share the common goal of moving adult smokers from cigarettes to potentially less harmful alternatives, but prohibition does not work,” Callahan said. “A far better approach is to support the establishment of a marketplace of FDA-authorised non-combustible alternatives that are attractive to adult smokers.”

Pressure to resurrect a ban had been building since President Joe Biden’s election, and as the coronavirus pandemic and the Black Lives Matter movement further exposed sharp racial disparities in the country’s public health and medical systems.

While black smokers smoke less, they die of heart attacks, strokes and other causes linked to tobacco use at higher rates than white smokers do, according to federal health statistics.

Matthew L. Myers, president of Campaign for Tobacco-Free Kids, which was part of the citizens’ petition, also noted that menthol and other flavours appeal widely to teenagers.

“Menthol cigarettes are the No. 1 cause of youth smoking in the United States,” he said. “Eliminating menthol cigarettes and flavoured cigars used by so many kids will do more in the long run to reduce tobacco-related disease than any action the federal government has ever taken.”

Menthol is a substance found in mint plants, and it can also be synthesised in a lab. It creates a cooling sensation in tobacco products and masks the harshness of the smoke, making it more tolerable. Decades ago, marketing research showed it was more appealing to black smokers than white smokers, and cigarette companies began to focus their marketing on black consumers.