BREAKING NEWS: Biden accuses Putin of GENOCIDE in Ukraine while talking about Americans’ pain at the pumps and says 70% of price rises are because of his invasion in Ukraine

President Joe Biden on Tuesday accused Vladimir Putin of committing ‘genocide’ in the Ukraine afer his administration officials have been careful not to use that word.

‘Your family budget, your ability to fill up your tank – none of it should hinge on whether a dictator declares war and commits genocide a half a world away,’ Biden said during a speech in Iowa on combatting high inflation.

On April 4, shortly after pictures of atrocities appeared in Bucha, Ukraine, Biden refused to call it a genocide, instead using the term ‘war crimes’ and saying Putin should be put on trial.

‘He is a war criminal,’ Biden said at the time. ‘But we have to gather the information. We have to continue to provide Ukraine with the weapons they need to continue to fight and we have to get all the detail so this could be – actual have a war crimes trial. This guy is brutal and what’s happening in Bucha is outrageous and everyone’s seen it.’

Ukraine President Volodymyr Zelensky called the Russian actions ‘genocide’ during his visit to Bucha to see the mass graves and bodies in the streets.

‘This is genocide. The elimination of the whole nation and the people,’ Zelensky said.

Ukrainian officials said the bodies of 410 civilians, many with bound hands and close-range gunshot wounds, were recovered from towns surrounding Kyiv after the withdrawal of Russian troops. 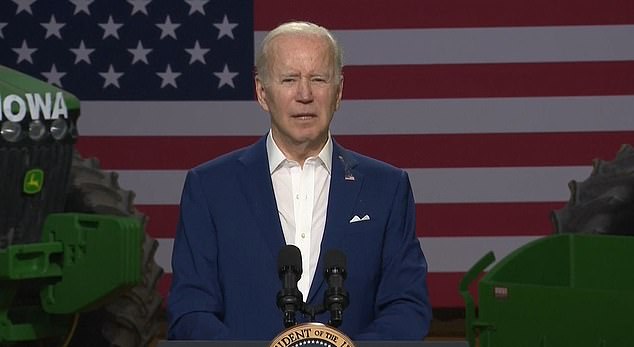 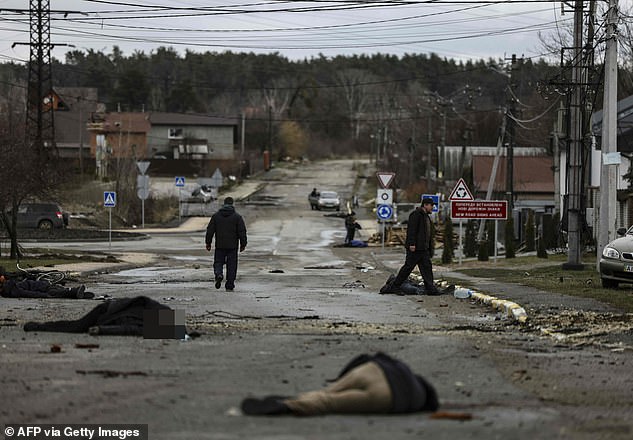 Dead bodies litter the streets near Bucha, a suburb of the Ukrainian capital Kyiv, after Russian forces withdrew from the region in early April 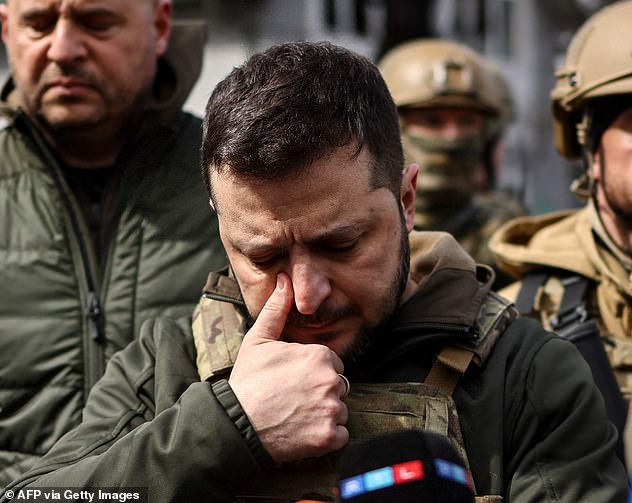 A visibly emotional Volodymyr Zelensky stood motionless as he surveyed the scene in Bucha, with dozens of bodies shot at close range laying on the empty streets

Biden was in Iowa to the high inflation crippling consumers and kick off an administration-wide tour touting the infrastructure benefits coming to rural communities.

His visit came the same day inflation in the United States hit a 41-year high of 8.5 percent, as soaring gasoline, food and housing costs slam consumers in the pocket books.

In his remarks, Biden, as he and his staff have done many times in the past, blamed the record high prices for food and fuel on Putin and his invasion of the Ukraine.

‘His invasion of Ukraine has driven up gas prices and food prices all over the world,’ Biden said of the Russian president, calling the high prices the ‘Putin price hike.’

‘We saw today’s inflation data 70% of the increase in prices in March came from Putin’s price hike in gasoline,’ he said.

The latest data showed the price of basic necessities rising sharply, with groceries up 10 percent from a year ago, rent rising 4.4 percent, clothing up 6.8 percent, and energy costs rising 32 percent. 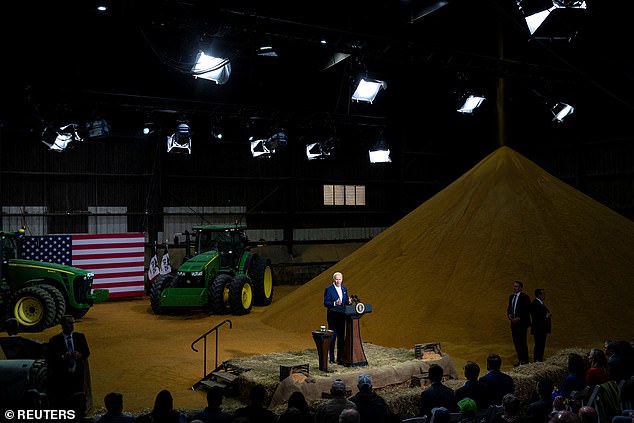 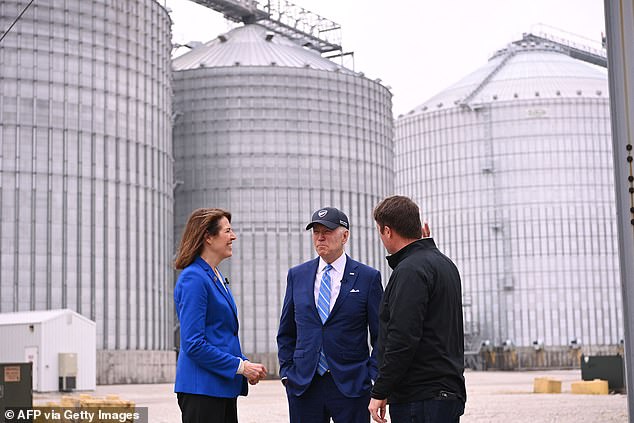 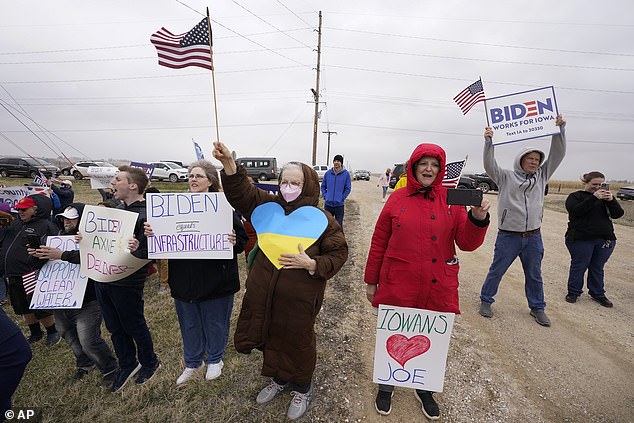 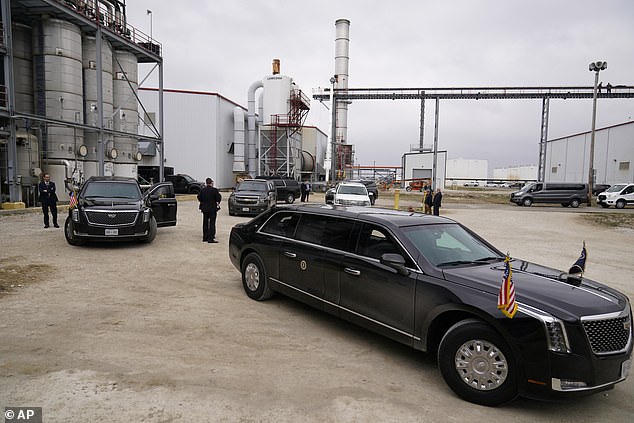 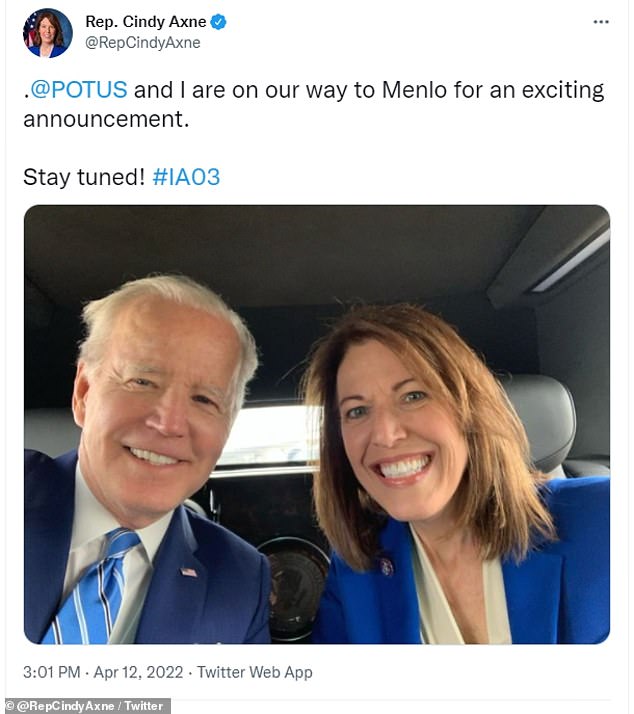 Biden’s approval ratings have tanked, in large part because of voters’ unhappiness with the economy.

As part of the fight against inflation, on his visit Biden announced he’ll suspend a federal rule preventing the sale of higher ethanol blend gasoline this summer, as his administration tries to bring down prices at the pump.

Most gasoline is blended with 10% ethanol. The Environmental Protection Agency will issue an emergency waiver to allow widespread sale of 15% ethanol blend that is usually prohibited between June 1 and Sept. 15 because of concerns that it adds to smog in high temperatures.

Biden announced the move at a biofuel company in Menlo, west of Des Moines. Iowa is the country’s largest producer of corn, key to producing ethanol. He toured the plant with Democratic Rep. Cindy Axne.

The White House argues the move will save drivers an average of 10 cents per gallon throughout the Midwest and the South.

‘For working families – families eager to travel and visit their loved ones – that will add up to real savings,’ according to a fact sheet released by the White House.

In addition, housing costs, which make up about a third of the consumer price index, have escalated, a trend that seems unlikely to reverse anytime soon as landlords try to claw back losses sustained during the pandemic.

According to AAA, the average price of a gallon of gasoline on Tuesday – $4.10 – is up 43 percent from a year ago, though it has fallen off record highs in the past couple of weeks.

The March inflation numbers are the first the capture the full surge in gasoline prices that followed Russia’s invasion of Ukraine on February 24. 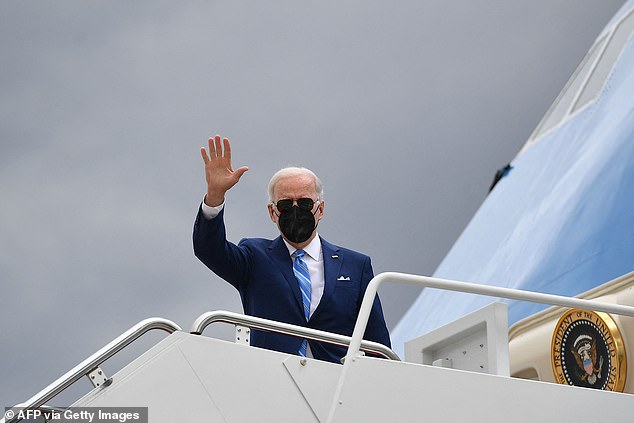 President Joe Biden heads to Iowa, where he addressed the high inflation crippling consumers and kicked off an administration-wide tour touting the infrastructure benefits coming to rural communities 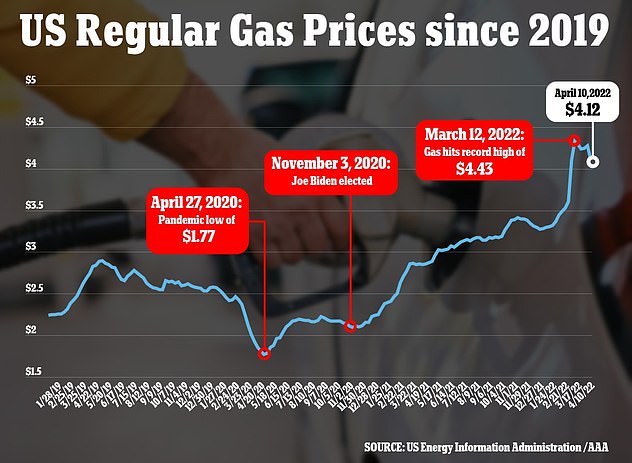 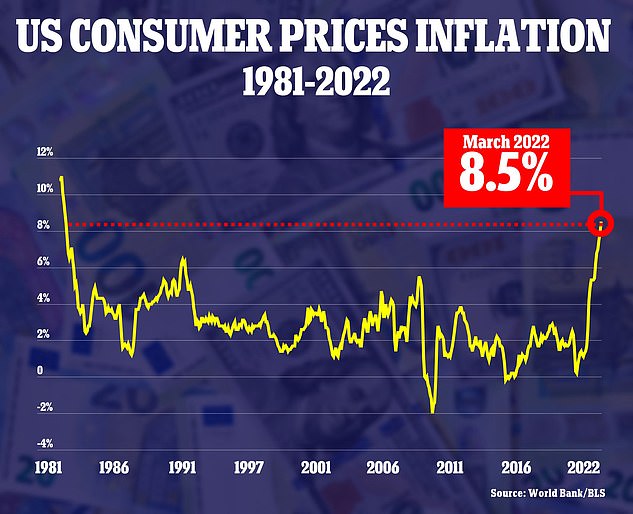 The consumer price index increased 8.5% in March from a year ago, a 41-year high

The trip to Iowa was Biden’s first as president. During the 2020 presidential, his campaign had a fourth-place finish in the first-in-the-nation caucuses, which suffered some technical glitches. Donald Trump won the state by 8 points in the presidential election.

Additionally, the administration will spend the coming weeks pushing billions of dollars in funding for rural areas.

Cabinet members and other senior officials will travel the country to help communities get access to money available as part of the bipartisan infrastructure law.

‘Meembers of my administration will be visiting rural America in over 25 states over the next three weeks to talk about how we can do even more great jobs and opportunity to make sure that investments we’re making reach rural communities,’ Biden said.

The White House said the trips are not about politics.