A multinational company that secured a $121 million contract to support asylum seekers in Papua New Guinea boosted its profits by billing the Australian government $75 an hour for local workers it paid just $8.

One former local worker described the practice as “like stealing” from PNG nationals and the Australian taxpayer. 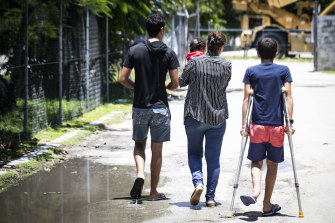 Refugees on Nauru in 2018.Credit:AP

Company records show that Spanish-owned Applus Wokman, which in 2017 won the contract to provide case management and resettlement support for hundreds of asylum seekers, paid local workers as little as 10 per cent of the wages it claimed from the Department of Home Affairs.

The revelation, along with the huge profits made by Brisbane-based company Canstruct for running Nauru’s asylum-seeker processing centre, raise fresh questions about the cost and accountability of Australia’s outsourcing of offshore processing to private companies.

Canstruct, awarded a lucrative contract without undergoing an open and competitive tender process, has made at least 11 political donations to the Coalition in the past three years.

The Age and Sydney Morning Herald have obtained commercial-in-confidence extracts from Applus Wokman’s contract with Home Affairs, including its monthly invoices and individual worker payslips which detail its billing and payment practices.

Invoices from December 2019 show it billed the department $1.3 million for labour and a further $1.1 million for “corporate overheads” such as rental on a Port Moresby office, water and electricity.

Payslips supplied by several workers for the same month show they were paid about $8 an hour – close to the average hourly wage in PNG – for their services as case-management officers and auditors who supported hundreds of men released from the Manus detention centre in 2017 to live in the community.

The men were not allowed to leave PNG unless they were resettled in the US or another country.

The company charged Australian taxpayers between $55 and $75 an hour for the same workers in a move permitted under the terms of its contract but which former workers say was exploitative.

In February last year, then auditor at Applus Wokman, Samuel Kelly, raised the gulf in wages claimed compared with wages paid with Home Affairs on behalf of about 30 local staff.

“[Applus] pays us at a very low rate and when it comes to billing DHA (Home Affairs) at month end, where it bills using the actual rates in the contract. This is more like stealing from the Australian government as well as us the nationals,” Mr Kelly wrote in an email on behalf of the affected workers.

“When we found out about this, we felt that we were being cheated on, exploited and used for the company’s benefits. Looking at this, the company has made millions at the expense of us the dedicated nationals.“

Mr Kelly told The Age and Sydney Morning Herald that the company sacked him and 10 other workers after the payment issue was raised with the Australian government in February 2020. 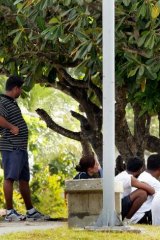 Applus’s contract with Home Affairs to provide services on Manus has been repeatedly extended, with the company recently earning $3.7 million a month.

The contract is due to expire in June. There are 131 asylum seekers and refugees remaining in PNG.

The Age and the Sydney Morning Herald can also reveal that the government of Nauru was furious after learning that Brisbane firm Canstruct was to be awarded an offshore services contract without undergoing an open and competitive tender process.

That effectively denied the Pacific island nation the chance to compete to provide the same services.

A confidential letter from high-ranking Nauruan official Barina Waqa to Home Affairs Deputy Commissioner Mandy Newton dated July 2017 describes how Nauru was “deeply offended” over “the disregard with which you and your senior officials have met our request for a leading role in managing the RPC [regional processing centre] service provision”.

Ms Waqa, who is Nauru’s secretary for multicultural affairs and previously served as deputy secretary of Justice and Border Control, wrote that Nauru believed the decision to hand the contract to Canstruct had “damaged the sense of partnership and collaboration” between the two countries.

“I would like to formally record the Republic of Nauru’s objection to the information … [that the Australian government] will be pursuing a sole tender arrangement with Canstruct.”

Canstruct has been paid $1.4 billion over five years to run Nauru’s offshore processing scheme and last financial year pocketed a net profit up to $100 million, according to corporate filings.

While media reporting has linked Canstruct to two political donations, federal and Queensland records reviewed by The Age and the Sydney Morning Herald reveal 11 political contributions to the Liberal National Party in Queensland made by company executives or closely linked corporate entities.

The donations total at least $47,500 and were made between October 2017 and July 2020. Queensland’s most senior federal government member is Peter Dutton, who was until recently home affairs minister.

There is no suggestion the donations were made by Canstruct to influence contractual dealings with the federal government.

Canstruct, which did not respond to questions, has previously dismissed any link between donations and its contracts.

In a statement, the Department of Home Affairs said it “considers value for money has been achieved under the Applus PNG and Canstruct contracts, noting price is not the only factor when assessing value for money”.

It said Applus had assured the department it was complying with PNG labour laws and that the department was “currently undertaking an open procurement to replace existing contracts … in Nauru”.

The federal opposition has this year repeatedly pressed the department for information on how Canstruct is being paid so much money given the dwindling numbers of asylum seekers and refugees on Nauru.

Just 109 people are recorded as being part of the offshore scheme in Nauru, a drop in numbers caused partly by a resettlement deal with the United States.