Following its tango with Hurricane Fiona, it will take several months to restore critical infrastructure brought down by the storm to parts of Canada.

The hurricane, which made its way up the East Coast last week, brought devastation and ruin to areas of Newfoundland and Nova Scotia, leaving behind an ‘unprecedented’ trail of destruction, according to Canadian officials.

One 73-year old woman died after being swept out to sea by waves caused by the storm. The coast guard and local rescuers recovered her body from the ocean on Sunday afternoon.

The woman was from Port aux Basques, a town on the southwest tip of Newfoundland with about 4,000 residents, which was hit particularly hard by the storm.

Fiona previously claimed seven lives as it ripped through the Caribbean and Puerto Rico.

Brian Button, the mayor of Port aux Basques, described the town as ‘like a complete war zone.’

‘Some people have lost everything, and I mean everything,’ Button told CBC News. ‘The sea was taking back the land and we were getting separated. A lot of our homes are built along the coastline along the Atlantic Ocean. Down there, Fiona just wiped out parts of that.’

More than 20 homes were destroyed leaving 200 people in search of shelter as the cost of damage stretches into the millions.

It’s ‘going to be months rebuilding. I think months is a conservative estimate for some of these people,’ one resident told the Canadian Broadcasting Corp. 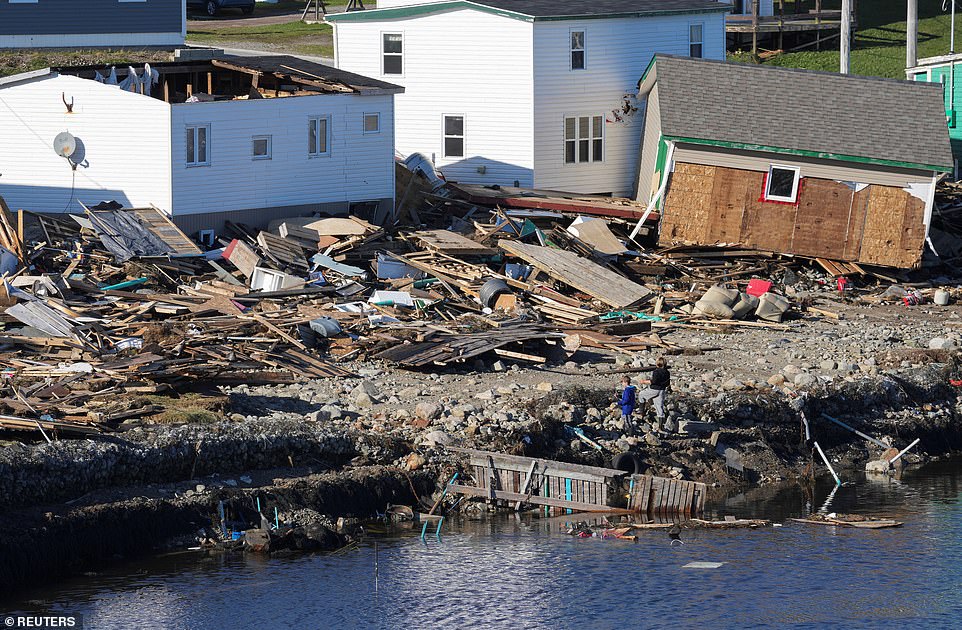 Children play along the shoreline next to damaged buildings in the aftermath of Hurricane Fiona in Port Aux Basques, Newfoundland, Canada September 25, 2022 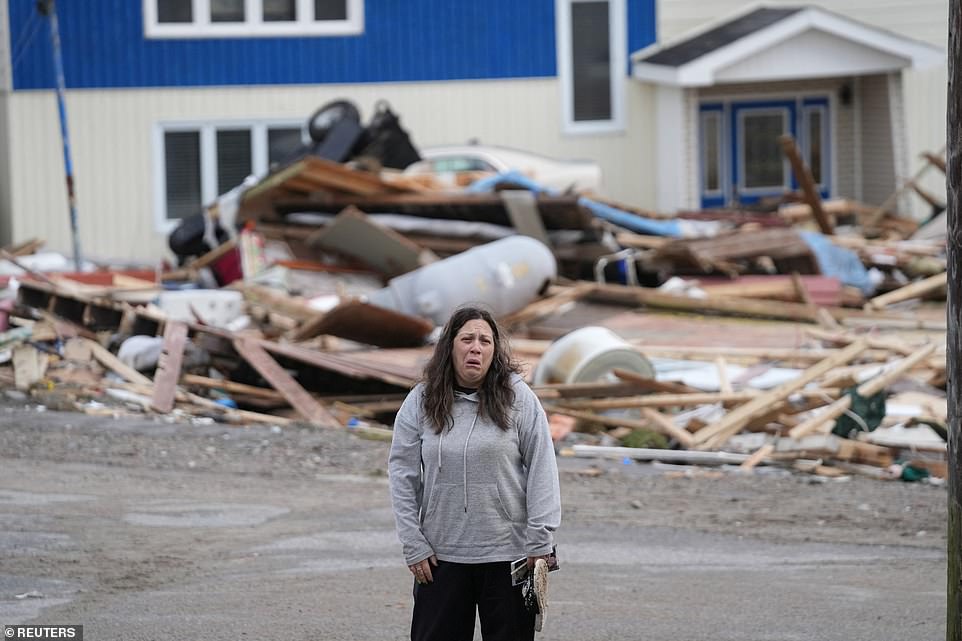 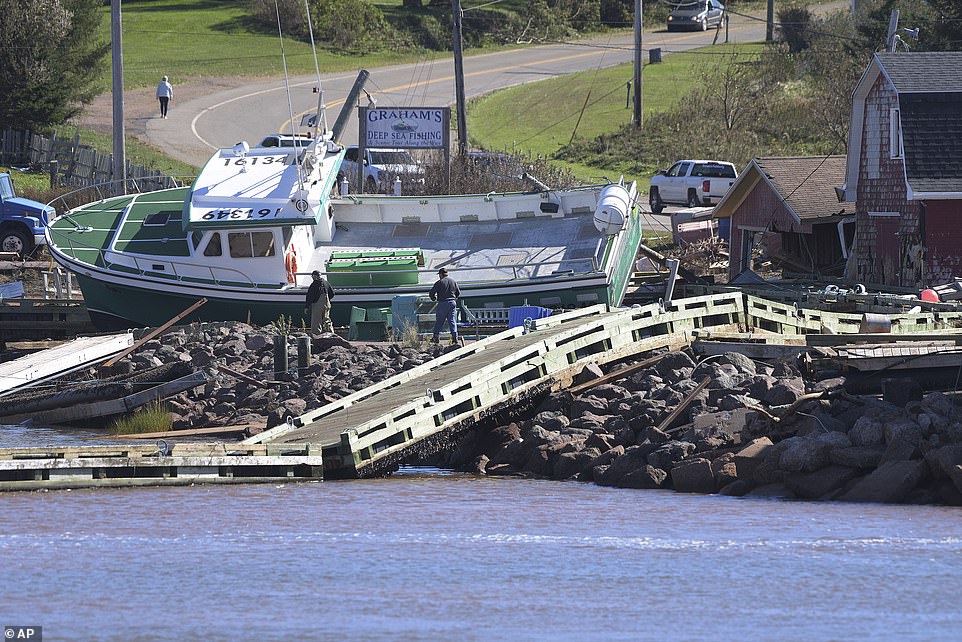 A lobster boat is seen grounded on the rocks at the wharf in Stanley Bridge, Prince Edward Island, Sunday Sept. 25, 2022 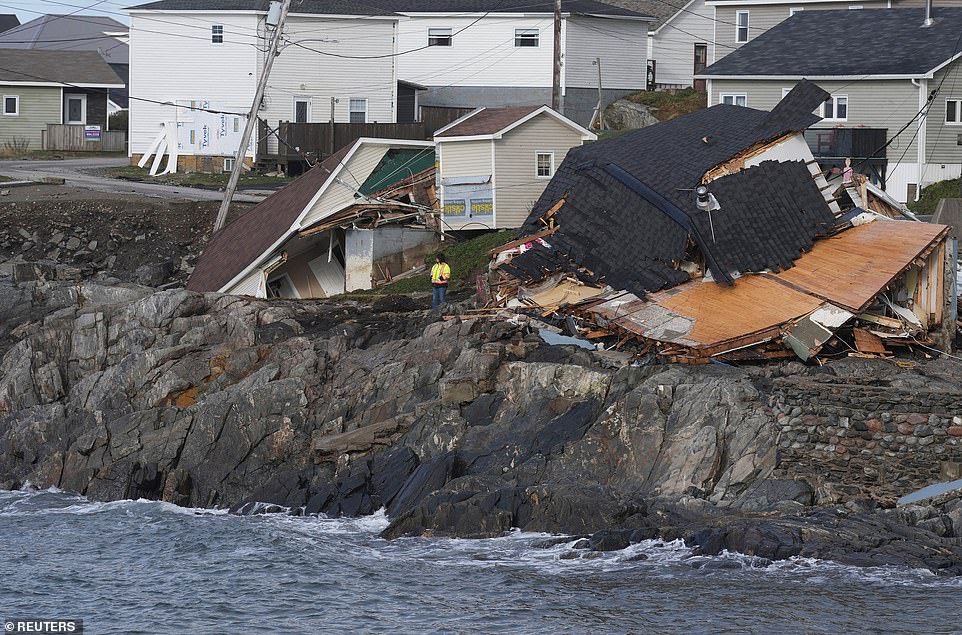 A person looks towards the sea after the arrival of Hurricane Fiona in Port Aux Basques, Newfoundland, Canada September 25, 2022 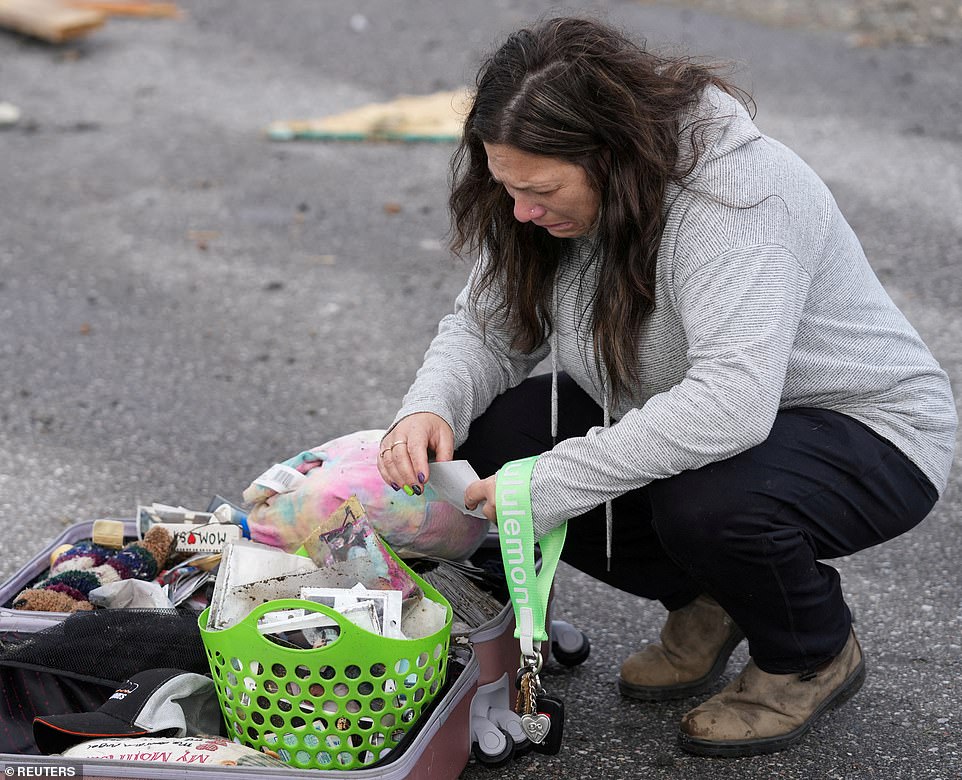 Osmond searches through her belongings in the aftermath of Fiona

Fiona slammed into eastern Canada on Sunday after days of rain and high winds. Its initial impact included winds that reached up to 106 miles per hour. A storm surge of more than six feet hit Prince Edward Island.

Homes, businesses and boats along the shore line were swallowed whole by the storm.

‘The scale of what we’re dealing with, I think it’s unprecedented,’ said Bill Blair, the country’s Emergency Preparedness Minister

The full scale of the storm’s damage is not yet clear, but the Canadian federal government has dispatched its armed forces to help clear fallen trees and other storm debris. The effort will hopefully allow crews to get into the area and restore power.

On Sunday, hundreds of thousands of Canadians remained without power in the east. Crews from across the country and the United States were dispatched to assist.

In some areas, residents have lined up to fill gas cans to the brim as they wait for emergency crews to restore their homes’ access to power.

Officials have warned it will likely be weeks before essential services are totally restored. 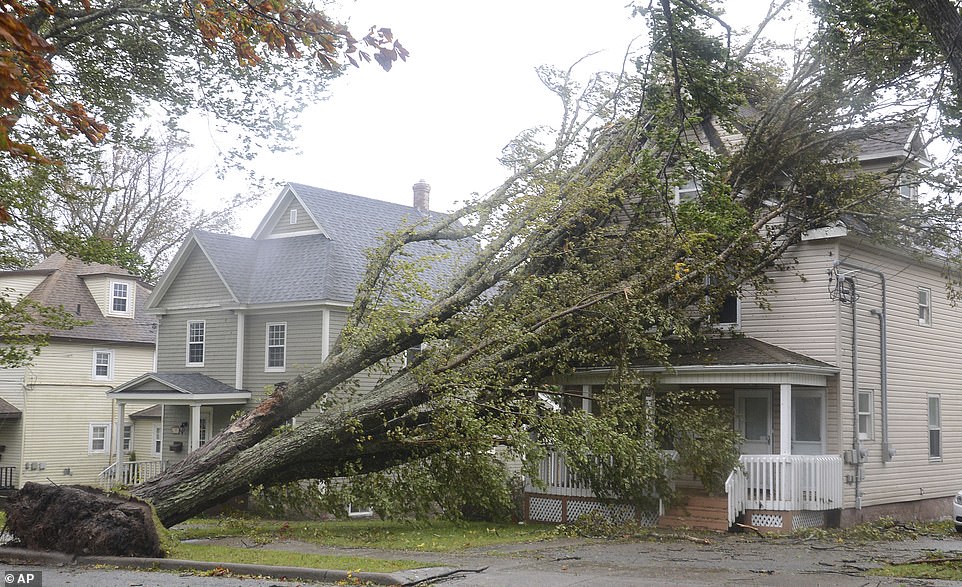 Fallen trees lean against a home in Sydney, Nova Scotia in the aftermath of Fiona

Hit particularly hard by the storm, was Canada’s $3.2 billion lobster industry. Chances look slim that boats and harbors will be fully restored by the time the season begins in several weeks.

Dominic LeBlanc, the minister of intergovernmental affairs, said, ‘Those fishers have a very immediate need to be able to access their livelihood once the storm passes.’

On Monday, Prime Minister Justin Trudeau met with local hydro workers in the capital on their way to the east coast to support the recovery effort.

Hurricanes in Canada are somewhat rare, in part because once the storms reach colder waters, they lose their main source of energy. But post-tropical cyclones still can have hurricane-strength winds, although they have a cold core and no visible eye. 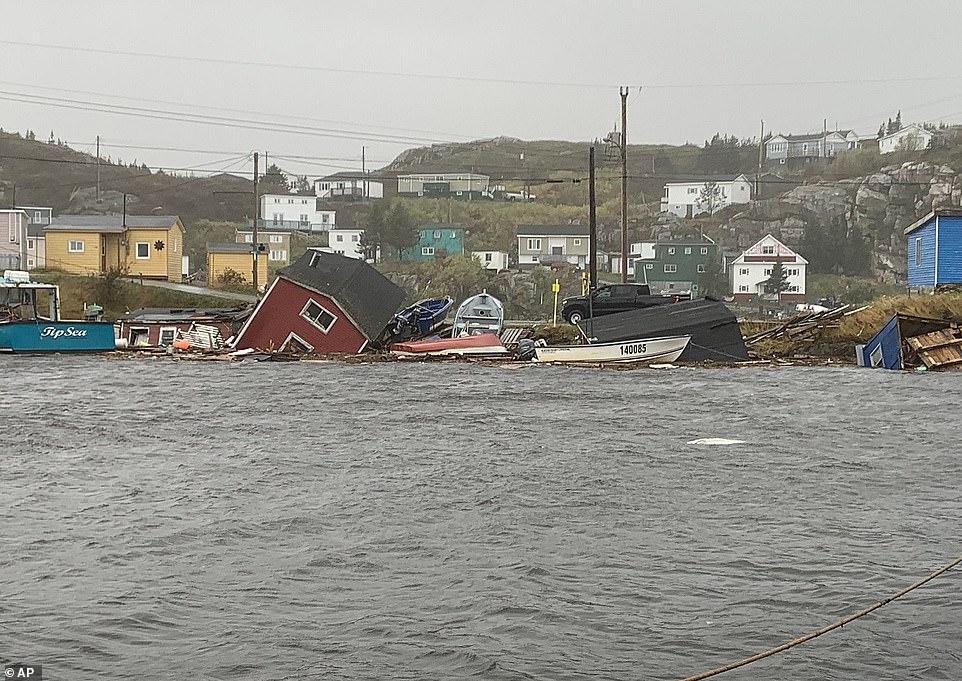 Sheds and boats become subterranean in the wake of the hurricane, which caused 300,000 Canadians to lose power 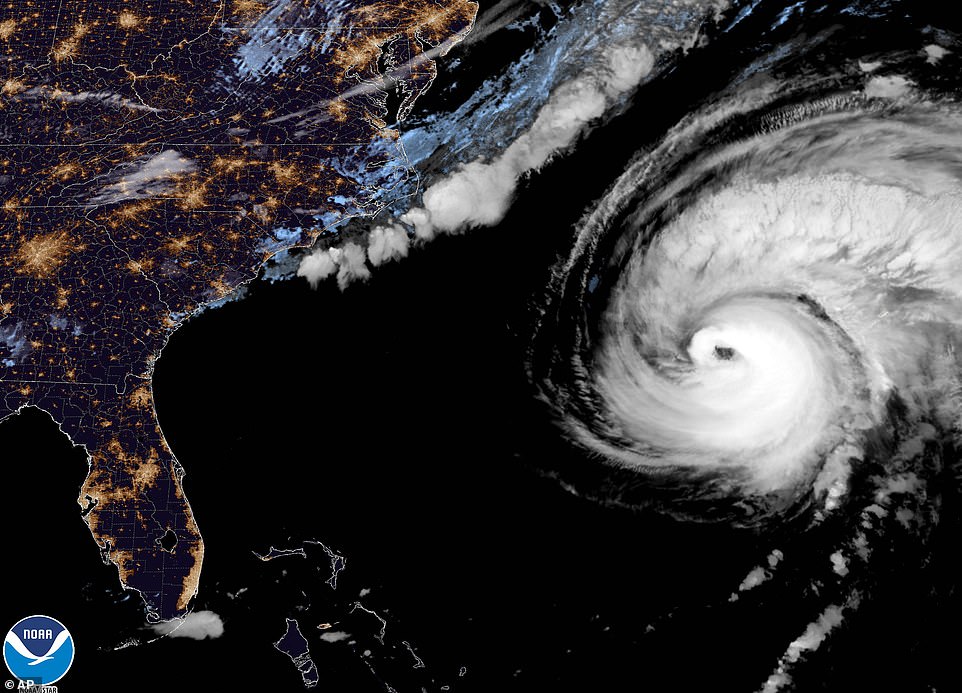 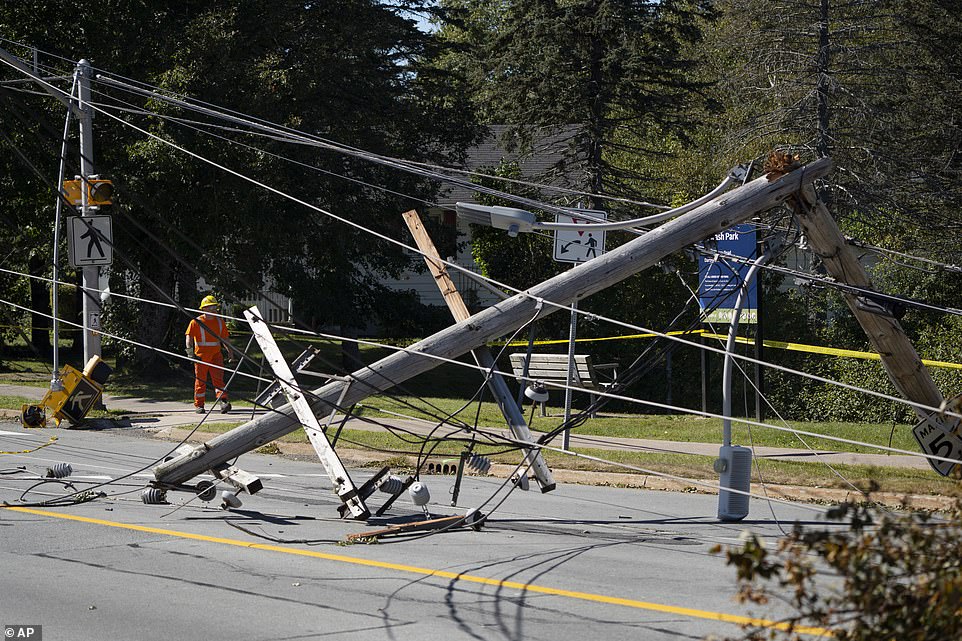 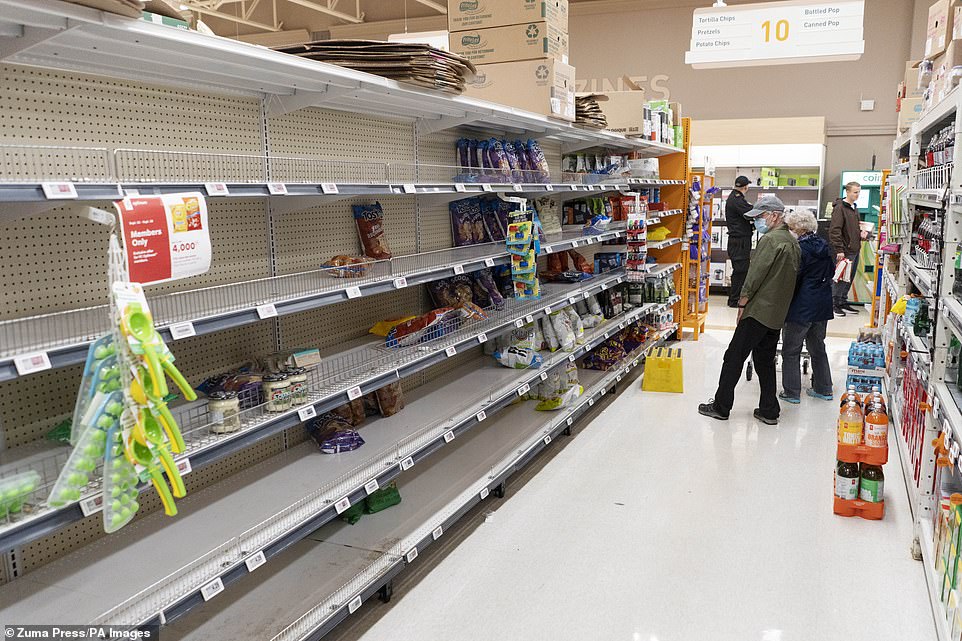 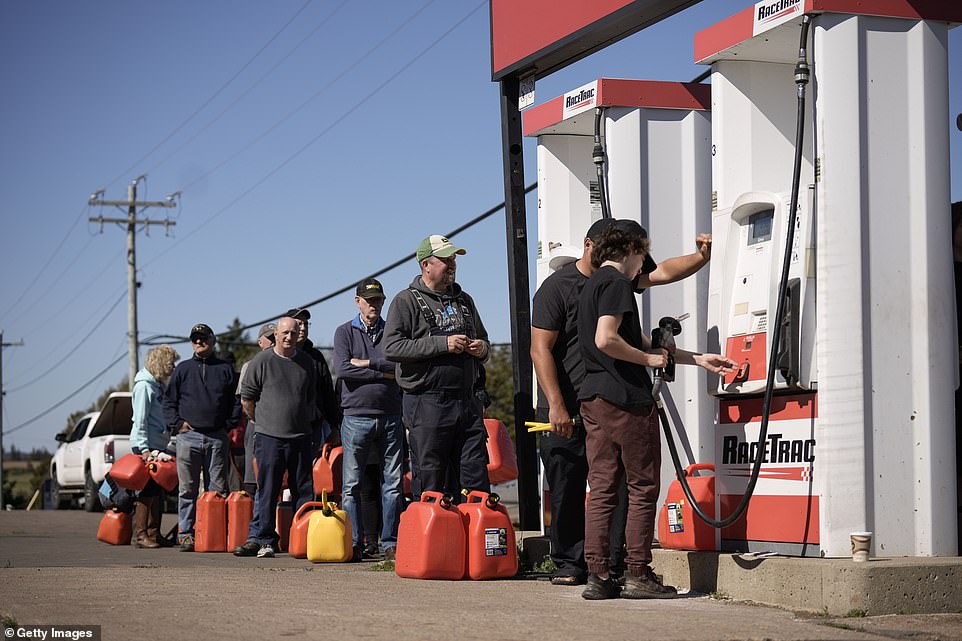 Residents of Prince Edward Island fill up gas cans a day after Fiona hit, leaving many of them without power