Rishi Sunak became an unlikely star of the BBC’s Big Night In fundraising special as he announced the Government’s pledge to match every donation raised tonight.

The Chancellor, speaking from his Downing Street home, told viewers that we would remember how ‘we came together as a country’ in the fight against the coronavirus.

He announced that the Government would be matching donations like-for-like, with the first £20 million going to the National Emergencies Trust. 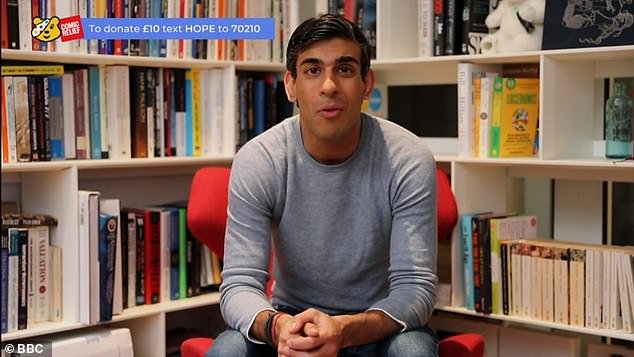 ‘Hi everyone, I know these are difficult times,’ said Mr Sunak. ‘Look we’re all worried, worried about our health, our friends our family.

‘But I also think we will look back and remember that at this time of crisis that we came together as a country.

‘We were there for each other and that’s what the Big Night In is all about, I am so grateful to everyone who has donated tonight and don’t forget that the government has pledged to match every pound you donate so please do give generously. 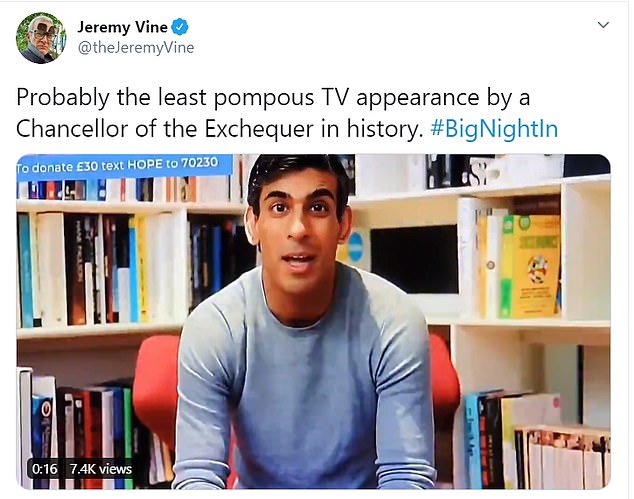 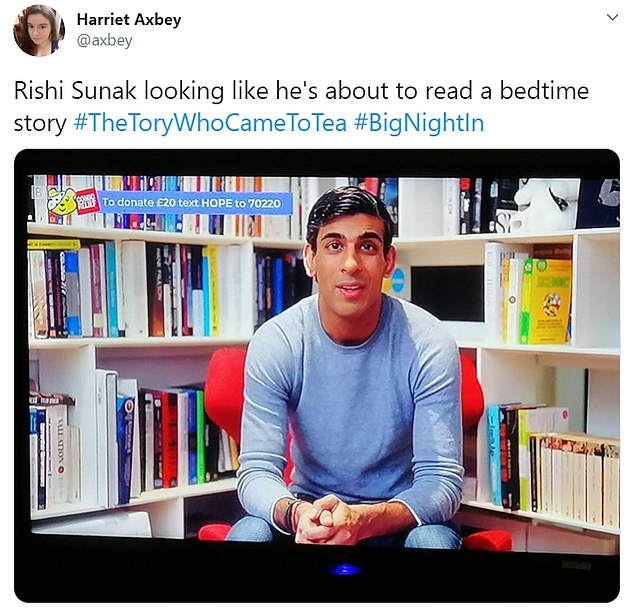 Viewers were quick to praise the Treasury boss for the short appearance, notably wearing a casual pair of jeans and a top rather than the ‘politician’s’ suit.

Stephen Canning added: ‘B****y good look having Rishi Sunak on the Big Night In dressed like his normal self, rather than a politician, and pledging to match the funds.’

Mr Sunak has been seen as a potential future Prime Minister after being parachuted in to the position of Chancellor after predecessor Sajid Javid quit rather than fire his own staff.

An exclusive poll for The Mail on Sunday found that he was the choice of voters to run the country if Boris Johnson became too ill, taken before the PM went into St Thomas’ ICU earlier this month.

While Foreign Secretary Dominic Raab has taken the reins while Mr Johnson is incapacitated, the Deltapoll survey shows that Mr Sunak – dubbed ‘dishy Rishi’ by his Treasury colleagues – is backed as a stand-in premier by more than three times as many voters.

The government have confirmed they will match pound for pound ‘everything’ raised on the night.

The first £20million of the matched money will go to the National Emergencies Trust that was launched by the Duke of Cambridge to help people all across the UK affected by the pandemic.

All matched funding after this amount will go to Children In and Comic Relief.