Fears have arisen that Beijing could punish ‘everyone on the planet’ with its national security law in Hong Kong with an alarming clause targeting people who are outside of China.

But Article 38 of the controversial law is said to punish foreigners who support independence for Hong Kong, stoking fears of the Communist country seeking to expand its influence beyond the borders.

It comes as Hong Kong police have made their first arrest under the landmark law imposed by Chinese government, giving Beijing draconian powers to punish dissent in the city. 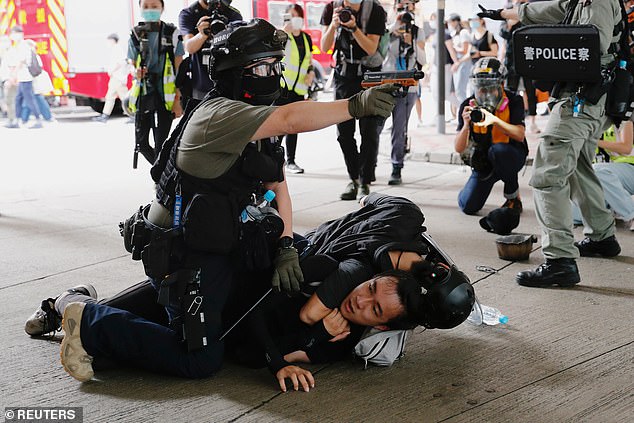 Fears have sparked that China could punish ‘everyone on the planet’ with its national security law with an alarming clause targeting people who are not residents of Hong Kong. Pictured, a police officer raises his pepper spray handgun as he detains a man in Hong Kong Wednesday 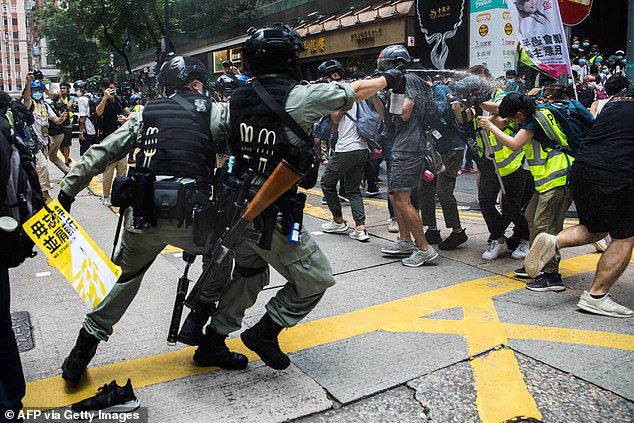 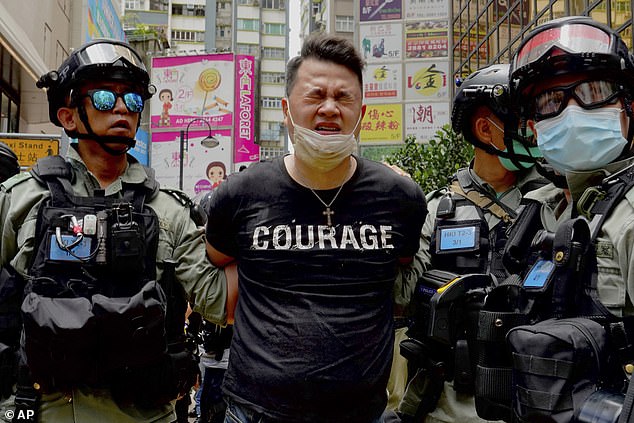 Despite most of the rules applying to Hong Kong citizens, a shocking rule appears to target what critics describe as ‘everyone on the planet.’ Police detain a protester after spraying pepper spray during a protest in Causeway Bay before the annual handover march

Despite most of the rules applying to Hong Kong citizens, a shocking rule appears to target what critics describe as ‘everyone on the planet.’

According to Article 38 of the draconian legislation, it ‘shall apply to offences against the Hong Kong Special Administrative Region under this law committed from outside the region by a person who is not a permanent resident of the region.’

This means that foreigners who support independence for Hong Kong or call for imposing sanctions on the Chinese government could be prosecuted upon entering Hong Kong or mainland China, even if they are not residents of the city.

Critics of China – including Hong Kong’s large diaspora – may face legal risks if they enter or return to the city as non-Hong Kong residents can be prosecuted for their acts conducted outside of the region, according to the clause.

Pro-democracy supporters around the world reacted to the shocking clause targeting foreign citizens with horror.

Johnny Patterson, Director of Hong Kong Watch told MailOnline: ‘Given that the US Congress unanimously passed a bill sanctioning Hong Kong human rights abusers, presumably this law now means all of Congress could hypothetically face prosecution if they go to Hong Kong.

‘The broad application of Article 38 to anyone, anywhere is absurd.

‘But the real victims of this legislation are Hong Kong’s people. It smashes the firewall between Hong Kong and China, and is a serious blow to human rights.’ 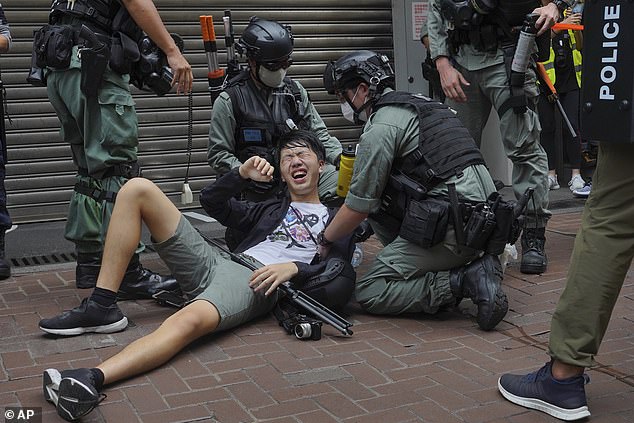 Pro-democracy supporters around the world reacted to the shocking clause targeting foreign citizens with horror. A reporter is seen falling down after being sprayed with pepper spray by police during a protest in Causeway Bay during the annual handover march in Hong Kong 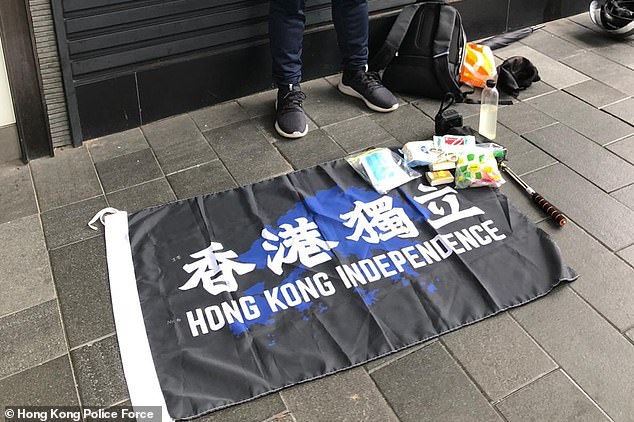 The law, imposed by China after last year’s anti-government protests in the semi-autonomous city, took effect on Tuesday at 11pm. A man with a ‘Hong Kong Independence’ flag (pictured today) was the first to be arrested in Causeway Bay hours after the law came into force

‘[The law] is simultaneously extraordinarily broad and vague,’ Sophine Richardson, China director at Human Rights Watch, said to MailOnline, ‘so much so that the wording of particular clauses does not matter much.

‘It gives the authorities to do whatever they want—charge anyone for almost anything; have a jury or a trial by judge; hold trials in public or in secret; use Hong Kong law or mainland law. National security laws are meant to be necessary and proportionate. This one is the absolute opposite.’

International critics have also expressed their outrage on social media.

Peter Lewis, presenter of Radio Television Hong Kong, commented: ‘President Xi Jinping now thinks he can spread Chinese law around the world and it even applies to acts undertaken outside of #China by people who aren’t residents of HK.’

A man with a ‘Hong Kong Independence’ flag was arrested in Causeway Bay hours after the law came into force and 23 years to the day since Britain returned the former colony to China – with the city’s cherished freedoms now in doubt.

China rammed the law through its rubber-stamp parliament and kept the wording shrouded in secrecy, but finally revealed details last night – unveiling strict new measures which could see Hong Kong protesters repressed on the mainland.

The law, imposed by China after last year’s anti-government protests in the semi-autonomous city, took effect on Tuesday at 11pm.

The law makes secessionist, subversive or terrorist activities illegal, as well as foreign intervention in the city’s internal affairs.

Any person taking part in secessionist activities, such as shouting slogans or holding up banners and flags calling for independence, is in violation of the law regardless of whether violence is used.

The most serious offenders, such as those deemed to be organising the crimes, could receive a maximum punishment of life imprisonment. Lesser offenders could receive jail terms of up to three years, short-term detention or restriction.

‘This decision was necessary and timely to maintain Hong Kong’s stability,’ Carrie Lam said following a flag-raising ceremony and the playing of China’s national anthem.

A pro-democracy political party, the League of Social Democrats, organised a protest march during the flag-raising ceremony. About a dozen participants chanted slogans echoing demands from protesters last year for political reform and an investigation into accusation of police abuse.

The law further blurs the distinction between the legal systems of semi-autonomous Hong Kong, which maintained aspects of British law after the 1997 handover, and the mainland’s authoritarian Communist Party system.

Critics say it effectively ends the ‘one country, two systems’ framework under which Hong Kong was promised a high degree of autonomy.

The law directly targets some of the actions of anti-government protesters last year, which included attacks on government offices and police stations, damage to subway stations, and the shutdown of the city’s international airport.

Acts of vandalism against government facilities or public transit can be prosecuted as subversion or terrorism, while anyone taking part in activities deemed as secessionist would also be in violation of the new law. 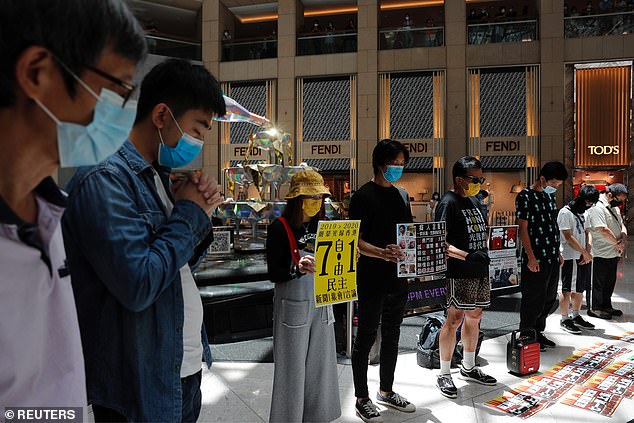 Critics say it effectively ends the ‘one country, two systems’ framework under which Hong Kong was promised a high degree of autonomy. Hong Kong independence protesters gathered in a mall in the city Tuesday to observe a minute of silence after the security bill was passed 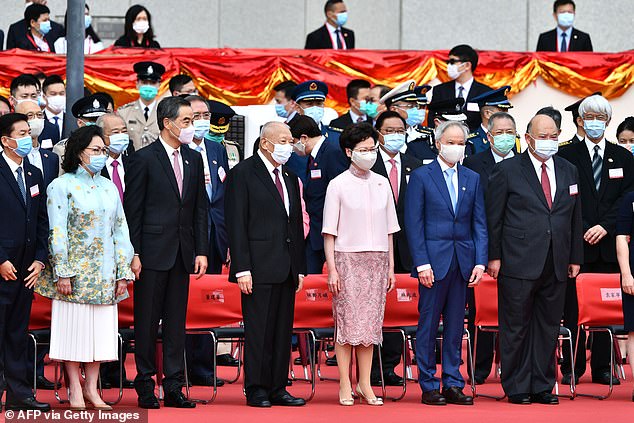 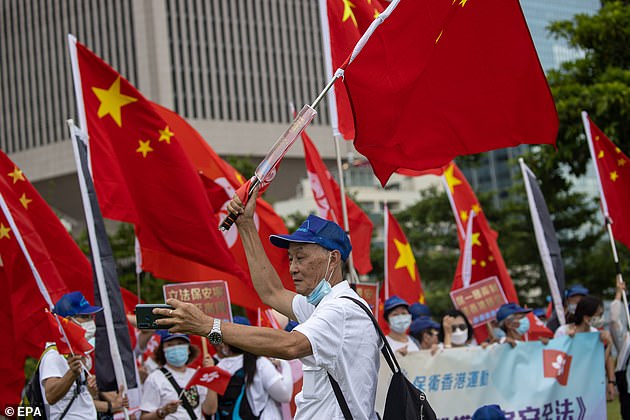 Acts of vandalism against government facilities or public transit can be prosecuted as subversion or terrorism under the draconian security law. A pro-China supporter takes a selfie at a rally in Hong Kong today as news filtered out that the new security law had been passed

Hong Kong’s police had issued a statement saying they would consider as illegal any flag or banner raised by protesters deemed to be promoting Hong Kong’s separation from China or expressing support for independence for Tibet, Xinjiang and the self-governing island democracy of Taiwan that China claims as its own.

Concerns have also been raised over the fate of key opposition figures, some of whom have already been charged for taking part in protests, as well as the disqualification of candidates for the Legislative Council elections scheduled for September.

Schools, social groups, media outlets, websites and others will be monitored and their national security status will be raised, according to the law’s text, while Beijing will have authority over the activities of foreign non-governmental organisations and media outlets in Hong Kong.

The legislation was mandated under Hong Kong’s local constitution but an earlier attempt to pass it in the city’s legislative body in 2003 was shelved in the face of massive public opposition.

Having lost patience, Beijing finally decided to circumvent the Hong Kong legislature and have it passed on Tuesday by the Standing Committee of the National People’s Congress, China’s rubber-stamp parliament.

President Xi Jinping signed a presidential order putting the law into effect and it has been added to the Basic Law, Hong Kong’s constitution.