Covid-19 deaths drop to ANOTHER low in England and Wales with just 192 victims in most recent week of data — but virus fatalities are RISING in the South West and South East, official figures reveal

Covid-19 deaths have dropped to yet another low across England and Wales — but fatalities are rising in the South West and South East, according to official statistics.

Just 192 coronavirus deaths occurred in the week ending July 17 compared with more than 8,000 during the peak of the crisis in April, the Office for National Statistics (ONS) revealed today.

It is the seventeenth week in a row the number of confirmed or suspected Covid-19 deaths has fallen and it means up to five times as many people are now dying of flu or pneumonia each week.

Fatalities have decreased or remained the same in every English region except for the South East and South West, which have suffered an increase in deaths of 57 and 11 per cent in a week, respectively.

But the number of fatalities is still very small overall. For example, the number of people succumbing to the illness rose from seven to 11 in the South West, home to Britain’s stay-cation hotspots of Devon and Cornwall.

Deaths from all causes are below average for the fifth week in a row, which may be because fewer people are now dying of heart disease and dementia because they were already killed by the coronavirus.

In total some 51,366 people have had Covid-19 written on their death certificate during the pandemic in England and Wales, with the majority of deaths recorded in March and April.

The toll is higher than the Government tally of 45,759 which only includes victims who died after testing positive for the coronavirus. 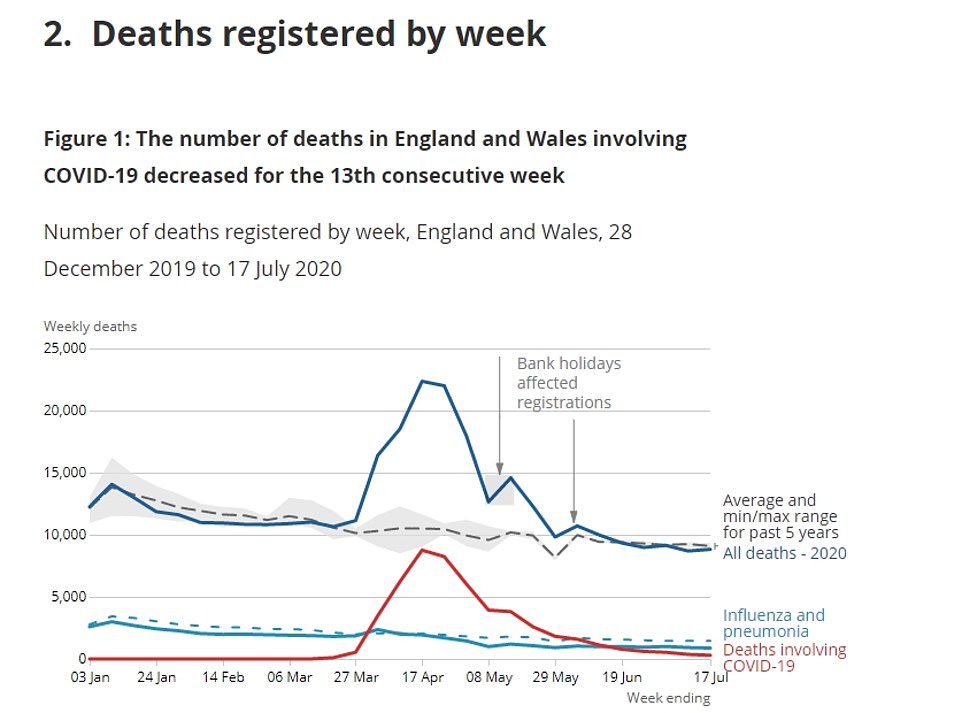 Covid-19 deaths dropped to another low across England and Wales since the lockdown. Figures show nearly five times as many people are now dying from the flu and pneumonia than coronavirus 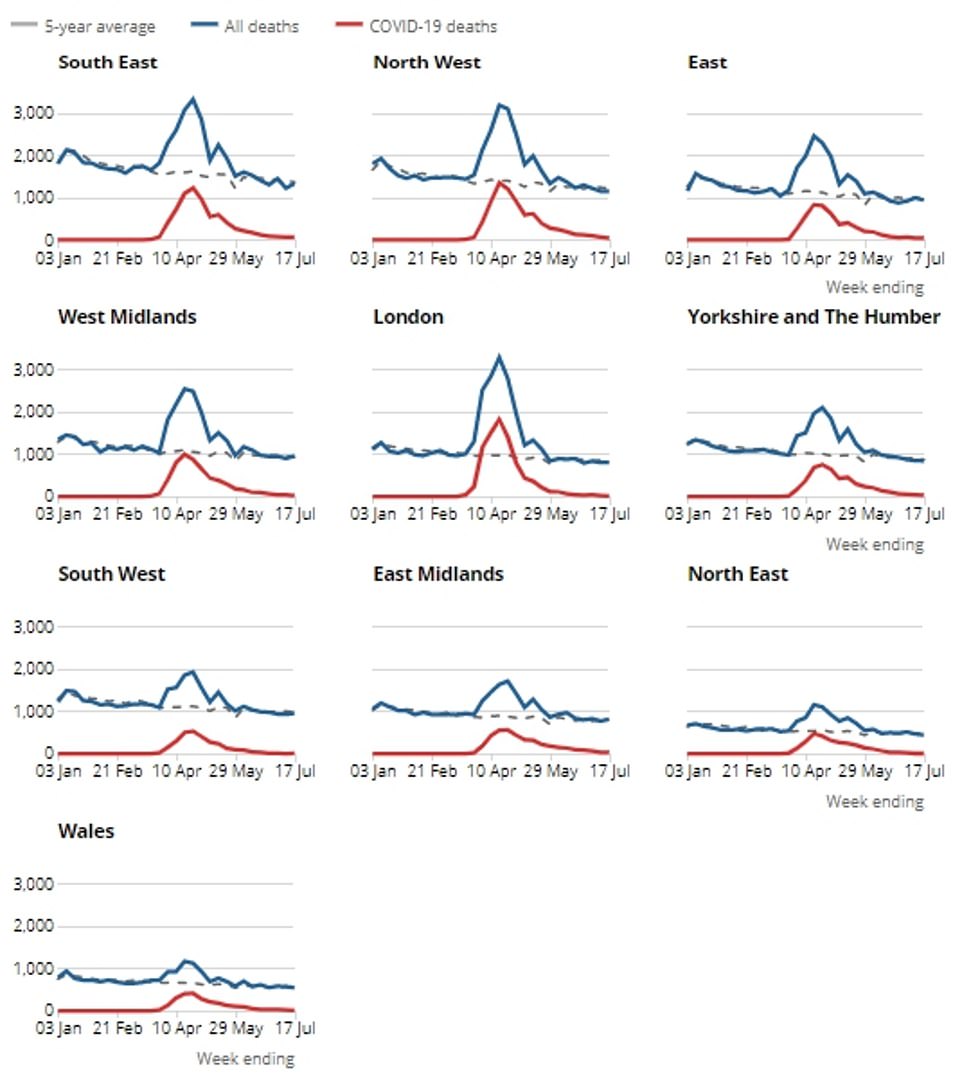 While Covid-19 deaths decreased or remained the same across all English regions, the South East and South West have seen an increase of 57 and 11 per cent, respectively, in one week 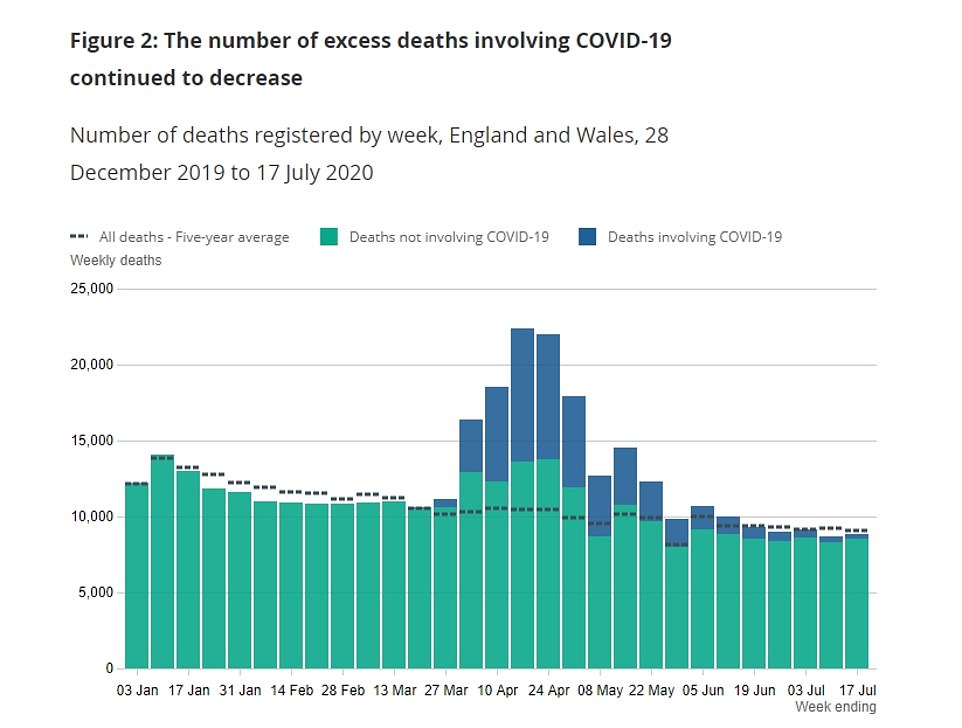 The daily data does not represent how many Covid-19 patients died within the last 24 hours — it is only how many fatalities have been reported and registered with the authorities.

It also only takes into account patients who tested positive for the virus, as opposed to deaths suspected to be down to the coronavirus.

Data compiled by the statistical bodies of each of the home nations show 56,483 people died of either confirmed or suspected Covid-19 across the UK by the end of May.

The Office for National Statistics yesterday confirmed that 51,366 people in England and Wales died with confirmed or suspected Covid-19 by July 17.

National Records Scotland — which collects statistics north of the border — said 4,193 people had died across the country by July 19.

Their tallies are always 10 days behind the Department of Health (DH) because they wait until as many fatalities as possible for each date have been counted, to avoid having to revise their statistics.

The total number of excess deaths has now passed 65,000.

Excess deaths are considered to be an accurate measure of the number of people killed by the pandemic because they include a broader spectrum of victims.

As well as including people who may have died with Covid-19 without ever being tested, the data also shows how many more people died because their medical treatment was postponed, for example, or who didn’t or couldn’t get to hospital when they were seriously ill.

There were a total of 295 Covid-19 deaths registered in England and Wales in the week to July 17. Of these, 192 actually occurred that week, while others happened in the weeks before.

‘Registered deaths’ relate to when they are recorded as opposed to when they occurred, and are the lowest since the week ending March 20, when 103 were registered.

They have dropped by almost a fifth (19.4 per cent) in one week and for the 17th consecutive week.

ONS revealed Covid-19 accounted for just 3.3 per cent of the all deaths over England and Wales registered that week, which compares to the 16.4 per cent caused by the flu or pneumonia.

At the height of the pandemic, in the week ending April 17, 8,758 Covid-19 deaths were registered.

But actual death occurrences are the lowest since the week ending March 13 — 10 days before Prime Minister Boris Johnson announced lockdown — confirming the virus is petering out.

But while today’s data shows England is recovering from the Covid-19 crisis, two of the nine regions have shown a slight uptick in deaths from the disease.

All nine regions had fewer overall deaths than the five-year average, meaning no ‘excess deaths’ are being recorded — those which are above what is expected for this time of year.

Excess deaths shot up by thousands during the pandemic, and the fact they have fizzled out is a positive sign the darkest days of the crisis are over.

For much of the worst days of the outbreak Covid-19 deaths far outstripped those linked to flu or pneumonia, dementia, heart disease or other common causes of death.

But the gap has narrowed gradually and those illnesses have once again become more common than the coronavirus.

The provisional number of deaths registered in England and Wales increased in Week 28 is three per cent below the five-year average — the fifth consecutive week this pattern has been observed.

There were 270 fewer deaths than the five-year average in the week ending July 17.

This can be explained by the fact Covid-19 has had a larger impact on those most vulnerable, for example, those who already suffer from a medical condition and those at older ages.

Experts say some of these people who would have likely died over the duration of the year have already died because of Covid-19.

Flu and pneumonia deaths have also been lower than average during Britain’s epidemic, likely because of the measures introduced to curb the spread of Covid-19, meaning other infections were also strangled.

The number of deaths in care homes and hospitals in the week to July 17 was also below the five-year average (140 and 862 deaths lower respectively). 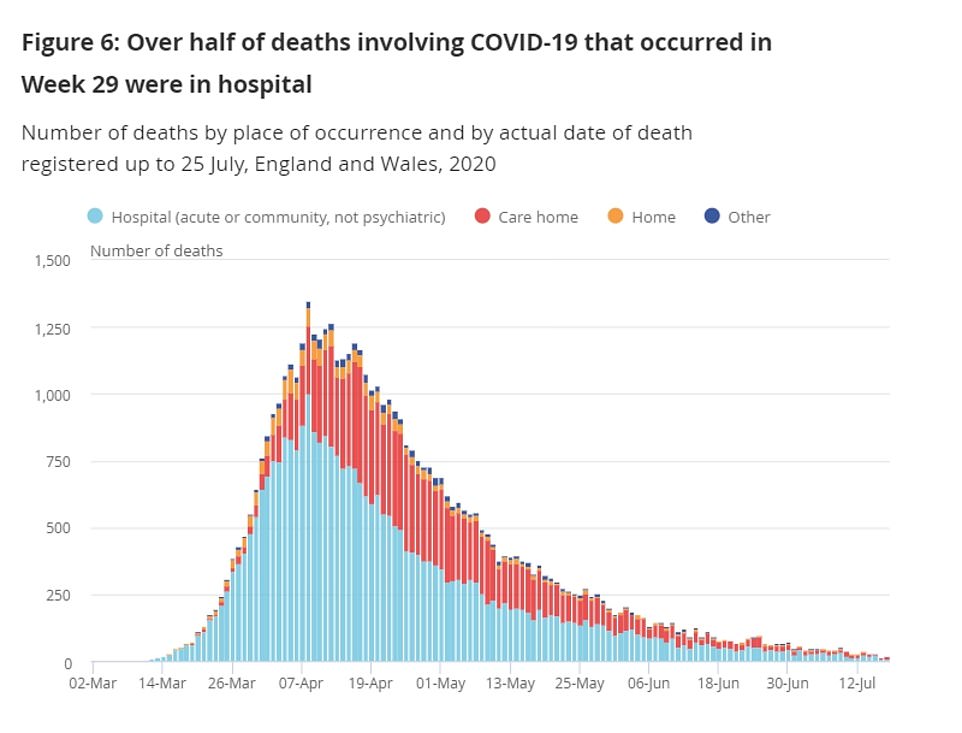 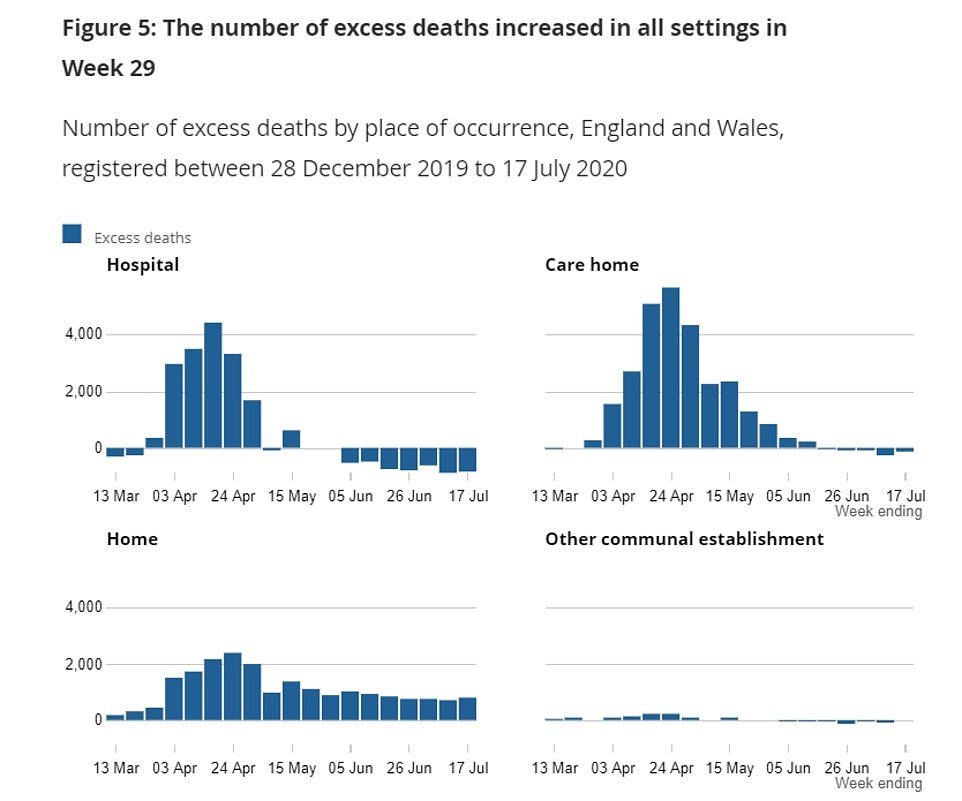 However, the number of deaths in private homes was 766 higher than the five-year average.

There have been excess deaths in private homes every week of this year, and rates are declining much slower than in other settings.

It comes amid fears Britain’s coronavirus outbreak may be growing, after several different sets of data suggested cases are rising again.

The rolling daily average number of new cases was 15 per cent higher yesterday than it was three weeks ago, Department of Health statistics showed.

Health bosses yesterday revealed another 685 people have tested positive for the life-threatening virus, meaning the official size of the outbreak now sits at over 300,000 cases.

Between July 6 and July 16, the daily average was always below 600 except for one day, giving hope cases were on a downward trend. But they have been above 600 for 11 days in a row now.

THE 20 AUTHORITIES WITH THE MOST COVID-19 DEATHS…

… AND THE 20 LOCAL AREAS WITH THE FEWEST FATALITIES