THESE shocking maps show how the Delta variant has become dominant in all corners of the country in a matter of weeks.

The strain is behind several hundreds of thousands of infections each day, as it now makes up around 99 per cent of all cases. 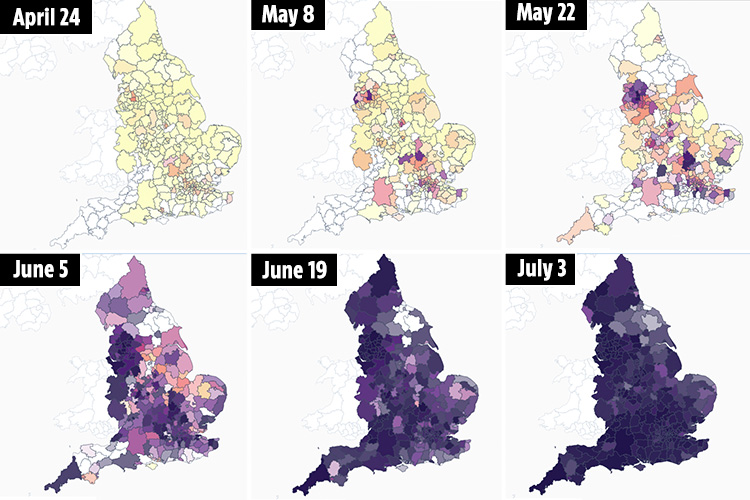 Delta, first identified in India, was first detected in the UK in mid-April.

It was one of three from India that arrived on British soil around the same, but took off at a much more rapid rate.

Its biological advantage of being able to spread faster than any other variant allowed it to become rampant even with some restrictions still in place.

And as measures began to ease, and with millions still unvaccinated, it quickly overtook the Alpha (Kent) variant that had been dominant since December.

Data from the Wellcome Sanger Institute reveals that in almost every local authority of England, the Delta variant is the most prominent strain.

It is now seeding itself in parts of the North East that until now, had been barely touched.

Maps show that around a month ago – on June 12 – several authorities were yet to be overtaken by Delta.

The most recent stats, to July 3, paint a very different picture.

And while cases appeared to have improved in some of the hotspots, they are now on the rise once again.

Cases per week are still highest in North West areas, where the Delta variant first hit.

Original hotspots like Bolton and Blackburn with Darwen had got caseloads right down but are now seeing a surge again.

“There seems to be a misapprehension that life will return to normal from then (July 19), and that we can throw away all the precautions, and frankly, that would be dangerous.”

By comparison, parts of the South West, South East, East and North East are barely seeing five cases of Delta detected per week.

However, the case numbers are not compared to population size (per 100,000), and so may not be reflective of the true outbreak size in each area.

Government data reveals North East England is recording the highest rate of cases comparative to population size, with 750.3 cases per 100,000 people in the seven days to July 7.

It comes as scientists expect the outbreak to only get larger with “Freedom Day” just a week away.

Professor Sir David Spiegelhalter, a statistician from the University of Cambridge, said it is “absolutely inevitable” there will be a “big wave” of coronavirus cases as restrictions are lifted.

He told the BBC’s Andrew Marr show: “Frankly, you know, unless tomorrow an immediate lockdown is announced – which I think is pretty unlikely – there’s bound to be a big wave of cases coming up, absolutely inevitable.

“It was predictable right from the start of the road map announcement back in February.

“Of course it’s been made worse by the Delta variant. And I would guess that, you know, 100,000 a day is quite possible, and relaxing everything at once on July 19 will only make that more likely.”

He said it will be “mainly young cases” – but data shows thousands of vaccinated people are also catching the virus each day. 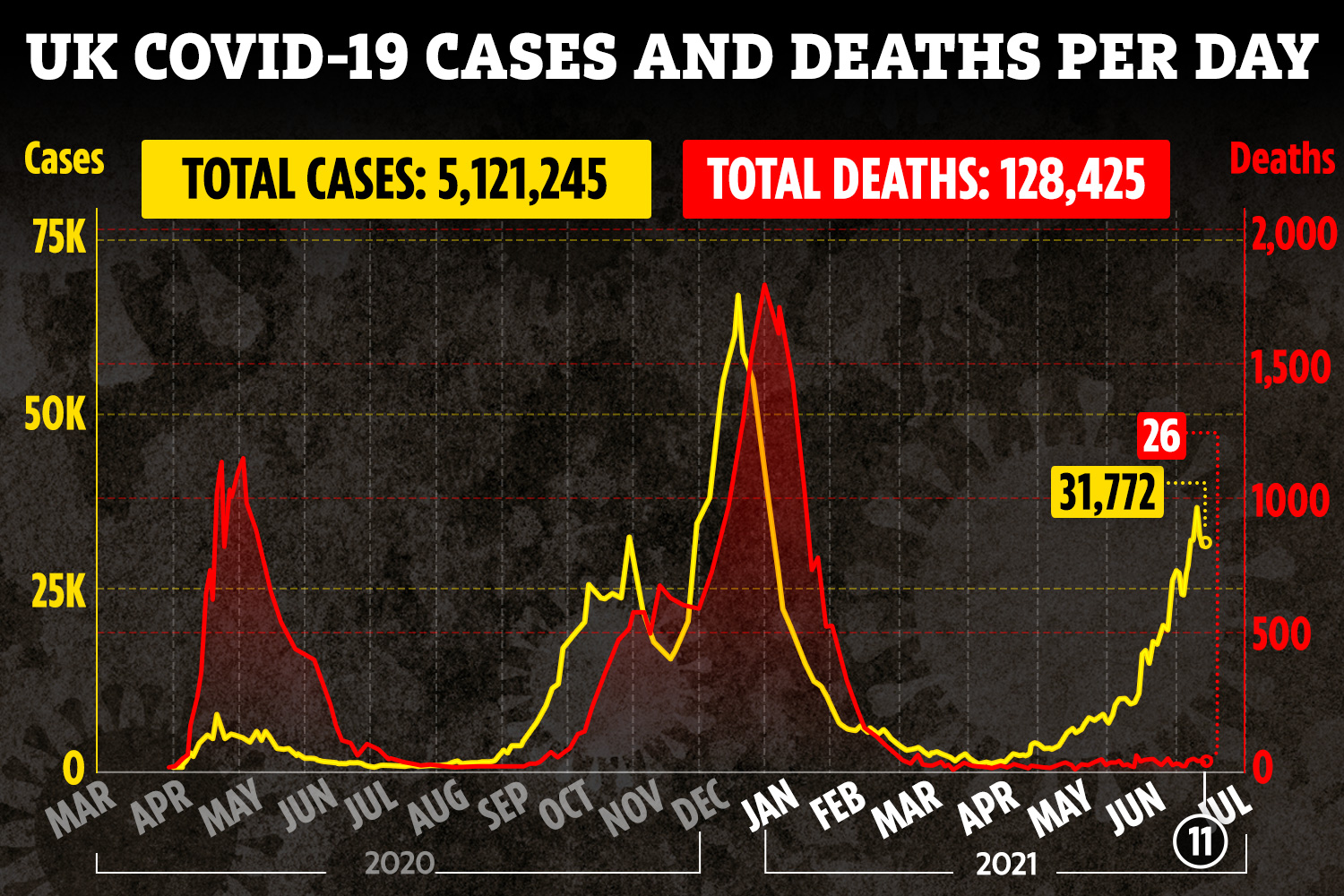 Health Secretary Sajid Javid has already said case numbers could reach 100,000 per day in the summer as measures are eased, while Boris Johnson has warned of 50,000.

Currently an average of 26,500 people are being diagnosed with Covid each day. But there will be many more without symptoms.

The rate of new cases of coronavirus in most areas of England is now back at levels last seen during the winter.

Hospital patient numbers have risen to levels last seen around three months ago, with 2,352 inpatients in England on July 9 – the highest since April 8 and up 46 per cent in one week.

And there has been a very slight increase in the average number of deaths reported each day; 24 as of July 11 compared with 15 a week before.

But this is still far below the sort of numbers seen in January and February of this year (1,135 per day at the peak).

The Academy of Medical Royal Colleges said in a statement: “There is little doubt that things will get worse before they get better.”

Chairwoman Professor Helen Stokes-Lampard said it would be “dangerous” to return to normal on July 19.

“There seems to be a misapprehension that life will return to normal from then (July 19), and that we can throw away all the precautions, and frankly, that would be dangerous.”

Dr Mike Tildesley, a member of the Scientific Pandemic Influenza Group on Modelling (Spi-M) Government advisory panel, urged people to ensure they get their second dose of vaccine due to the “much higher” levels of protection it provides against the Delta variant.

He said the risk “should decrease as we go through August and we get more people vaccinated”.

But he added: “But still, there is a risk with July 19 in terms of exposing more people to infection as a result of further reopening.”

Health minister Edward Argar said today even with a range of 50,000 to 100,000 a day, vaccines are helping to protect people from serious illness and hospital admission.

But it is the issue of rising long Covid cases that scientists are warning of.

Already at least one million people are currently living with long Covid, according to the Office for National Statistics.

And a predicted 500 people per day are now falling into that category for the first time.

Despite concerns, the PM Mr Johnson is expected to push ahead with plans to axe the majority of Covid restrictions next Monday.

The plan to restore our freedoms must come with a warning.

He will reveal his decision whether to go ahead with Freedom Day on July 19 at a Downing Street briefing tonight.

Mr Johnson is expected to say that the country can move to Step 4 of the plan to lift measures, including ending the legal requirement to wear masks.

Quarantine for fully vaccinated travellers returning to the UK from abroad will also be ditched, as will the school bubble system.

Ahead of the announcement, Mr Johnson said: "We are tantalisingly close to the final milestone in our road map out of lockdown, but the plan to restore our freedoms must come with a warning.

"While the phenomenal vaccine rollout has offered every adult some protection against the virus, and the crucial link between cases, hospitalisations and deaths is weakened, the global pandemic is not over yet.

"Cases will rise as we unlock, so as we confirm our plans today, our message will be clear.

“Caution is absolutely vital, and we must all take responsibility so we don't undo our progress, ensuring we continue to protect our NHS."