Coronavirus survivor, 59, was told by doctors that practising deep breathing techniques helped save him from going on a ventilator and earned him the nickname ‘King of the Breathers’

A man who was hospitalised with coronavirus but has since overcome it, believes he may have done so due to practising deep breathing exercises.

Rob Thomas, 59, contracted Covid-19 at the end of March and was sent to Gloucester Royal Hospital where he was admitted to intensive care.

The family of Mr Thomas, who had initially fallen ill with sepsis to make matters worse, was told by doctors that he only had a 50/50 chance of survival during the first three days.

While in hospital, staff told him that his breathing techniques had spared him from being placed on a ventilator. As a result he was coined with the nickname ‘the king of the breathers’. 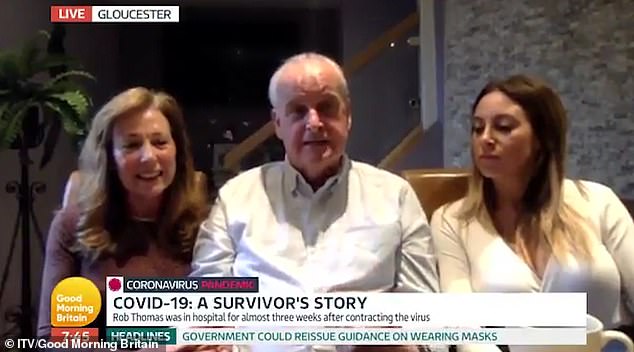 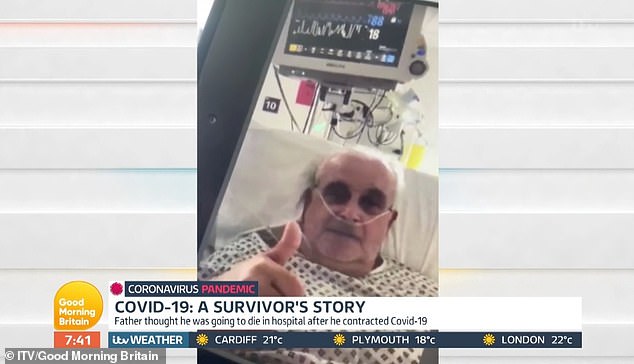 Speaking about the ordeal, Mr Thomas – who was discharged on Sunday – said it was thanks to his sister’s advice that he was able to beat the deadly disease. His sibling, Janice Fawn – who was awarded a CBE for setting up a successful healthcare company – is a retired nurse and told her brother to ‘just keep breathing’.

‘When I came out of ICU and onto a high dependency ward, a doctor came along and he said to me, “Rob, I’ve got to say, you are the king of the breather”,’ he told Good Morning Britain.

‘Before the paramedics collected me, my sister Janice, who is a retired nurse, she was speaking to the family on the phone and she said, “tell Rob to just keep breathing”.

‘I took those words with me and throughout ICU that’s all I did.

‘I just lay there – well I made them sit me upright because I felt like I would suffocate if I lied flat – and I just sat there watching the clock and got into a deep breathing pattern.

‘The doctor did say that they think because of that deep breathing pattern that I got into that saved me going onto a ventilator.’ 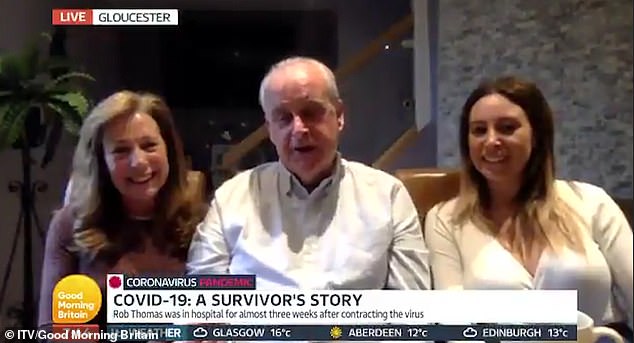 He is currently recovering at their home in Hardwicke, Gloucestershire where the couple had been isolating with daughter Selina, 32, sons Daniel, 35, and Blake, 27, and his girlfriend Hannah Masters, 29.

Mrs Thomas, who has been married to her husband for 40 years, said that the family’s ‘world fell apart’ when he was admitted to hospital.

Mr Thomas was taken there after antibiotics for his sepsis didn’t work and he instead started displaying coronavirus symptoms – including a temperature of 44 degrees Celsius.

‘We just didn’t know if we’d ever see him again,’ she told GMB host Susanna Reid.

‘I have to say, the doctors, nurses, everyone at Gloucester Royal was absolutely amazing.

‘They kept us updated all the time as to how he was, what they were going to do, they were just brilliant, I can’t thank them enough.’ 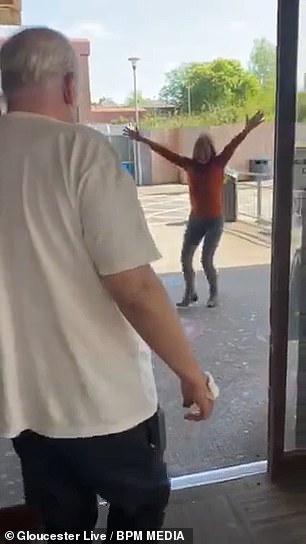 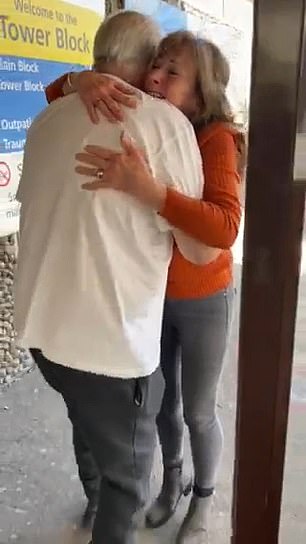 Mr Thomas, a businessman who owns the Renault Trade ‘n Save Centre on Mercia Road, Gloucester; says he owes his life to the staff who looked after him at Gloucester Royal Hospital.

‘I can’t thank GRH enough. The way the function as a team in ICU is unbelievable and without a doubt they saved my life,’ he is quoted as saying by Gloucestershire Live.

‘The high dependency ward is amazing and the staff on 2a who got my lungs functioning and my legs walking again are just outstanding.

‘If I ever I hear anybody moaning about GRH, the tower block or the staff again they will get the sharp end of my tongue because what they are doing inside that hospital is truly amazing.’

His sister Janice has also received his gratitude for the massive part she played too.